Case and motherboard manufacturers need to keep up with storage 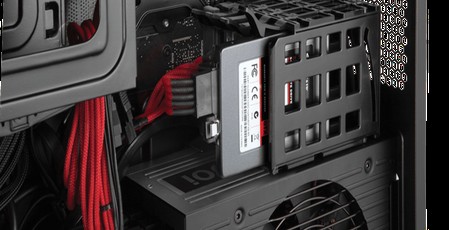 The storage industry has changed a huge amount in the last 10 years. In 2008, SSDs weren't available in usable capacities and were nowhere near as fast or as long-lasting as today's 2.5" SSDs that we generally take for granted. Even with low budget PCs I now tell friends and family that an SSD is an essential bit of kit, yet manufacturers are still not taking advantage of these fantastic devices.

I have issues with both case and motherboard manufacturers here. I'll start with cases, because they're possibly the most annoying, specifically with the lack of ingenuity when it comes to mounting SSDs. My beef here is for several reasons. Firstly, why do we have to screw SSDs into their cages? It's an unnecessarily fiddly way to mount them, and as well as dealing with the four tiny M3 screws in the typical tray everyone now seems to be using, that tray is very often screwed to the chassis by one or more screws. Corsair's old cases such as the Obsidian 350D and 750D allowed you to simply clip SSDs into place, with no screws required, and this is exactly what all cases should do. Yet even Corsair reverted to screws with its most recent addition to its lineup - the Obsidian 500D. Quite why that would be I have no idea, but I'm amazed that so few case manufacturers have come up with simpler ways of installing SSDs given how bomb-proof, vibration-free, and small these devices are. Even if SSD sizes varied, there are loads of ways around this. Which brings me on to my next point - why do we need fixed drive cages and mounting points at all? I have yet to see a truly customisable SSD mount. Sure, you can move trays around to other locations, but what I'd like to see are things such as magnetic SSD mounts so you can place the SSD tray wherever you like (magnets do not affect flash storage), or with aluminium cases simple high-strength adhesive pads. That way, if you want to keep your PSU cover clean and drive-free you can, or if you want to plaster the inside of your case with SSDs to show them off to your mates, you're able to. I can appreciate that many of us want to securely fasten storage drives in case they come loose, but I've come across fairly small magnets that are more than up to the task, and something like 3M's heavy duty clear mounting tape is incredibly strong too.

My second issue is with motherboard manufacturers, specifically with M.2 ports, and I have a couple of bones to pick here too. Firstly, it's with the location. I've tested dozens of heatsink-equipped motherboards in the last 12 months, and a fairly clear pattern emerged when using a Samsung 960 Evo and software to monitor its temperature under load. Small heatsinks were outperforming larger ones despite everything else being equal except for one thing - port position. The more exposed the heatsink was - either by sitting out of the way of components or away from DIMMs and CPU coolers so as to make use of local airflow, the better the temperatures. In fact, the position seems to matter far more than the size of the heatsink.

It's not a critical issue, of course, because it's highly unlikely you'd see your SSD throttle itself unless you're absolutely blitzing data for long periods, but if I can shave 15°C off the load temperature, then like any self-respecting PC enthusiast, I absolutely want to do that. Yet, motherboard manufacturers have not only created M.2 ports where only one port can use the included heatsink, they've placed that heatsink right under a graphics card or crowded it in amongst the CPU socket, GPU, and DIMMs so that it's completely isolated from a case's airflow.

I've found that airflow can have a huge impact, too. After a while, the heatsink becomes saturated and reaches a temperature where it fails to transfer heat away from the SSD, and things get toasty unless you have some sort of airflow over it. This can be from something as simple as a case fan, but when the SSD is stuck amongst components, it's often isolated from this too. Mini-ITX motherboards suffer particularly badly from this issue, and it was the reason why the raised port on the Asus ROG Strix X370-I Gaming performed so much better thermally than with many other boards I've tested; the heatsink sticks right up about an inch above the PCB so is able to take advantage of your case's airflow. Motherboard manufacturers need to take a long, hard look at M.2 port placement and should also consider allowing heatsinks to be moved between top-side ports if they include only one heatsink, so you can install your SSD in the best place for you. That's likely to be in the lower slot, but on many boards I've tested, this slot isn't compatible with the heatsink that fits in the upper slot. Some boards do come equipped with heatsinks for every M.2 port - the MSI X399 Gaming Pco Carbon AC is one example - but I'd like this to be the norm as well as a focus on placing M.2 ports away from hotspots and places devoid of airflow.

Mini-ITX motherboards suffer from yet another issue with M.2 ports, which is SATA compatibility. There are, of course, PCIe- and SATA-powered M.2 SSDs, and both are very useful in this tiny form factor, as they can potentially eliminate the need for cabled storage drives, decreasing clutter and increasing space and therefore airflow inside small cases. With M.2 SATA SSDs essentially costing the same as their 2.5" counterparts now, there's no reason not to choose one instead, especially if you're building a small form factor system.

I'd even go as far as saying that the ideal setup for a premium dinky rig would be to use a PCIe M.2 SSD for your OS and key games and a cheaper SATA-based M.2 SSD for additional programs and storage, assuming your motherboard has two M.2 ports of course. That's possibly a bit lavish considering how much cheaper hard disk-based storage is - a 1TB WD Blue M.2 SATA SSD will still set you back £240 compared to around £40 for a hard disk, but the SSD will offer significantly faster speeds, making it perfect for storing data for content creation and lesser-used games, and it would also mean all your storage is mounted on the PCB rather than in separate drives. A mini-ITX panacea maybe, but sadly a setup like this goes against the grain of a lot of mini-ITX motherboards, which strikes me as bizarre.

Take the Asus ROG Strix Z370-I Gaming, for example. It's a fantastic motherboard, but like most of its siblings, the top heatsink-equipped M.2 port is the only slot that's compatible with both PCIe and SATA-based M.2 SSDs. This isn't a problem in itself, but the problem arises when you fill this slot with a speedy PCIe SSD - the logical choice given it has a heatsink - and then need more storage and want to use a cheaper SATA-based M.2 SSD. For some inexplicable reason, the rear slot included on most mini-ITX boards these days is nearly always PCIe only; it doesn't support SATA-based M.2 SSDs, yet this is exactly where you'd want to put that slower, cheaper, and usually cooler-running SSD if you were gunning for a dual M.2 SSD setup as described above.

My issues probably get increasingly niche the further down this page you read, but I do feel there's a need to make the most of all this next-gen storage, and that includes making our lives easier as PC builders; case manufacturers especially have an opportunity to offer some real innovation. 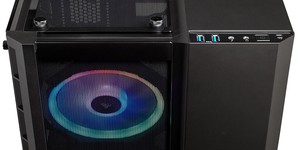