Battle Brothers: A Strategy Game Well Worth Your Time 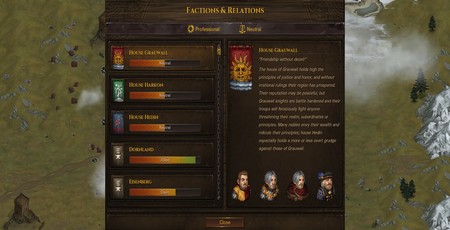 Battle Brothers passed us by when it emerged from its Early Access cocoon back in March and became a fully fledged butterfly release for PC on Steam.

That was a critical error, and if Battle Brothers has taught me anything during the last week I've spent completely absorbed with the game, it's that errors, no matter how minor, are always punished.

You can explain Battle Brothers simply: It casts you in the role of captain of a mercenary company, thrust into said role after a brutal ambush decimates your company. From there, you'll build the outfit back into something respectable, plying your trade to a variety of towns around the place. To understand how it plays mechanically, we need a few touchstones. The game's world map and systems feel a lot like Mount and Blade, with you trudging from town to town hiring soldiers, acquiring food and provisions to survive on the road, and picking up missions to try to earn enough money to keep everyone fed and the payroll paid.

It looks distinctly like Mount and Blade, with the similarities going as far as to replicate annoyances like chasing a smaller group of soldiers across the world map as they endlessly outpace you.

Then you get into battle, and it feels like a cross between XCOM's unforgiving violence and Vandal Hearts, a PS1 strategy game that's definitely not the worst place to take inspiration from. Combat is turn-based chaos with characters jumping into action as quick as their initiative will allow. A single attack is enough to inflict serious wounds: a punctured leg muscle, a torn open hand, perhaps a concussion. Armour, then, is essential. People that can break armour quickly become equally as valuable. Marathon slogs as you try to take down your enemy quickly become simple when you send in a man with an axe to shatter his shield under mighty blows. 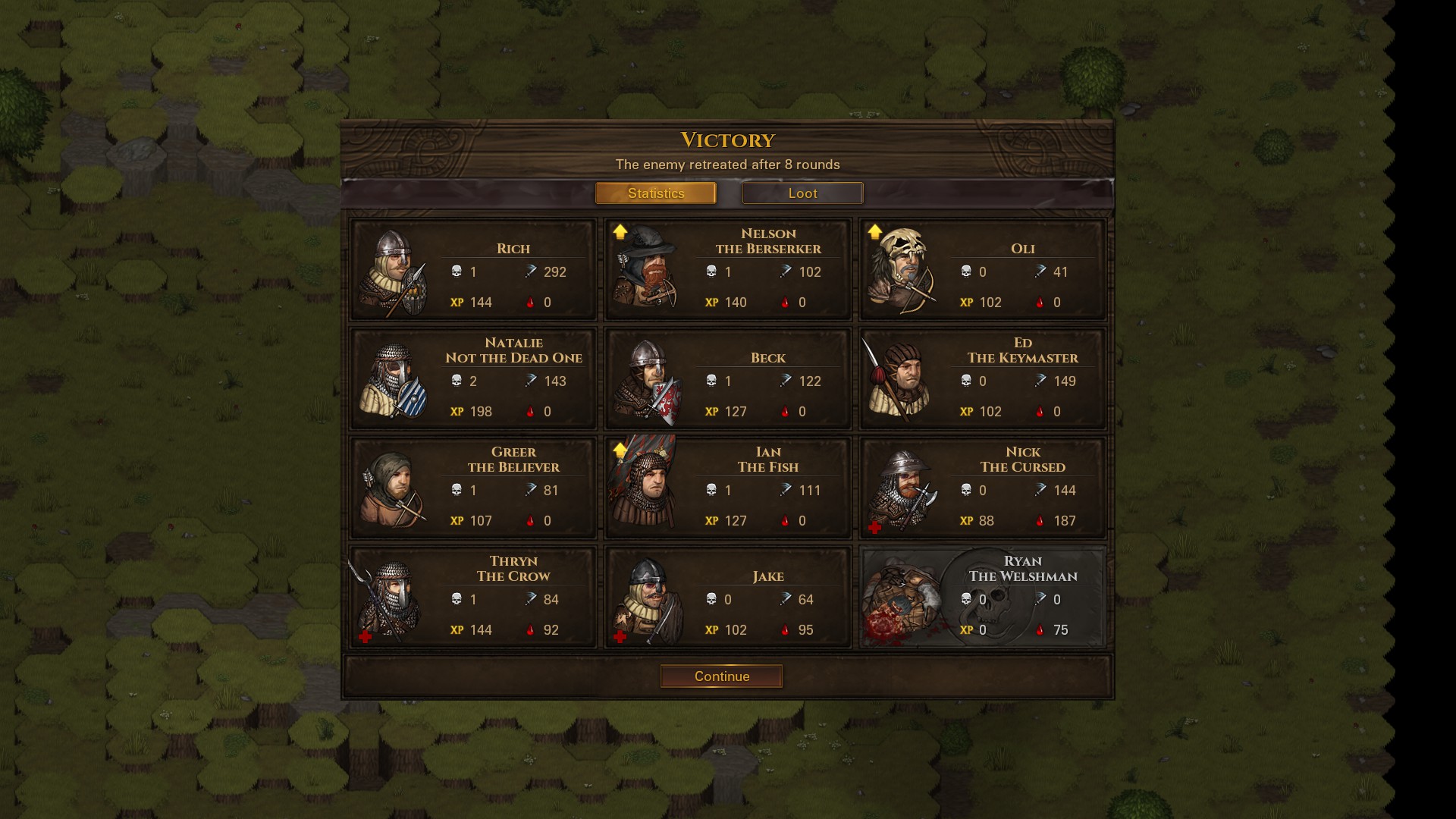 One of the biggest problems in Battle Brothers is how much information is obscured here, with most of the information during the combat tucked away. Percentages to hit are hidden in a small font at the top of a target card that pops up when you hover over people, and quite often I'd fail to notice a friendly character had died until I got to the end screen and saw one of my shieldmen took a flail to the face during the last encounter and probably wouldn't be returning for Battle Brothers 2.

The lethality is really satisfying, and when a group of crossbow-wielding allies cuts down a posse of brigands or dire wolves, it's an engaging experience. 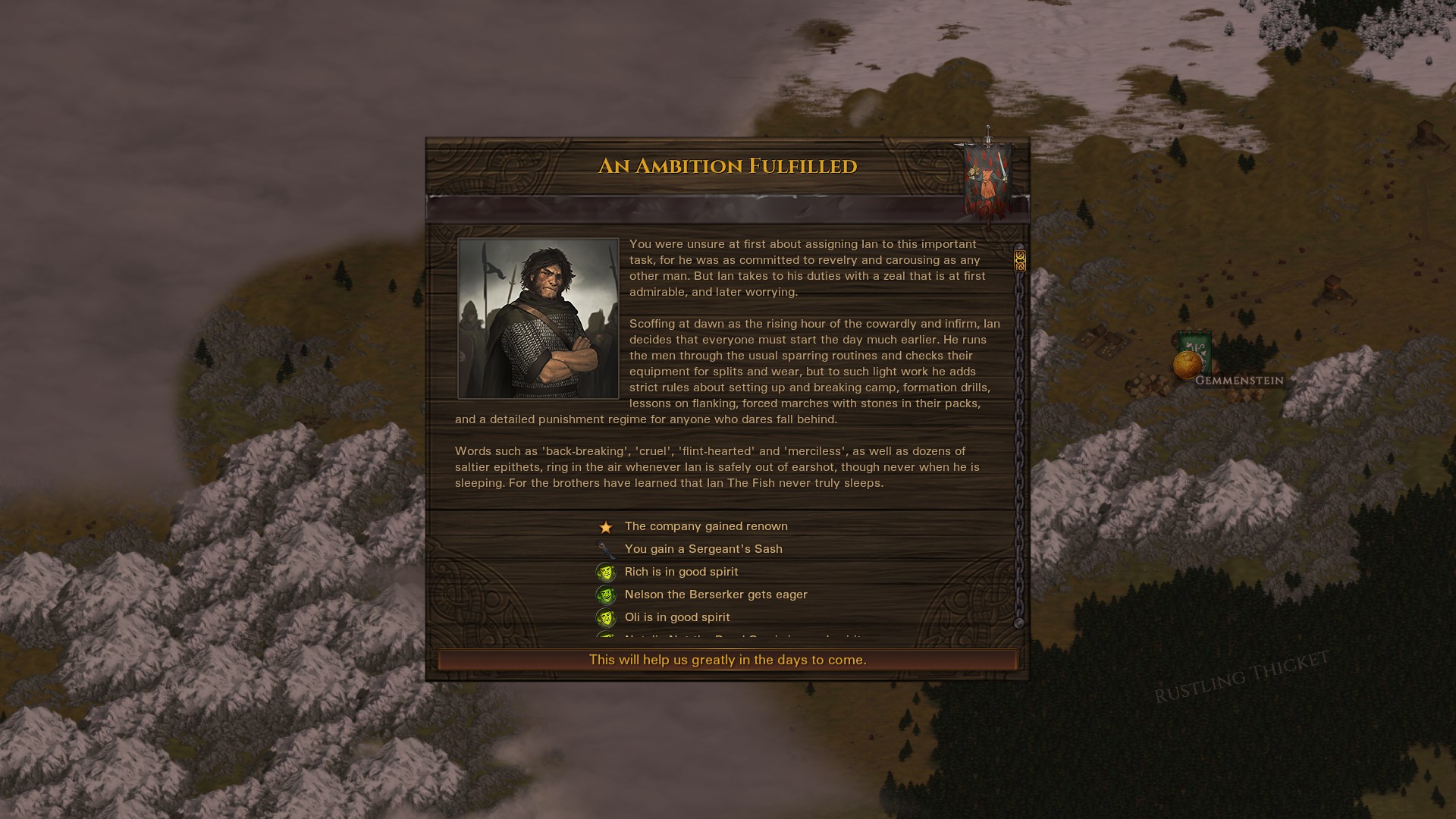 While death does come frequently, it rarely feels too punishing. Each character earns experience points and levels up quite quickly, allowing you to assign bonuses to their stats. Each soldier under your command has stats that they specialise in, meaning that soldiers will develop faster if you level them up according to their specialised areas. They'll also pick up perks, which can be used together, as is your whim.

Losing your level five soldier, then, hurts, but the progress is so quick that you'll not feel too bitter about it. That at least is what I've been telling myself since a routine encounter last night cost me my level seven, axe-wielding badass after I got a bit complacent. The perks feel like valuable choices, paired best with a unit's loadout and individual talents. A tank clad in chainmail and clutching a heater shield could become a real tank by taking a perk that gives him 25 percent extra hit points, but an archer might have to choose between a perk that makes them more likely to hit after missing a shot or the ability to do critical damage more often.

You can field 12 mercenaries at a time, so there's plenty of room to experiment with different styles of play, but it also allows you to constantly be training up new prospects, so that when your star gets torn in half by a zombie, things don't completely fall apart like they do in the most recent XCOM iterations. Yeah, I said zombies. Officially, Battle Brothers is low fantasy, but in the last 10 hours or so of gameplay, I've encountered zombies that come back to life after you've killed them, skeleton knights, necromancers, several different varieties of Orc, and some werewolves that feed on dead bodies to get stronger. They're easy to deal with at first, but as soon as they snack on a few bodies, they can tear through your soldiers.

There are lots of gibs floating around the place, and your guys - they're all guys - can cleave a man in two or decapitate someone in a single stroke. This is true of the enemies, too, and if you were a fan of a particular character on your team, it's nearly inevitably they'll be the ones that have their intestines pulled out in the last round of combat. The game also lets you buy dogs and other animals for use in battle. Watching your beloved dog get torn apart is difficult to handle, but Battle Brothers isn't a game that plays fair. This isn't a real review. It came out in March, and I only discovered it a week ago. However, this is a firm recommendation. It's XCOM-esque, sure, but that genre is so limited: With XCOM and its closest competitors all asking you to defend humanity in a similar way, the idea of running a group of mercenaries in a medieval, low fantasy world is just a nice breath of fresh air. It might be a bit too unforgiving for some, and the signposting isn't great, but that doesn't mean you shouldn't give it a go. Trust me.