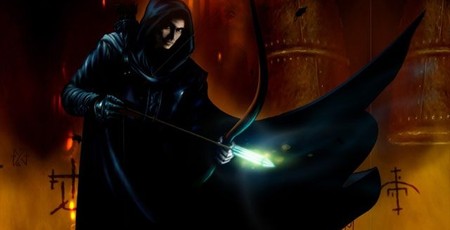 Thief II is generally considered to be the game that got Thief right. I’ve often felt like this assumption is unfair on the first game, which is a groundbreaking masterpiece that paved the way for a whole new genre. I was hoping to argue for this when I returned to Thief II in anticipation of its 20th anniversary. But the truth is that, yes, Thief II really is the game that got Thief right. The key difference between Thief: The Dark Project and its sequel is this. When Looking Glass made Thief, they didn’t know what game they were making until relatively late in the project. For much of its early development, Thief was a fantasy RPG called Dark Camelot, and when it transitioned into a stealth game, Looking Glass were entering uncharted territory. The studio essentially had to invent a bunch of new mechanics to make it work, light-based stealth, AI that had three states of awareness, realistic sound propagation, all of these were necessary to create Thief’s fundamental experience.

The veterans of Looking Glass have frequently stated the game was a hot mess until near the end of development. Some of those rough edges are still visible in the final product. It’s why the levels don’t always feel attuned to sneaking around. Why there are so many odd fantasy creatures knocking about. Why the latter third of the game is so much weaker than the rest. With Thief II, Looking Glass knew exactly what game they were making. They’d cut their teeth on Thief, made all the rookie mistakes and knew exactly how to correct them. What Thief II does it maximise the original’s stealth concept. Looking Glass looked at what they’d done with Thief and thought “OK, now we know what we’re doing, how do we make the most out of it?” The result is a tour-de-force of sneaking and stealing that, two decades on from release, remains the best pure stealth game ever made.

From the opening cutscene, there’s a boldness and confidence to Thief II that separates it from that initial, more furtive experience. “I’ve always acquainted feelings with getting caught. Both get in the way of my money,” Garrett says as he outlines the premise of the first mission – Running Interference. Here, you need to clear a path through a manor house for your friend and fence Basso, who’s fallen in love with a serving maid of the house and wants to quietly free her from that service. This mission sets the tone for Thief II. Whereas The Dark Project was all about Garrett pulling off the ultimate score, only to find himself caught up in events that went way beyond his pay-grade, Thief II paints him much more directly as the reluctant hero. Although he paints this first mission as an opportunity to make a little profit, ultimately he’s doing it as a favour for Basso. It shows us that Garrett, however much he tries to deny it, has a care for others.

Thief II also offers a more interesting villain than the first game, the Mechanist cult leader Karras. Karras is the perfect antagonist for Garrett. Sly and dissembling, Karras is a master of subterfuge who always goes unseen, and always manages to be one step ahead of the master Thief. He’s like Garrett in a lot of ways. But it’s a mirror image, similar yet inverse. His wheedling, nasal voice is a good example of this, similarly distinctive yet directly opposed to Garrett’s gruff and gravelly tone. Karras is also the lock to Garrett’s lockpick. The architect who builds and outfits the contraptions and security systems which safeguard the city’s treasures in its newly industrial age. The 15 missions of Thief II sport incredible range, throwing out high-stakes, high-concept designs at you.  In one level, you need to frame the deputy chief of the City Watch, breaking into the evidence vault and leaving a trail that leads back to his desk. In another, you must infiltrate First City Bank and Trust and rob what is arguably the most secure location in the entire city. “Now I know I’m a master Thief,” Garrett chuckles when he achieves this “Waltzing right into a bank vault.”

But Thief’s levels are more than just clever, they’re ahead of their time. Certain levels, like “Ambushed” and “Trace the Courier” take place in an open cityscape where you can choose your own paths to get to your objective, climbing over portcullises and slipping through back-alleys to get to your destination. At the time, these offered a glimpse of what1 games would become, a taste of the open-world sandbox that now dominates the industry. Then of course, there’s Life Of the Party, an absolutely massive, semi-open level that offers a whole city’s worth of rooftops for you to explore, including several major buildings such a bank and a couple of manor houses. And the amazing thing is, that’s only half the level! Once you cross the Thieves highway, you then need to infiltrate Angelwatch, the Mechanists’ imposing cathedral tower that looms over the city like a metal thundercloud. This one mission has directly influenced games from Dishonored to Oblivion.

Much of what Thief II does is now bread and butter for many games, although I’d argue that Thief still does them better. But there’s one area where I believe modern games could learn from Thief II, and that’s its approach to difficulty. Playing Thief II on harder difficulties doesn’t just make the game more challenging, by adding more guards and so forth, it completely changes the experience. New objectives are added that require you to find more loot or even completely unique items. You’re also prohibited from killing anyone, because as the game says, you’re a Thief, not a murderer. I love this approach, as it requires you to interact with the game and its environments at a far more granular level. It’s not simply about raw challenge. It’s about exploring every nook and cranny, learning the layout so you know where you can hide in shadows, dump unconscious bodies, and slip past the eyes of guards. It makes each level so much more satisfying to complete.

After Square Enix’s underwhelming reboot, it’s unlikely that we’ll see another Thief game for a long time, possibly ever. But while there are no official Thief games in the works, unofficially, Thief thrives. Since its launch in 2000, over a thousand missions have been created by Thief II’s modding community, including several entire campaigns. The community even celebrated Thief II’s 20th anniversary with a map-making contest, details of which can be found here. Some of these maps are quite astonishing in their ambition, exceeding even the mighty expanse of Life of the Party. The existence and persistence of this dogged community is a testament to Thief II’s appeal. It’s just a perfect meld of storytelling, atmosphere, mechanics, and high-fallutin’ level design, still the high-watermark for stealth gaming, and also one of the best and most distinctive fantasy games ever made.