Back4Blood Preview: The Good, The Bad, and The Ugly 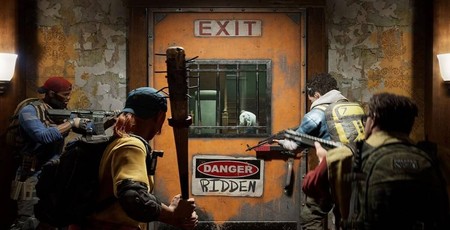 Left4Dead is my favourite cooperative game of all time, as well as one of my favourite games in general. No other co-op experience has come close to replicating the emergent thrills and panicked teamwork of Valve and Turtle Rock’s zombie shooter. It was the game of my young adulthood. I’ve forged lifelong friendships and even a career as a direct consequence of the game.

As such, I’ve wanted a third Left4Dead ever since I finished Left4Dead 2’s final campaign on Expert. Back4Blood proudly promises to be that. Designed by Left4Dead’s original creators, it’s a cooperative shooter that sees four players working together to fight their way through zombie infested environments, moving from safehouse to safehouse before attempting a final, dramatic escape.

I’d hoped playing the recently available Beta would transport me back to one of my favourite periods of gaming. Instead, Back4Blood has left me with more…complex thoughts. I like some of what it does, and there’s enough of Left4Dead’s DNA to make me interested, but I also have some concerns, particularly with the spirit of this spiritual successor. I’ve tried to organise these musings into a comprehensible format, based upon the classic Clint Eastwood western for no reason whatsoever. 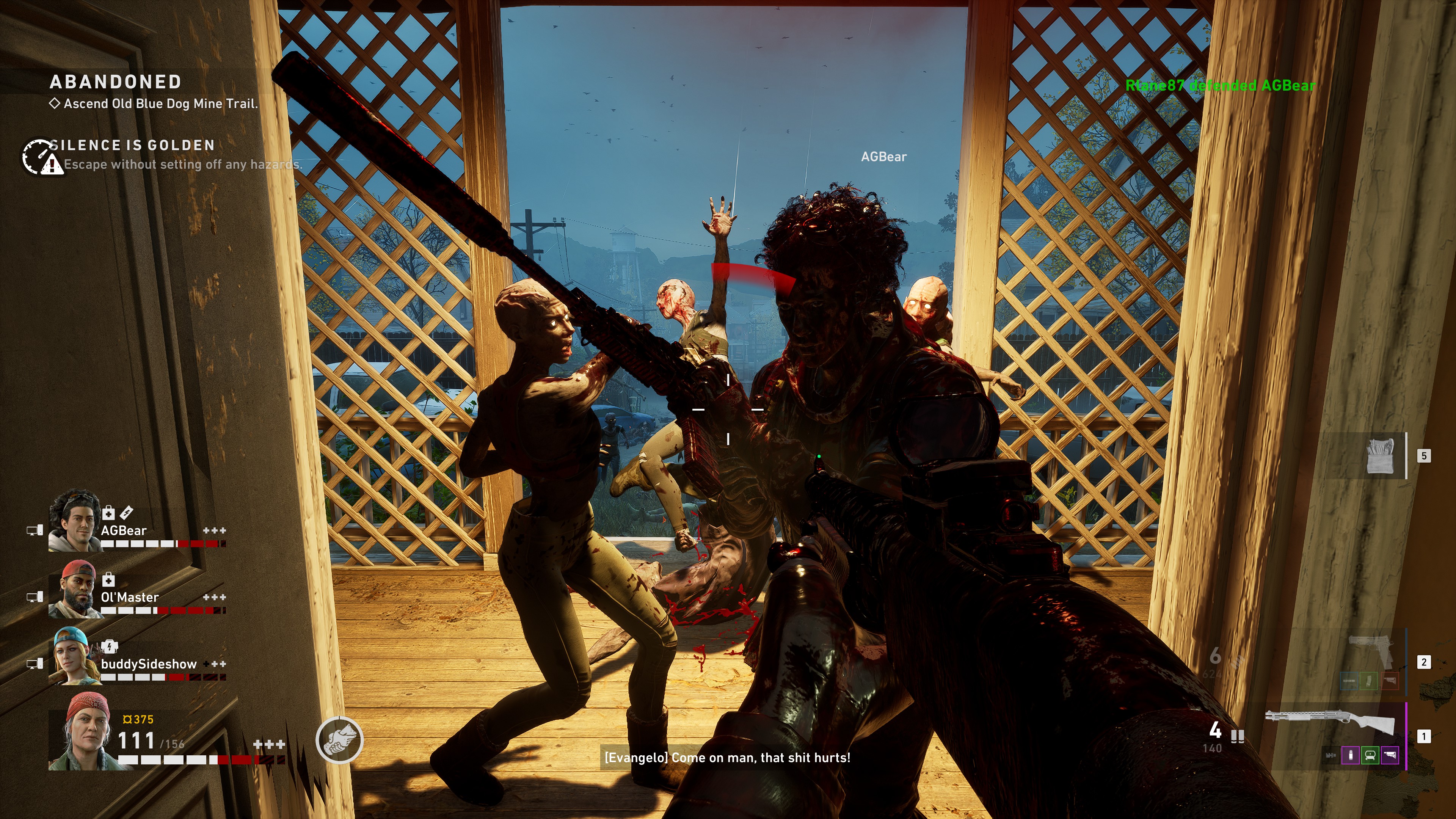 Putting everything else aside, the fundamental structure of Left4Dead is both visible and functional in Back4Blood. I played the beta with friends who I played the original Left4Dead games with, and the knowledge we carried over proved effective in dealing with Back4Blood’s hordes.

The feel of the game is slightly different. Back4Blood is slower and weightier than Left4Dead. While I had reservations initially, I soon found myself enjoying that additional heft, particularly when it comes to weapons. Back4Blood has a much broader array of weaponry than Left4Dead, and I enjoyed experimenting with the various guns on offer, finding one that worked for me. The shotguns are particularly excellent, blasting a Ridden with one of Back4Blood’s boomsticks is always satisfying. 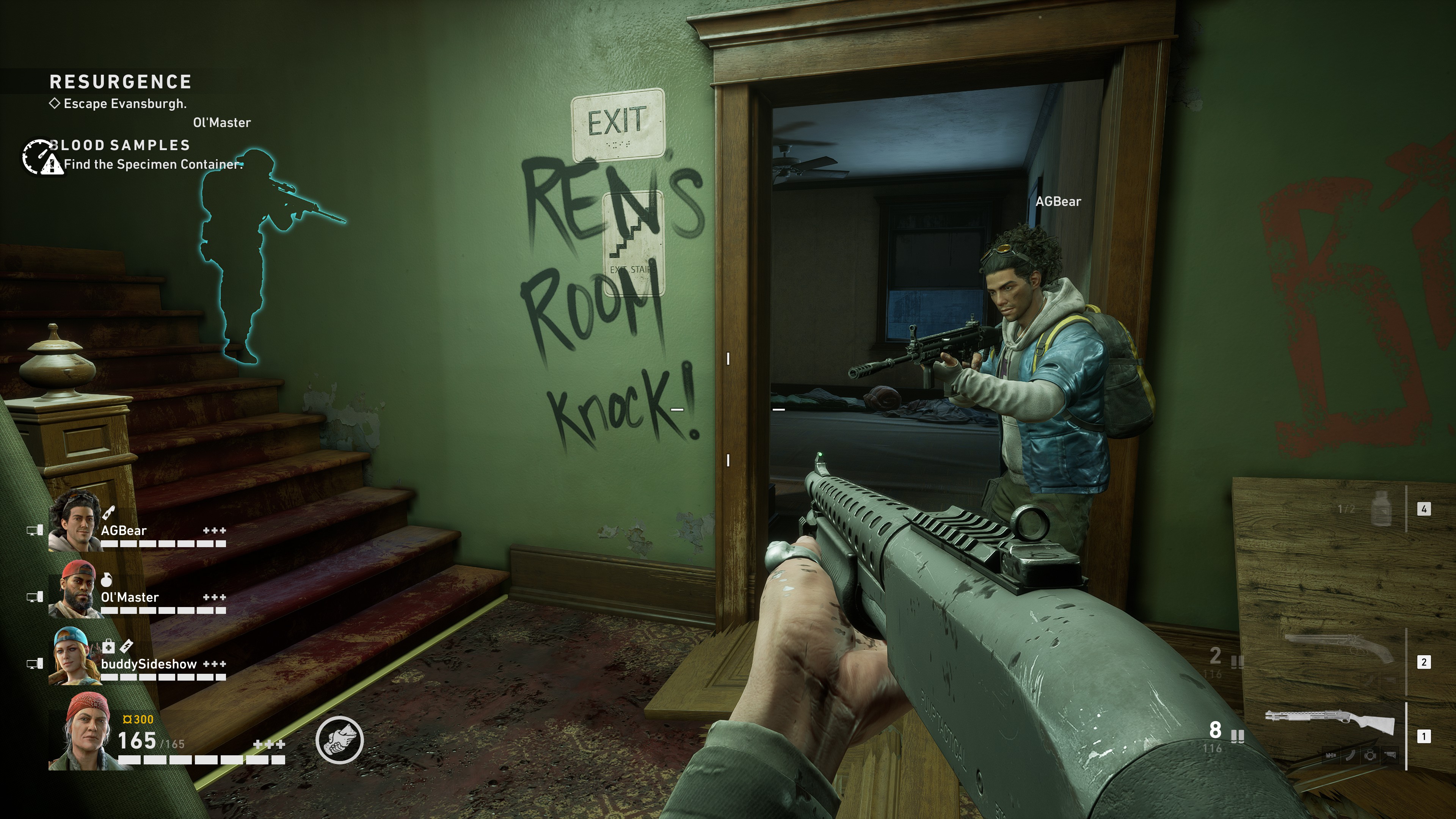 On the subject of guns, one major change from Left4Dead is that weapons are no longer served by a universal ammo pool. Instead, there are four ammo types for each weapon class - pistol/smg, shotgun, assault rifle, and sniper. Your personal ammo pool for each of these types is small, but you can also drop ammo types you’re not using for other players to collect. This encourages players to coordinate their weapon roster. If everyone wields an assault rifle, the team will quickly deplete its ammo reserves.

Such tactical thinking is important, as Back4Blood’s campaigns (known in-game as “Acts”) are significantly longer than Left4Dead’s – with roughly twice the number of stages. Coupled with its own version of the AI Director, this means the intensity between stages can vary dramatically. On the default difficulty, the first half of our campaign playthrough was a cakewalk, but the second half was far more challenging, with the game clearly adjusting to our skill level.

Back4Blood also expands upon the unpredictable nature of Left4Dead. Dotted around the levels are survivor caches that can be unlocked with a special tool. After dying at a particular point close to one of these caches, we resolved to bring a tool with us to open it on the next run. But when we arrived, the cache wasn’t there, forcing us to alter our plans. 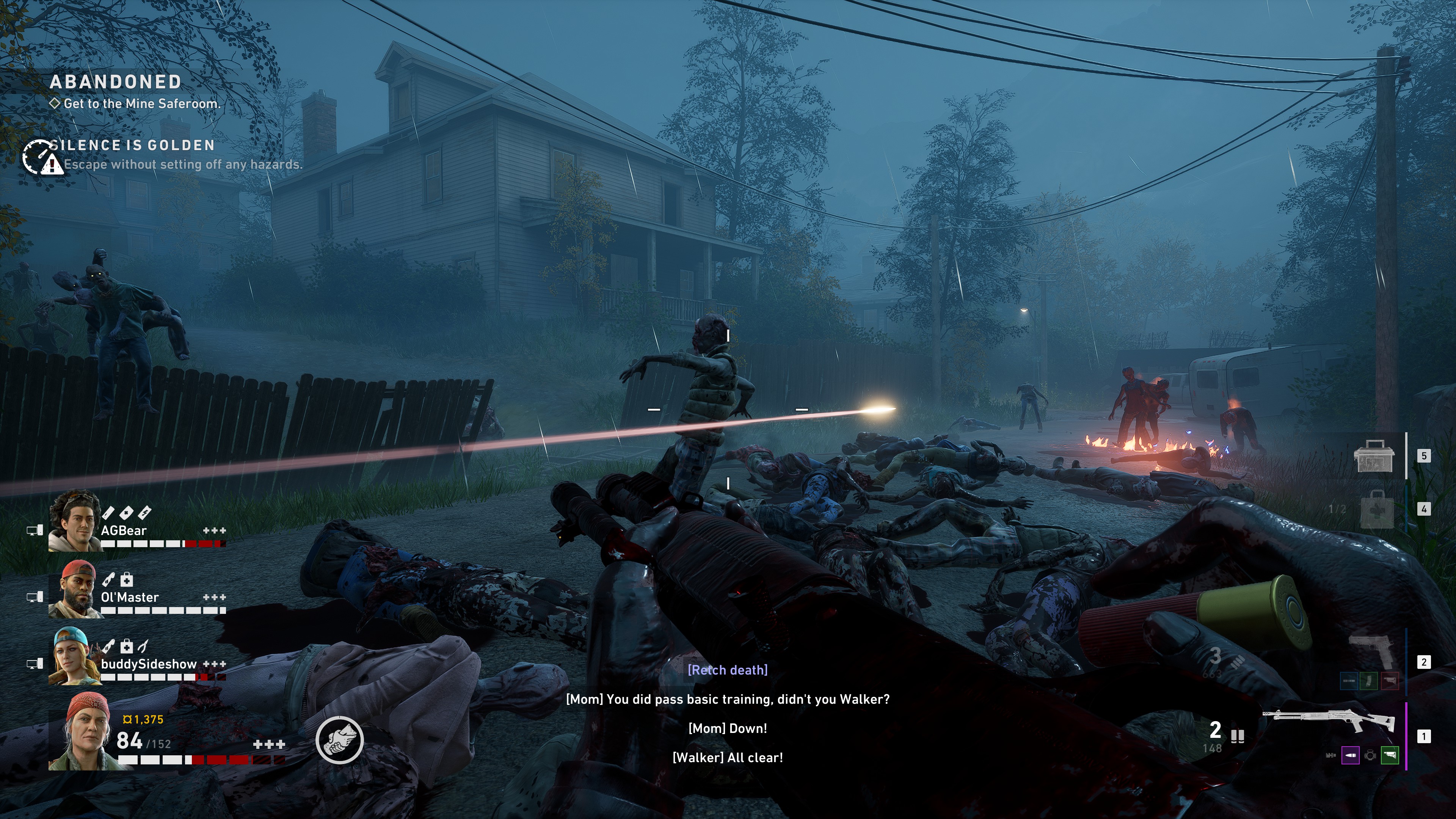 This could be due to familiarity, but I found Back4Blood’s beta campaign far less memorable than anything in Left4Dead. This could be due to the length, or the fact that it treads similar ground to its spiritual predecessor. That said, there were a couple of standout moments. One set-piece sees the team required to blow up a boat, which means fighting your way onto the boat, placing the bombs, and then escaping before they explode.

Another feature I’m unconvinced by is the deck-building. Basically, before a campaign, you get to choose a bunch of survivor cards that provide minor perks, such as extra health or ammo. After each stage, you get to choose one additional card to add into your hand, making your survivor better equipped to face the escalating challenge.

It’s a nice idea, but frankly, the effect of these cards isn’t especially noticeable. It would be better if there were fewer cards that empowered players with more specific, active abilities, which could be deployed to help the team. At present, they feel too much like a box-ticking exercise, rather than a necessary component to the game. 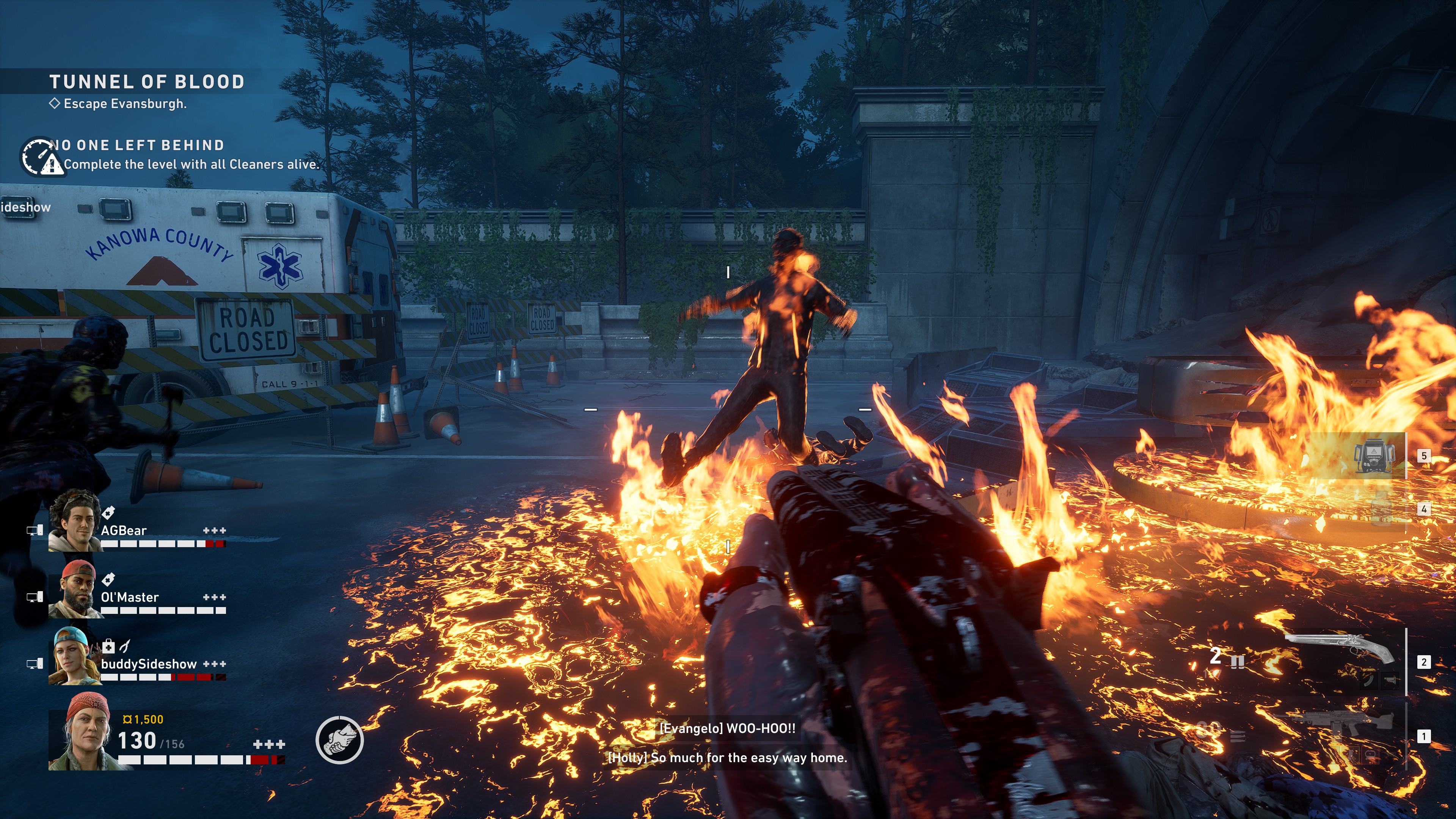 My main issue with Back4Blood is that is seems largely devoid of Left4Dead’s personality. The game has a larger pool of survivors (known bizarrely in-game as “Cleaners”) to choose from, but none of them are particularly memorable. The only one I can recall anything about is Mom, a middle-aged woman, who, at one point during our campaign, told a rather questionable story from her youth about deliberately getting a boy drunk so she could have sex with them. While this led to an amusing running joke in our team about Mom being a dirty old woman, I’m not sure that a story about borderline date-rape is a great way of imbuing personality into your characters.

Suffering from a similar issue are Back4Blood’s “Special Ridden”, the game’s equivalent of Left4Dead’s Special Infected. The latter were a superb combination of funny, frightening, and gross, with each variant playing a specific role in upsetting your teamwork. The Smoker drags one player away, The Hunter pins one to the ground, etc. 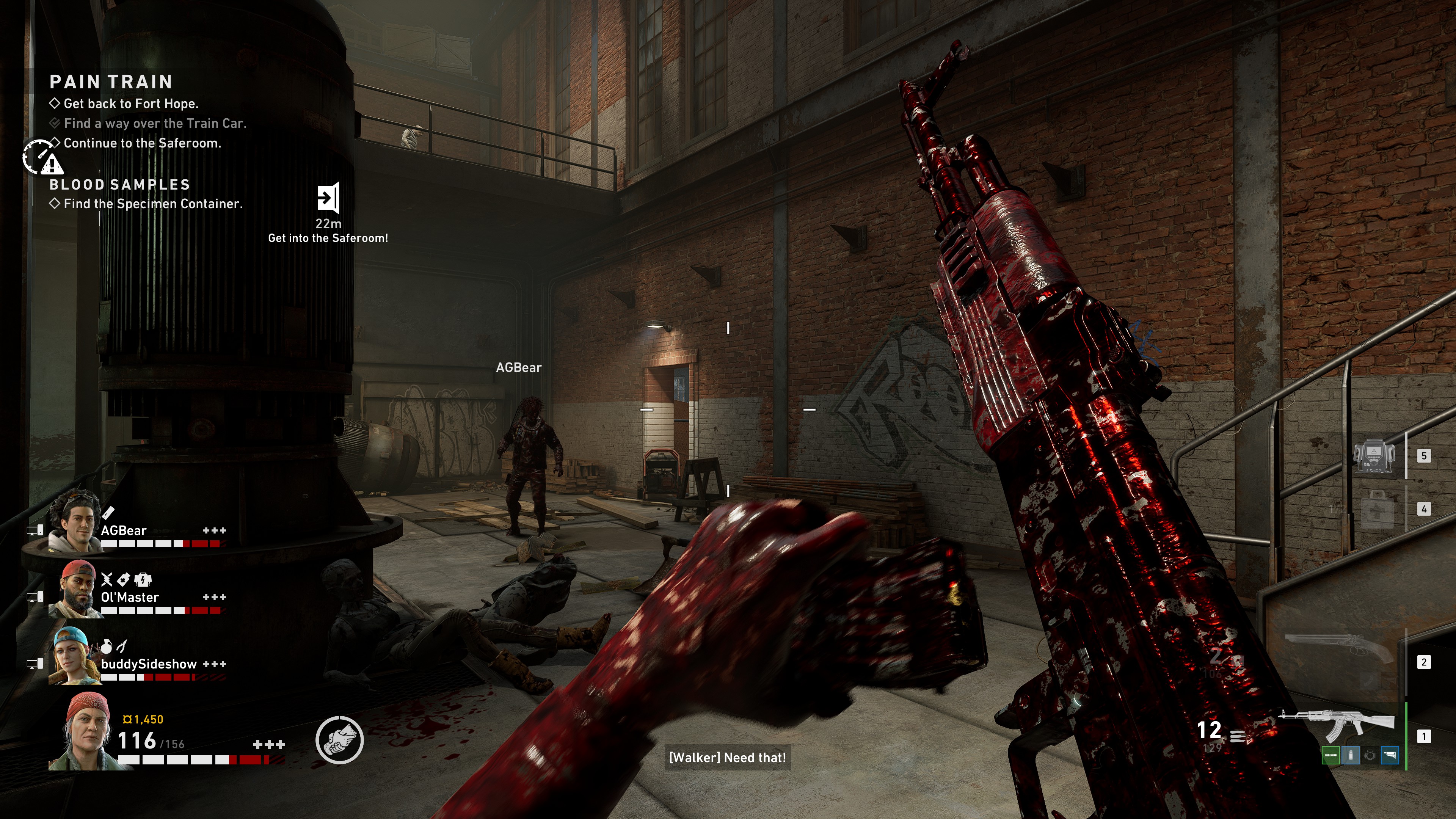 Back4Blood’s “Special Ridden” are nothing like as memorable. Its equivalent of the Boomer, for example, is clumsily named the “Exploder”. The Stinger, meanwhile, is a vague combination of L4D’s Spitter and Hunter, leaping about levels and spitting a sticky goo at survivors that pins them down. The only Special Ridden I found interesting was the Tallboy, a stringy slab of muscle with a powerful hammer-arm that can only be killed by shooting at a small weakspot on the back of its arm. It’s a tough and intimidating creature, but it’s also distinctive where the other Special Ridden are not.

I think Back4Blood will be an enjoyable enough romp, but I worry that it might be suffering from lack of vision. The survivor cards and Cleaner upgrades all feel like bells and whistles that Left4Dead never needed, while visually it appears to be shooting for a more realistic style, which Left4Dead deliberately shied away from, taking more inspiration from goofy horrors like Braindead and Evil Dead 2. Both seem antithetical to Left4Dead’s spirit, and I worry that Back4Blood may end up suffering due to the absence of Valve’s oversight.