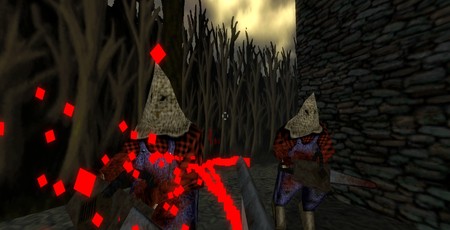 As my father never used to say because he rarely played games, why have one preview of a 90s-inspired FPS when you can have two? I originally planned to look exclusively at Ion Maiden – the “new” Build-engine powered shooter from 3D Realms which launched in Early Access last month. But I completed its (excellent) preview-campaign so quickly that I decided, since we're partying like it's 1996 anyway, I might as well have a dance with Dusk, the upcoming indie love-letter to Quake. Perhaps, I thought, this would result in some kind of deep and meaningful insight into the growing trend of 90s-inspired shooters.

To be honest, the reason for the prevalence of games like Strafe and Dusk and Ion Maiden is simply that people like me are getting older, and the fad for eighties nostalgia is slowly shifting into a fad for nineties nostalgia. 'Hey kids (world-weary thirtysomethings)! Remember the days before mouse-look and hardware acceleration? Weren't those just the worst (best)? For the measly sum of £14.99, I'll give you memories.' While I always have reservations about games that peddle nostalgia as their defining characteristic, it's hard to be too cynical about either Ion Maiden or Dusk. Both are shaping up to be genuinely cracking games, nailing their respective aesthetics and (for the most part) feel, while carefully filtering out all the rubbish bits of old shooters that we conveniently forget about.

Let's start with Ion Maiden, which is apparently a prequel to the 2014 ARPG Bombshell that I hadn't heard of until I Googled it right this second. This isn't surprising, since Bombshell looks about as memorable as a Transformers movie. I can't help but wonder why 3D Realms decided to frame the game in this manner. Perhaps Bombshell has some secret yet massive fanbase living in a hidden city beneath Antarctica or something. I suppose it doesn't matter, since Ion Maiden instantly grabs your attention through it's use of the wonderful Build engine as the basis for its tech, as well as its stylistic resemblance to Duke Nukem 3D. You play as Shelley “Bombshell” Harrison (who got her nickname because she's good at disposing bombs apparently), a future-cop battling her way through Washington DC as a group of cyborg-terrorists attempt to level the city.

It's a delightful throwback to the later years of 2.5D shooters. Movement is ludicrously slick, gunshots are deep and scratchy, enemies tend to explode in oodles of gibs, and the levels are mazy and stuffed full of secrets. What I particularly like about the game, however, is how it uses the build-engine as an aesthetic while taking advantage of the power of modern PCs. The levels are detailed in ways that would be impossible for a mid-nineties computer to render. When you step into the streets early in the campaign, the towering cityscape seems to stretch for miles beyond the play-area. Developers Voidpoint (who are Build modding enthusiasts) also up the destructive ante, with looming skyscrapters splitting and collapsing in pixelated piles of rubble. It is, all told, a beautiful and breathless return, although I have a few quibbles. The enemy roster, while perfectly acceptable cannon-fodder, doesn't demonstrate the same imagination seen in Duke 3D's pig-cops or Doom's ferocious Hellspawn. Currently, they're various shades of “dude with gun” plus a few spiders that are no fun to fight at all.

My other issue is that Harrison's barks fall a bit flat, particularly the painfully on-the-nose references to films like The Matrix. I like the decision to go with a badass female lead as a way of separating itself from Duke Nukem, but the barks would sound boneheaded even if they were coming from Duke, which is a shame. It's also worth noting that the preview campaign is really short, and although I liked what I saw, there's no way it's worth the current asking price. The case is slightly different with Dusk, which has more meat on its bones, and in more ways than one. While Ion Maiden brings us the halcyon days of when enemy corpses turned around with you, Dusk conjures a superb re-imagining of the start of full 3D graphics, when your opponents were chunky blocks of polygons hammered roughly into shape.

Indeed, as with Ion Maiden, Dusk takes this visual roughness and runs with it as an aesthetic, taking as its setting a rural American backwater immersed in a bucket of horror-movie chum. Here you'll fight through squat farmhouses and blocky cornfields against sackcloth-wearing, chainsaw-wielding maniacs, and dodge fireballs conjured by wizards wearing KKK-esque robes. Dusk takes a little bit longer to get going than Ion Maiden. The opening missions are a little underwhelming, short and linear and structurally rote, while the pistol and the first shotgun you acquire don't have the same immediate satisfaction as Ion Maiden's cracking arsenal. Once the game starts throwing enemies at your properly, however, Dusk becomes utterly thrilling. Weaving through hordes of undead cows and shotgun-toting scarecrows, blasting enemies into meaty chunks with the game's monstrous super-shotgun. The level design becomes much more elaborate too, toying with the player through a combination of traps, enemy ambushes, and portals.

My favourite aspect of Dusk, however, is how it takes this style and concept and builds something entirely new with it. The hillbilly-horror setting works superbly with its chunky, lo-fi graphics, but it also sets the game apart from its inspirations, making it feel less of a modern mimic and more like a lost treasure that was sealed in a time-capsule in 1996. There are naturally some concessions to modernity, such as mouse-look and hardware acceleration and all that. But if you stuck Dusk in a time machine and sent it back twenty years, I doubt it would raise that many suspicions in whoever picked it up. There are a couple of problems. While for the most part I like the game's feel, enemies are a bit spongy in terms of how they respond to being shot, remaining unmoved by your attacks until they die. I'm also not a fan of how your guns float unsupported in front of you, with no sense of connection to your avatar. It's the one area where Dusk's indie heritage stood out amongst its otherwise convincing imitation.

A broader concern with both games is how deeply they're likely to explore and elaborate upon the FPS tropes and conventions that each draws upon. I think it's fantastic that developers can viably take what was a technical limitation twenty years ago and use it as an aesthetic, but I'd also like to see a bit more than “remember THIS?!” from both games. Each has potential in this manner – Ion Maiden in its female protagonist and Dusk in its distinct horror setting. But since both games are unfinished, the jury is still out on whether they will have that substance to accompany their respective styles. That said, I can't deny that I had an absolutely rocking time with both, and it's both wonderful and a little bit crazy to play two games inspired by 1996 shooters that look and feel so different. What a strange and splendid time to be a fan of video games.