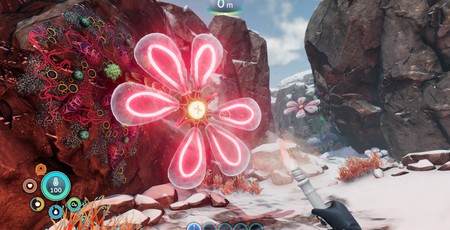 Subnautica: Below Zero is the sequel to the 2018 underwater survival game, which is my pick for the best survival game ever made. Below Zero is largely similar to its predecessor, which means the overall quality is also more or less the same (i.e. extremely good). That said, there are several areas where Below Zero differs from the original, and those changes nudge the quality of the game in slightly different directions.

So rather than doing a straightforward review, I wanted to highlight these specific areas where Below Zero differs from Subnautica, discussing how these affect the play experience and broader quality of the game. 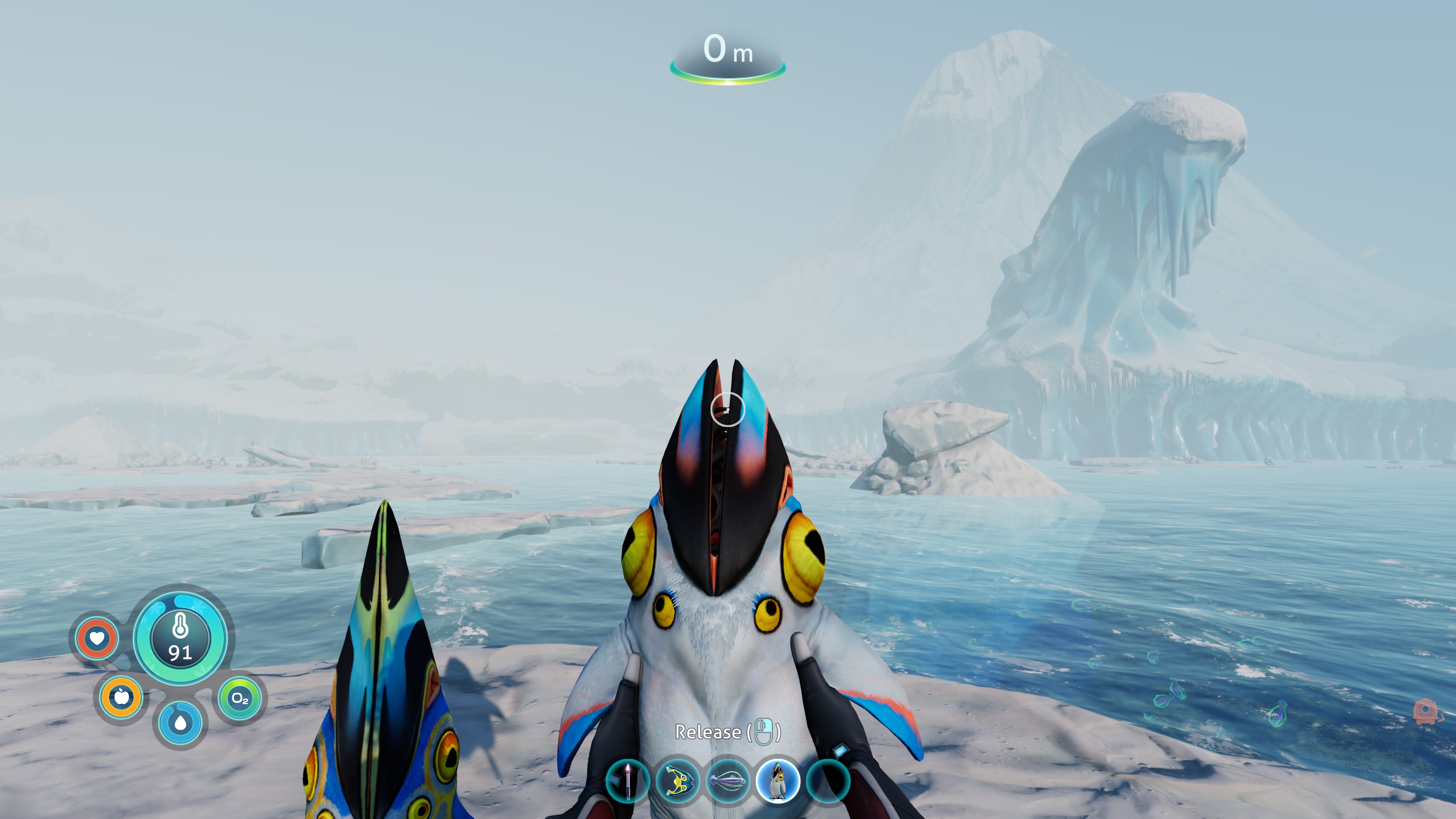 1. Survival is no longer just sea-based

Below Zero takes place on 4546B, the same aquatic planet as the original Subnautica. Rather than being set in a tropical ocean environment, you instead explore the game’s Arctic region. This has several implications for the game as a whole, but the most significant is you spend considerably more time on land than in Subnautica. From glacial bays to polar tundra, about 30% of the game’s overall running time is spent traversing terrestrial environments.

This added emphasis on land exploration comes with a new mechanic, temperature. In the same way your O2 depletes while underwater, when on land you have a temperature gauge that gradually ticks down. As you get colder, the edges of the screen start to freeze, your breath becomes visible, and eventually you’ll succumb to hypothermia.

Hence, you need to constantly find ways to stay warm, from standing in warm spots like caves or near heat producing objects like thermal lilies, to consuming certain types of warming foods. In short, Below Zero adds the same fundamental tension to exploring land that you find underwater, meaning you’re never 100% safe wherever you travel. 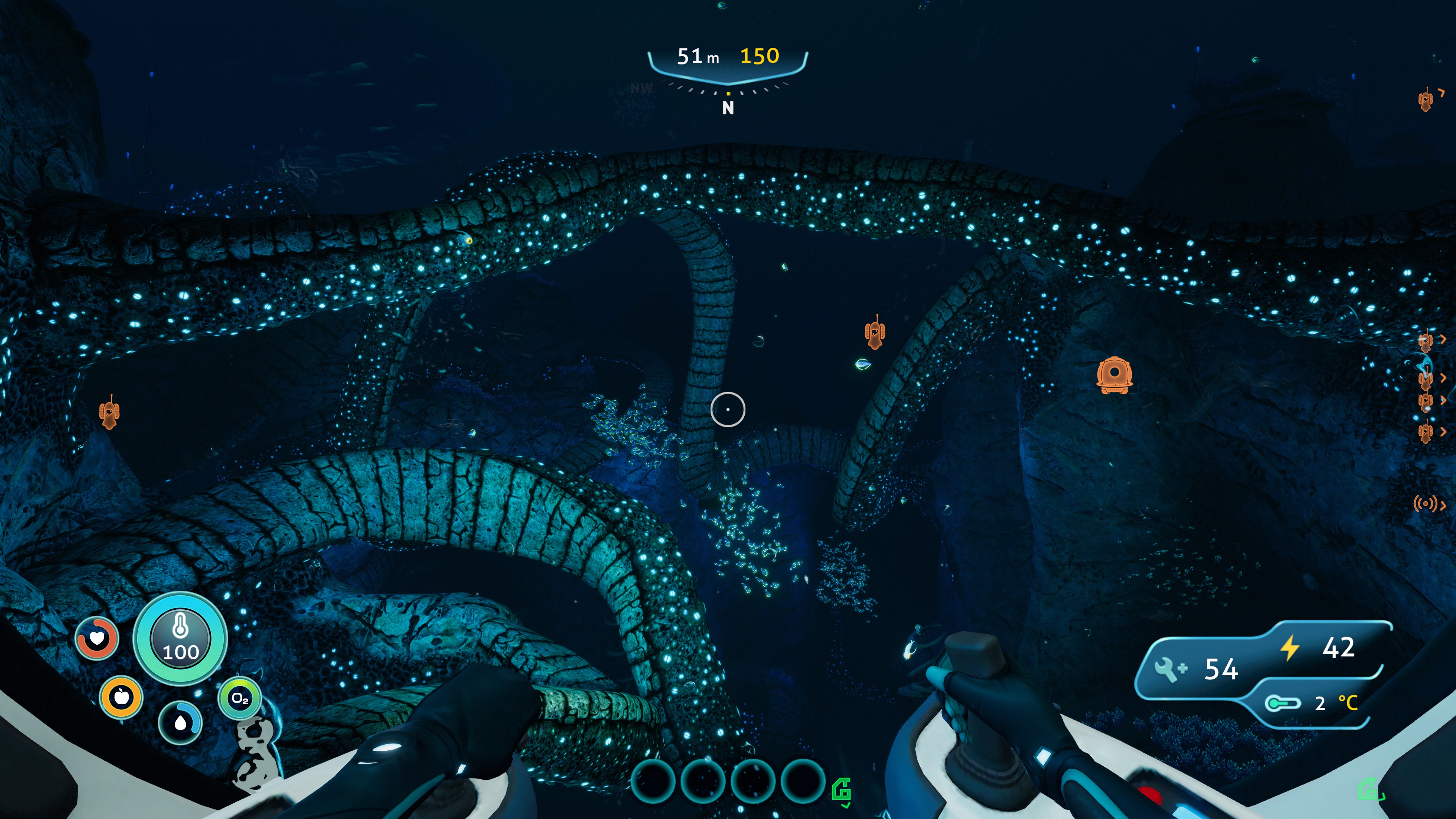 2. The biomes are better than ever

One of Subnautica’s most interesting features was its environmental biomes, which were so weird and interesting compared to most other survival games. Well, Below Zero’s biomes are even better, ranging from vast networks of hydrothermal vents, through giant lilypad forests, to downright alien spaces like the Twisty Bridges.

Land biomes are equally impressive. There are floating archipelagos of tower-block sized icebergs that you can swim under and even through. There are harsh, tundra-like environments such as the Arctic Spires, where fierce winds have created canyons filled with giant spikes of rock. It’s a truly remarkable place to explore, with amazing sights and sounds around every corner. 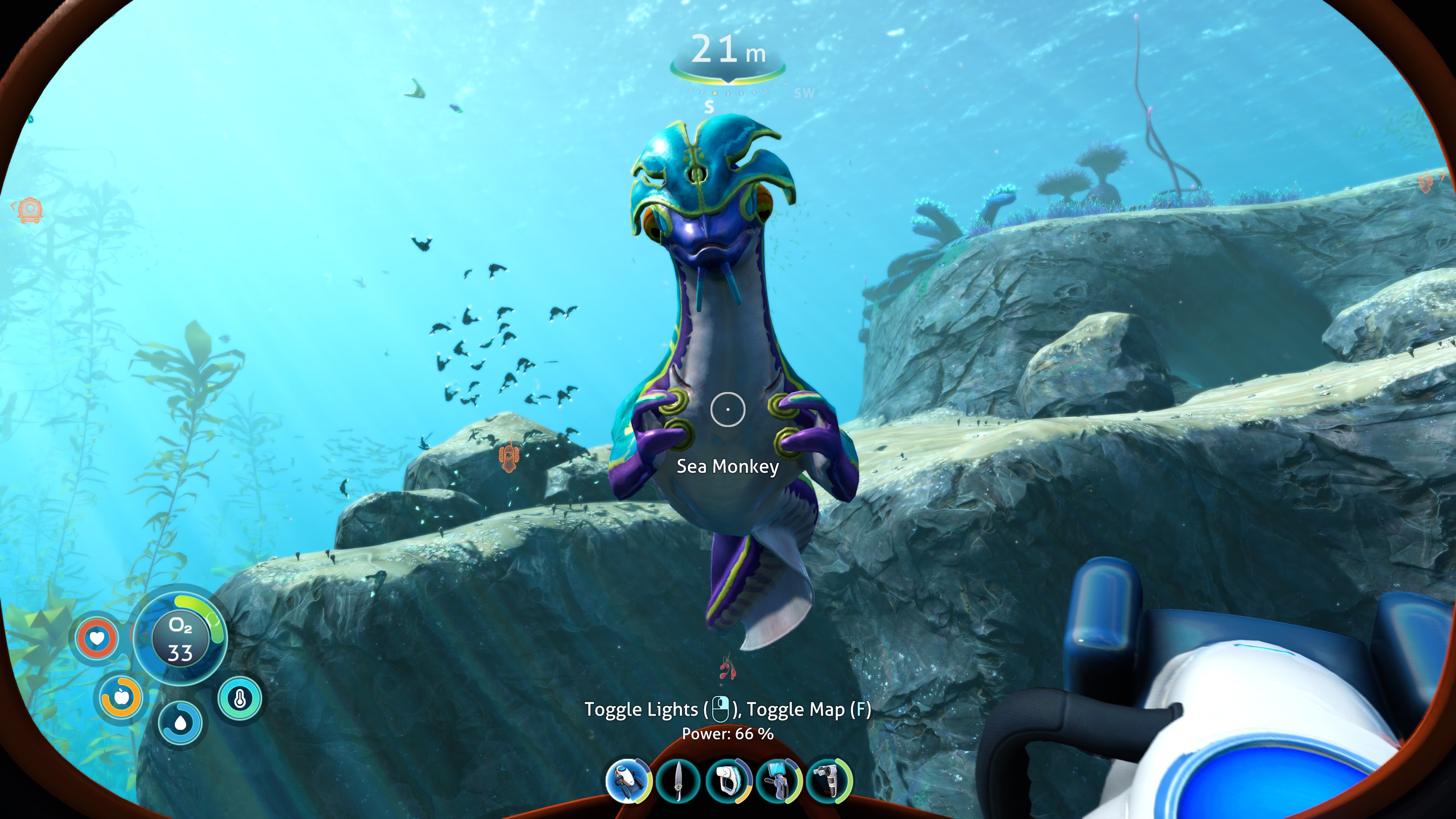 3. Wildlife is more diverse and interactive

As with the biomes, Below Zero’s wildlife is almost entirely new. There are a few familiar faces, such as Bladderfish and Hoopfish and an arctic version of the Peeper. But nearly everything else hasn’t been seen before. This includes several new Leviathan-class creatures that I won’t spoil, but you can be assured are utterly terrifying.

Arguably more interesting, however, are the mid-size fauna, as these can be used in interesting ways. Examples include the Giant Hole Fish, a doughnut-shaped creature whose central hole traps oxygen that you can use to breathe. My favourite new animal is the Sea Monkey, a cheeky little marine mammal that likes to furnish its nest with your technology. Get too close and they’ll try to steal whatever gadget you’re holding in your hand, and you’ll have to wrestle them to get it back. On the plus side, their nests can be used to discover new blueprints, and they can be helpful in other ways too. 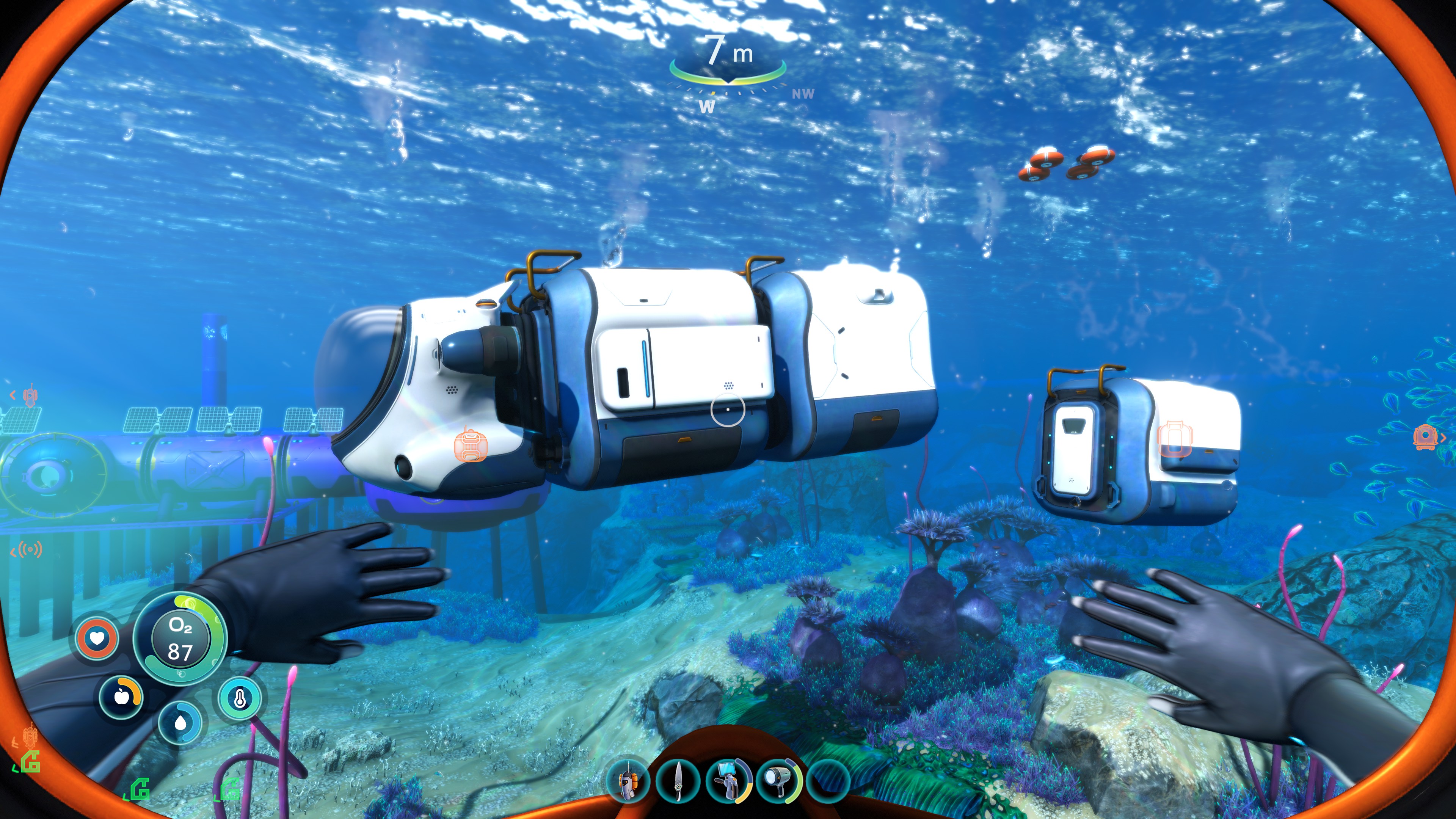 Like Subnautica, Below Zero has three pilotable vehicles. Unlike Subnautica, two of these are new. If you don’t want to know what these are, skip this section and move onto point five. Otherwise, let’s plough on.

The first new vehicle is the Snowfox. A land-specific vehicle, it’s used to speed through the game’s glaciers and tundra, helping you avoid some of the more, aggressive land animals that prowl the polar region. It’s probably the least interesting of Subnautica’s vehicles overall, but it is useful in its limited context.

The second vehicle is the Seatruck, a modular submarine that can act both as nippy scout vehicle and a mobile base. Various modules can be towed behind the Seatruck’s powerful front submersible, including modules for fabrication, storage, and even one designed to carry the Prawn Suit, the one returning vehicle from Subnautica.

The Seatruck is a wonderfully interactive vehicle, especially the way you can detach the front submersible at any time, letting you explore the nooks and crannies of Below Zero’s biomes while keeping useful modules close at hand. That said, these new vehicles aren’t quite as good as Subnautica’s Cyclops and Seamoth, one of two areas where the game falls slightly behind the original. 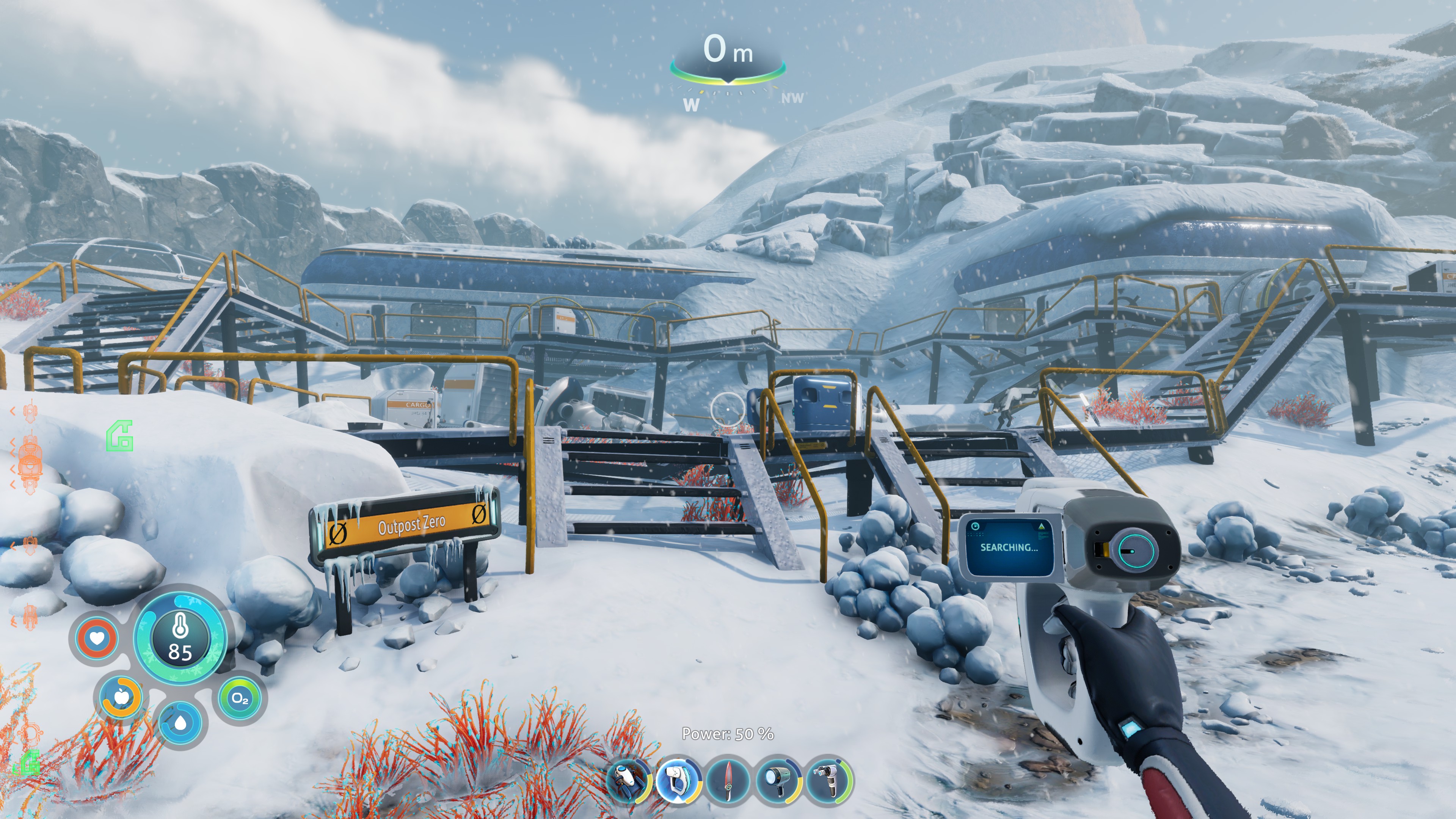 Below Zero’s story is more present and fleshed out than that of Subnautica. You play an entirely new character named Robin Ayou, who is searching for her sister Sam. Sam was a researcher on an expedition to 4546B’s Arctic region, and according to her employer Alterra, was killed in an accident. But Robin has cause to believe otherwise, and sets out to discover the truth.

The production values are considerably higher than in Subnautica. Robin is one of several fully-voiced characters, and unlike Subnautica you’re not physically alone in the Arctic region. The story is also much more focussed on relationships. You learn about Robin’s fractious familial bonds with Sam, as well as the various friendships and rivalries between Sam’s colleagues and other people who have visited 4546B’s Arctic.

Sadly, these added production values don’t add up to a better story. Neither Robin nor Sam are particularly interesting characters. In fact, most of Sam’s personality, which appears in the form of audio-logs, seems to be that she owns a cat. Meanwhile, the mystery of Below Zero isn’t quite as compelling as the previous game. Partly this is because it’s building upon established foundations, but it’s also due to a greater emphasis on explaining events to you, rather than letting you discover them yourself. It’s still a good story, more than enough to keep you engaged. It’s just not quite as fresh or exciting as that of Subnautica.