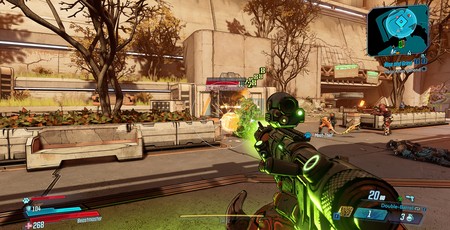 It’s time to get this off my chest. I had shared-world shooters. I hate them. Destiny, Borderlands, The Division. All of them can climb into the bin as far as I’m concerned. It isn’t the fact that they involve playing with other people, that I actually quite like, so long as they’re not FROM THE INTERNET. Nor is it the fact that they’re generally way too big for me to properly invest in. No, what really bugs me about shared-world shooters is that, when you shoot an enemy, numbers fall out of them. This probably seems like an extremely petty gripe. In fact, there’s no “probably” about it. In the grand scheme of things, it is absolutely that. But it isn’t simply an issue of personal taste. There’s a whole strata of reasons why this particular gimmick adopted from RPGs drives me around the twist, and how it’s a symptom of a more fundamental issue at the heart of shared-world shooters.

I’ve been a fan of FPS’ ever since I snuck into my dad’s home office while he left Doom running, scaring myself witless after turning a corner and running straight into the Cyberdemon (I was six years old). Precisely why I like them is complicated, but one of the simplest elements of it is simply that I like to virtually break stuff. Barrels that explode, enemies that burst into glistening giblet; I can’t deny that it tickles the white and scaly belly of my happy little lizard brain. Yes, I like clever level design and fast-paced movement and a well-told story and yadayada, but there are few things in gaming as instinctively satisfying as blasting a rocket at an imp in Doom and watching its ribcage crack open like a new book. 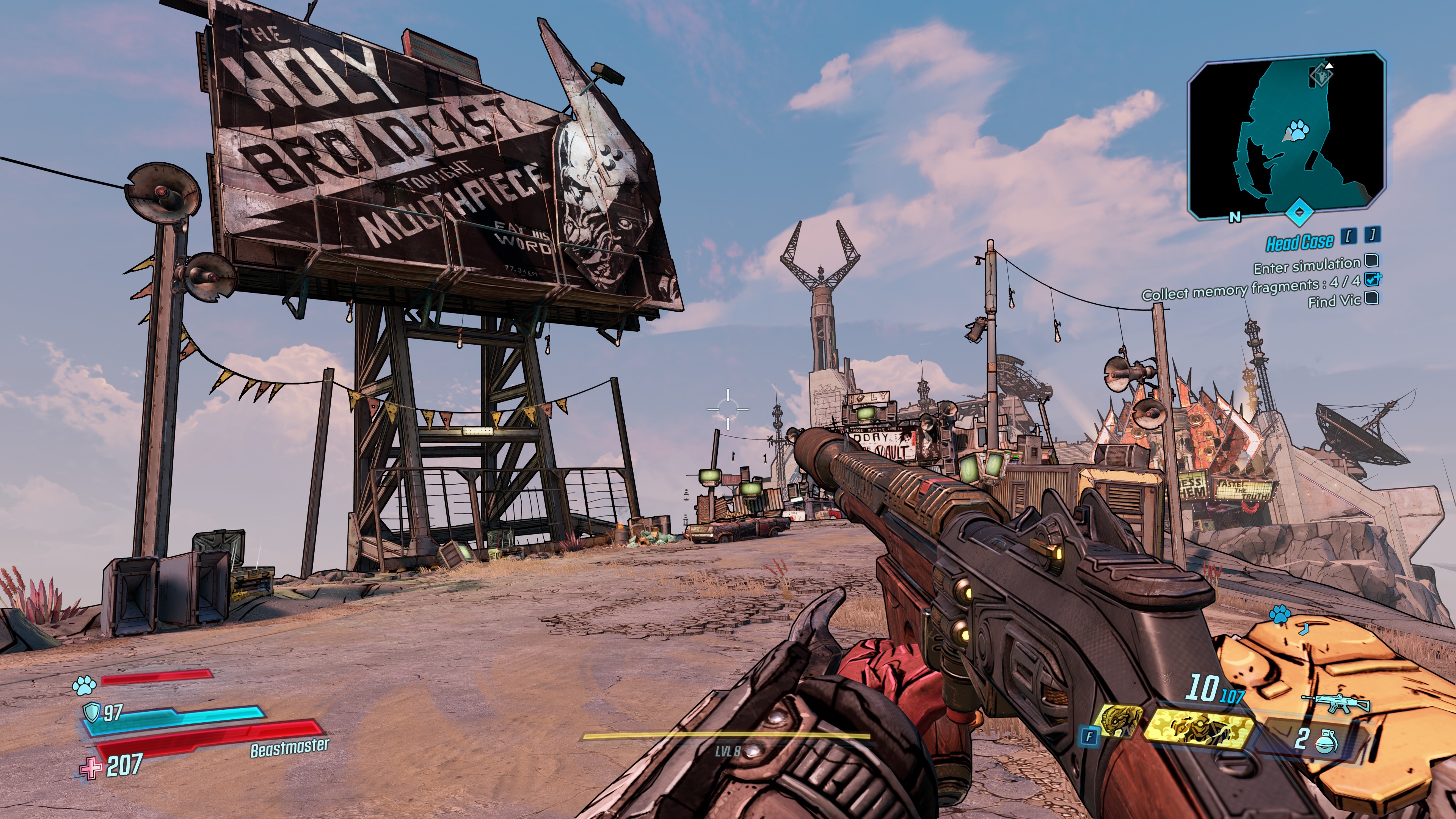 The enjoyment here isn’t simply an affection for gore and gristle, however. It’s also about the player affecting a virtual environment and the world within it. There’s a reason why guns are so prevalent in games, and it’s isn’t simply because games love violence. Guns are the most direct and efficient way to interact with a virtual environment, letting players instantly connect with and change a game space at any distance. Not only can they be used to shoot enemies, they can be used to blow a hole in the wall, to press a button, to collect a distant object.

Shooters are all about maximising this kind of interactivity. Your weapon is your brush, your environment the canvas, and your enemies the paint. Generally speaking, the more nuanced those interactions are, the more satisfying the game is. A rocket launcher that blows holes in the environment is more enjoyable than one that doesn’t, because it gives you further agency in the game world. Similarly, the nuance with which weapon damage enemies adds to that satisfaction. An electrical weapon that simply makes enemies fall over isn’t much fun. But one that makes their ragdoll flip out like a startled spider is both hilarious and gratifying. 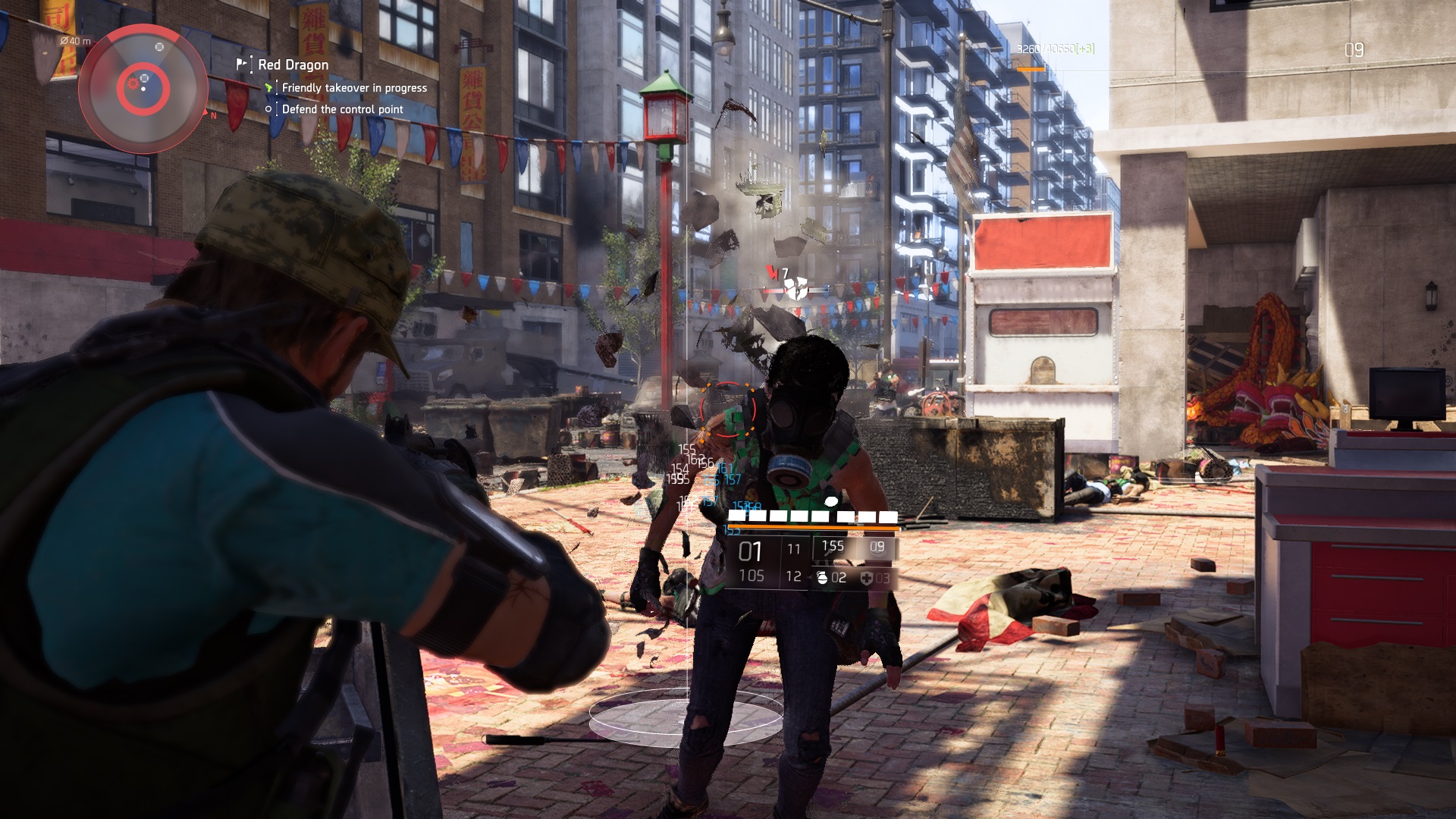 Ultimately, shooters are played with your gut. They’re reactive, organic games, all about responding in the moment to a constantly-evolving situation. The problem with shared-world-shooters is that they remove much of this agency by switching out this more organic form of representing damage and change, in favour of cold mathematics. Watching numbers fall out of the enemies you fight is the least satisfying way of portraying this interaction. It’s like a tennis player trying to perfect their serve by cracking open a maths book in the middle of a match.

In fact, it’s worse than that. Basing your shooter’s damage representation on raw, exposed maths flattens the experience. It explicates the fact that your weapons all function in the same way, and rather than offering a new way to fight, all a new weapon does is adjust the numbers that pop out of the enemy you’re fighting. It also often results in the spinoff problem of forcing game designer to turn enemies into unyielding bullet-sponges, where you’re simply trying to shave down their health bar as efficiently as possible until they eventually keel over. 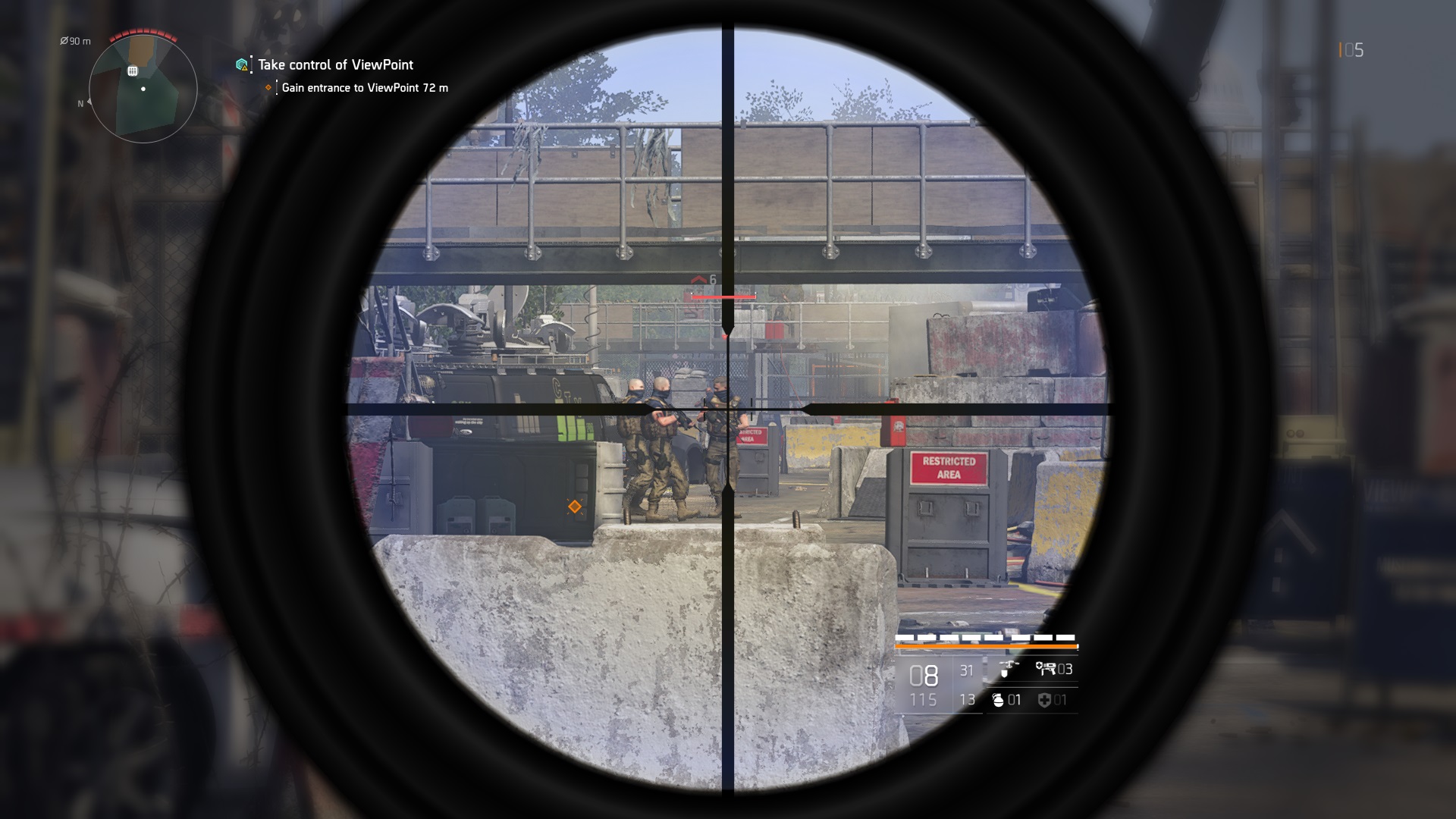 All of this feeds into the main issue I have with shared-world shooters, which is that they are interactively sterile. BioWare’s Anthem was especially problematic for this, reducing every combat encounter to the exact same feedback loop of shooting an enemy for a bit, deploying an ability, then shooting them some more. But they all suffer from this to a certain degree. Shared-world shooters have a lot in common with the amusement park design of mid-2000s MMOs. They might be awesome to look and a great place to meet up with friends, but they offer little in the way of agency. You can’t make any meaningful progress or change in them. It’s merely a conveyor belt of attractions designed with the ultimate aim of getting you to buy something at the gift shop.

This shift isn’t just less interesting for players, it’s also psychologically insidious. It switches the emphasis of the game from enjoyment of the interactions between your weapons and your opponents, to the acquisition of better loot so that you can pump up those numbers ever higher. Whereas I might choose to play Doom Eternal again because I enjoyed the experience it provided, the incremental rewards of games like Destiny and The Division are intended to monopolise your attention for as long as possible. They’re Skinner Boxes. You push a button and get a treat. Then you push a different button and get another treat. 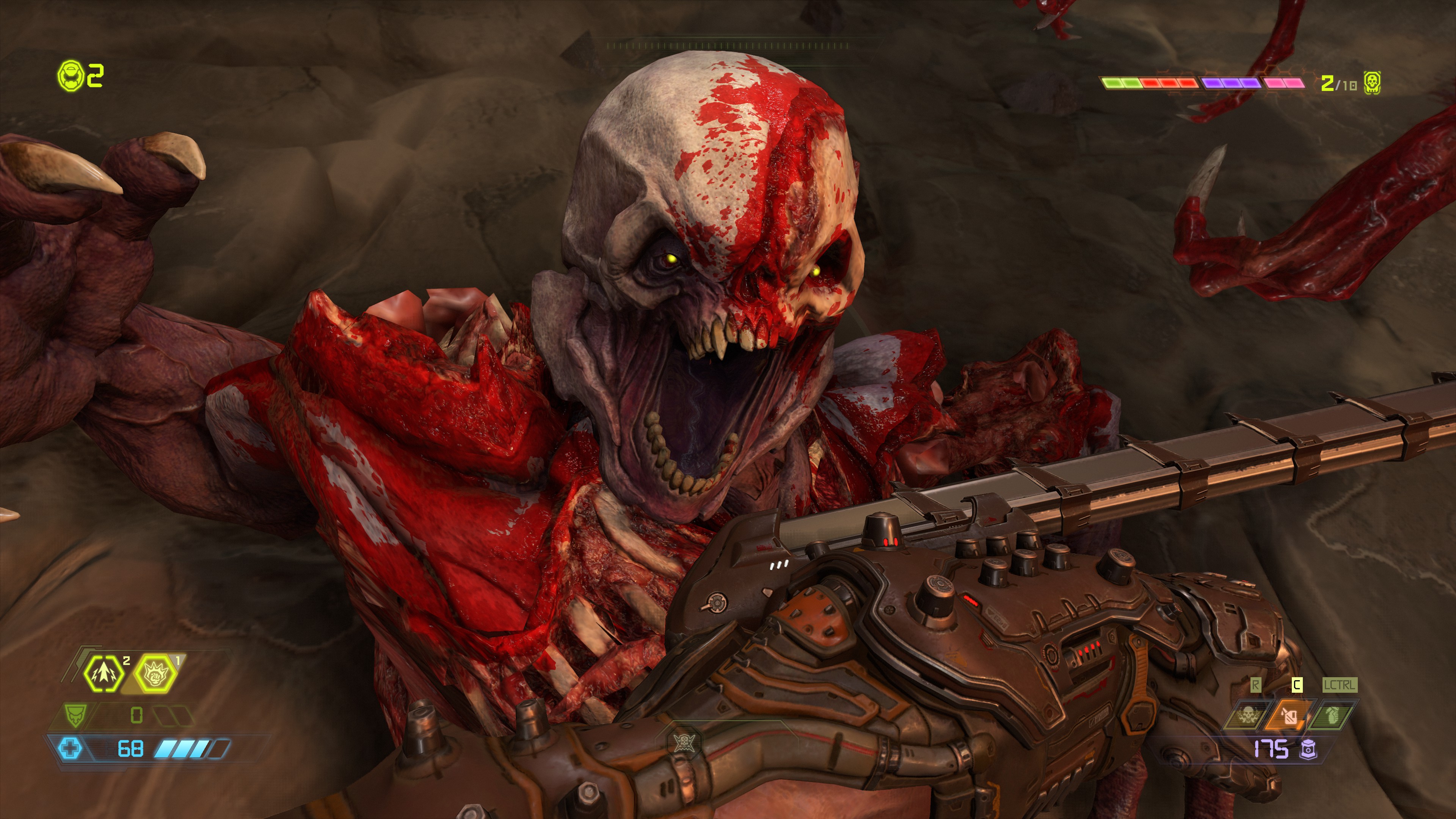 I’m not saying that I want all shooters to be gratuitous displays of hyper-realistic violence (if anything, I want the violence to be unrealistic, the more ridiculous the better). What I want is for games to be about interaction not acquisition, to be about experiences rather than XP. Games should be about what they let players see and do, not how much they can have. Reducing those experiences to their underlying numerical value reduces us to the status of machines that can exist to be exploited for profit. Whether or not this is done deliberately or accidentally, it’s an ugly reflection of how these games perceive the people playing them.