Portal Reloaded is the game Portal 2 should have been 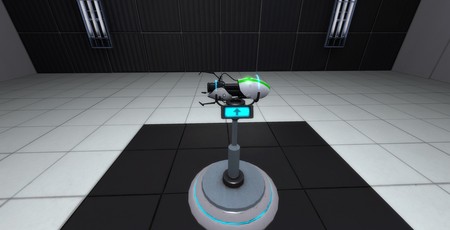 A couple of months back, I slathered my love for Portal 2 all over bit-tech. I waxed lyrical how it’s possibly the best comedy game ever made, how cleverly it introduces new elements to Portal’s spatial conundrums, and how wonderfully it expands upon Aperture Science as a place. It is as good a sequel as you could possibly hope for to one of the most original and ingenious games ever made. 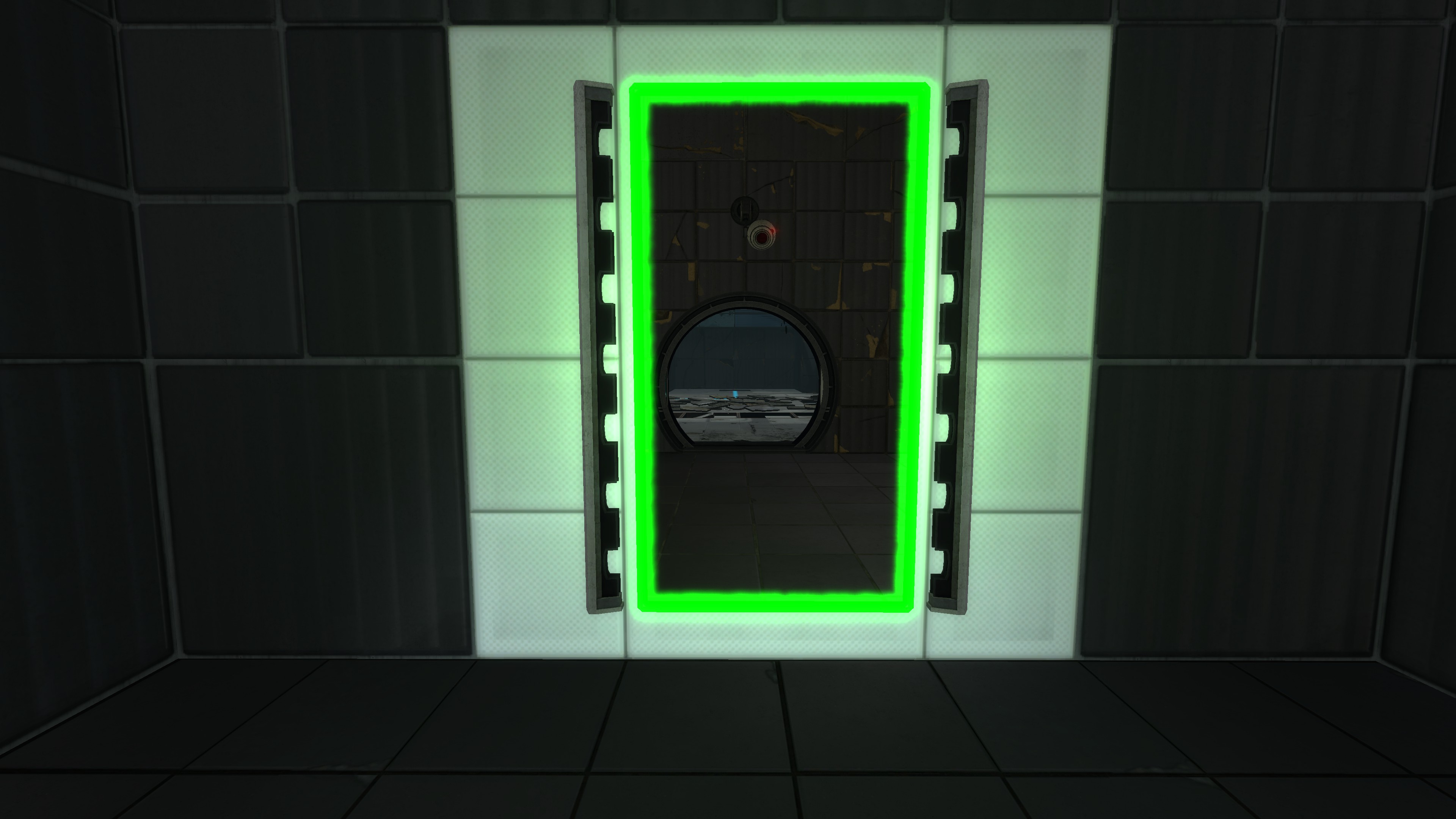 At least, that’s what I thought.

While I genuinely believe Portal 2 is a fantastic game, my one criticism of it is that it doesn’t bring anything fundamentally new to Portal’s puzzling concept. Sure, it adds extra puzzle elements like lasers, light-bridges, and various environment-affecting fluids. But these are fairly minor iterations upon the same concept. They don’t have that same “wow” factor you get when you walk through one of Portal’s portals for the first time, gasping as you instantaneously transition from one point in space to another. 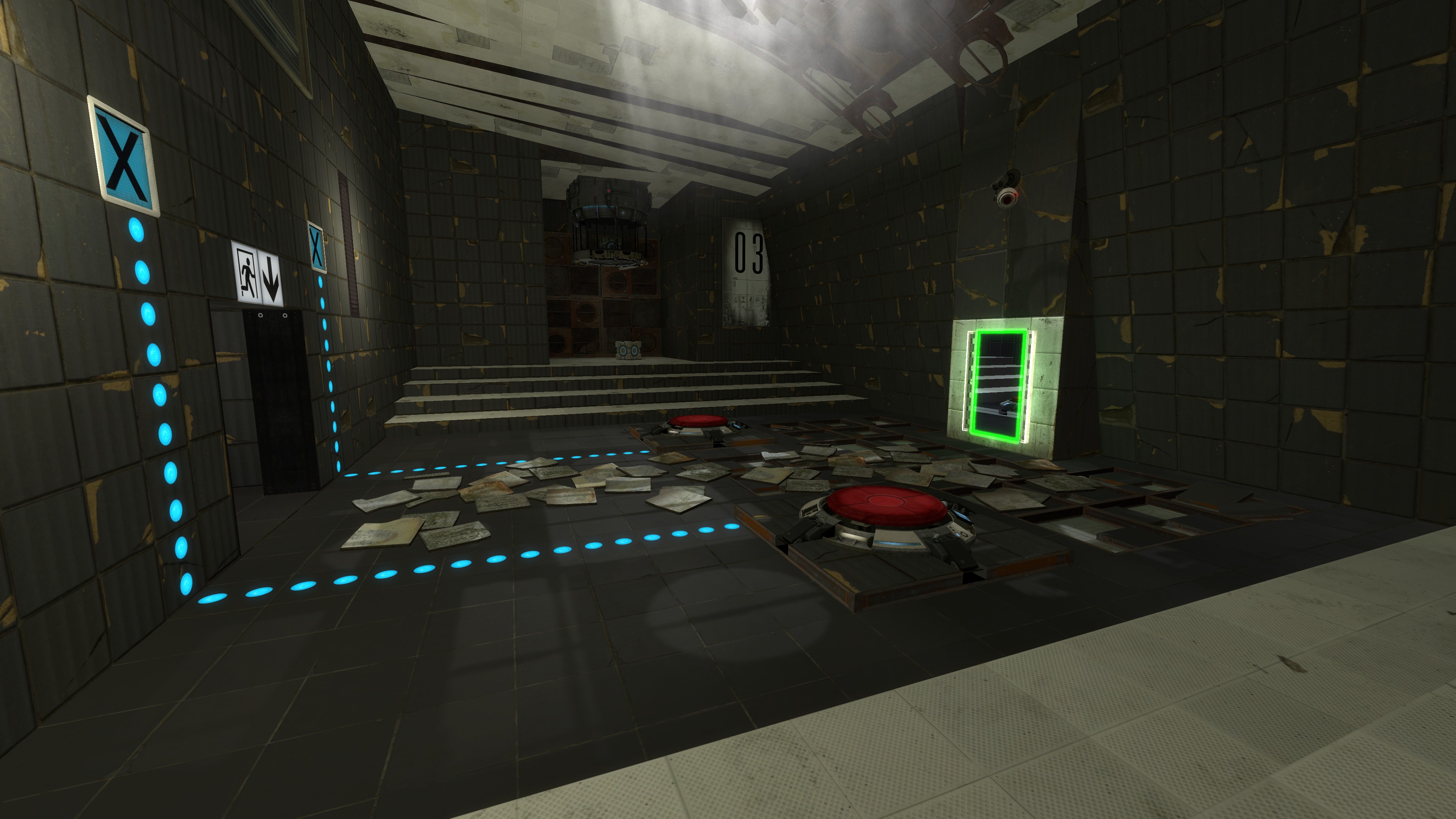 But I also thought this wasn’t a fair criticism of Portal 2, because I didn’t believe it possible to rekindle that moment of astonishment. Then I played Portal Reloaded, which has made me fall in love with Portal’s puzzling in a whole new way, and made me realised that Valve barely scratched the surface of Portal’s puzzling potential.

Portal Reload is a standalone Portal campaign. Taking place within the cavernous confines of Aperture Science, it features the same test-chamber structure and wry, lightly sadistic humour of the two official games. But it makes one major addition to Portal’s mechanics, adding a third portal you can place in the world. 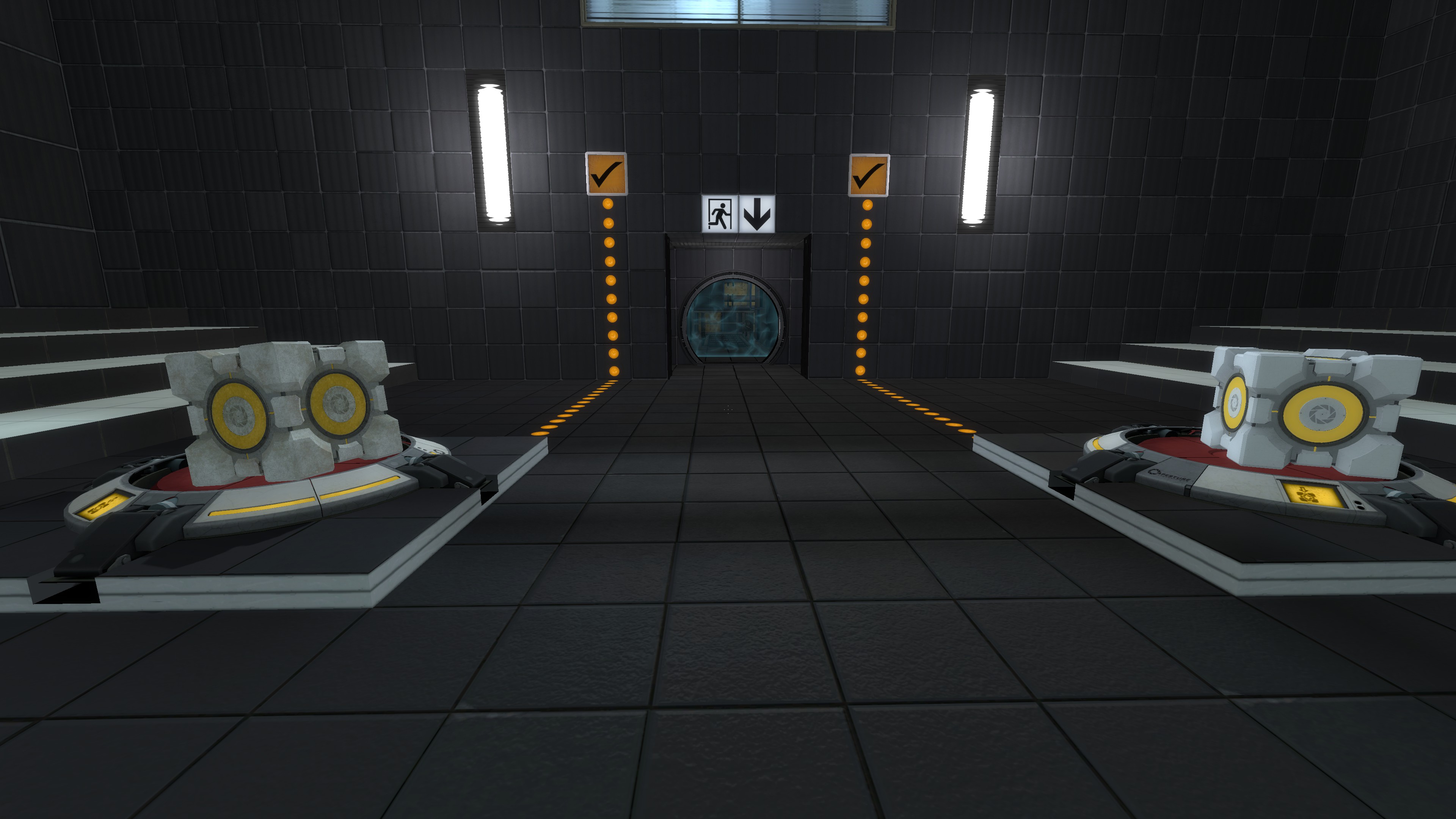 This Portal works differently from the blue and orange portals already featured in the game. Whereas those portals are for moving instantly through space, this new, green portal lets you step seamlessly through time. Specifically, it lets you travel between the present and future versions of the exact same space, with a twenty-year gap between them. Present Aperture Science is all clean and gleaming and new, while future Aperture Science is dirty and crumbling and overgrown.

Taken on its own, this effect is cool, but not that impressive. What you’re essentially doing is moving between two mirror images of the same puzzle chamber, one sparkling fresh, the other old and dilapidated. It’s how Portal Reloaded uses this premise to create conundrums that makes it possibly the most brilliant puzzle game I’ve played in the last few years. 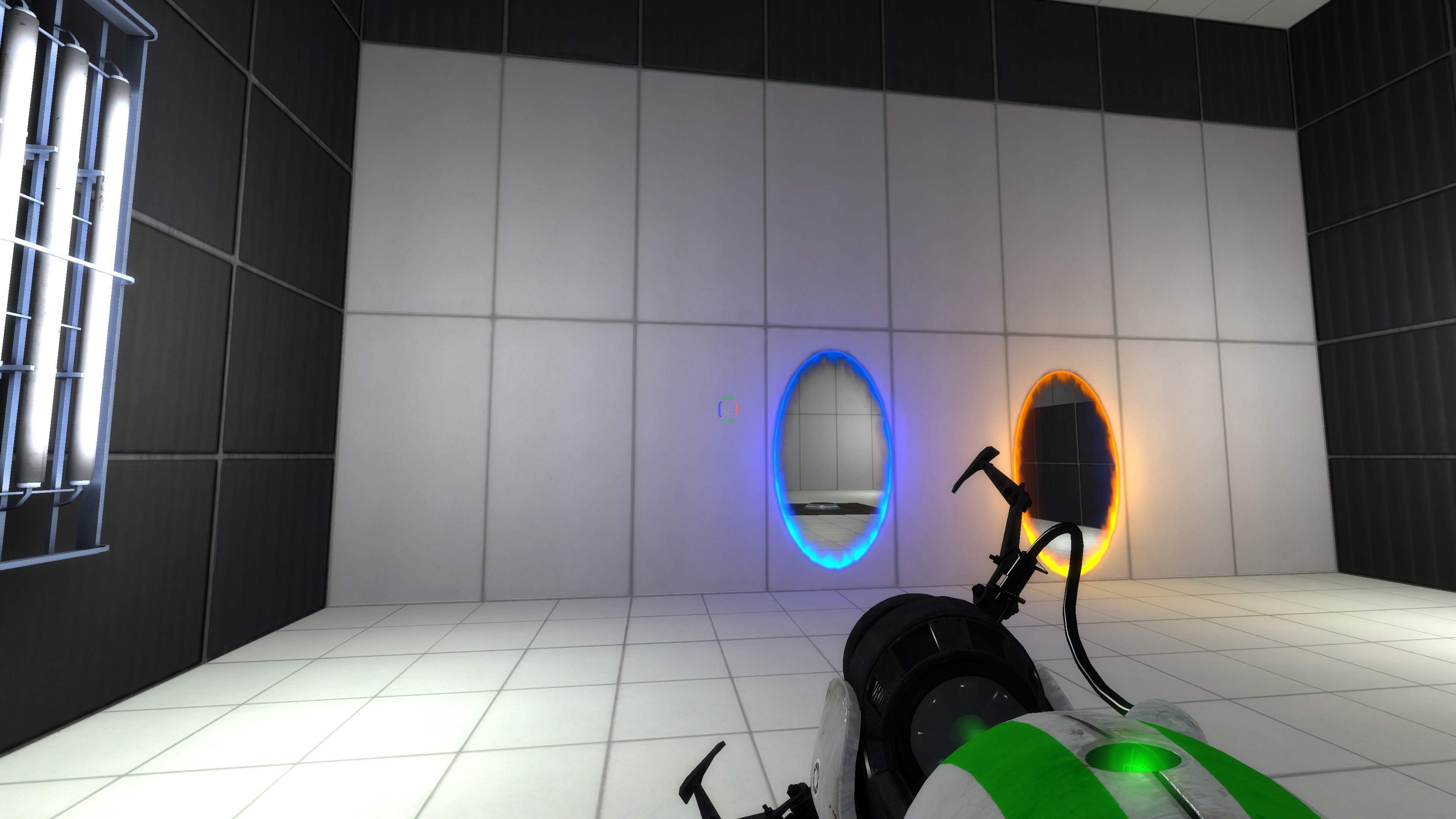 Portal Reloaded’s puzzling is defined by two key rules. The first is that if you move an object in the present, that movement will by mirrored in the future. If you move an object in the future, however, its present equivalent will not be affected. The second rule is that present objects cannot be taken into the future, as this violates the laws of causality. Future object, however, can be brought back into the present.

Reloaded uses this concept to create some truly brain-frazzling puzzles. To give a very simple example from the game itself [MINOR SPOILERS FOLLOW IN THIS PARAGRAPH], one puzzle requires you to place a cube on a button to bring down an elevator, then place a cube at on a button at the top of the elevator to open a door. Solving this puzzle requires you to place the present cube in a position where you can reach it from the elevator, then take the future cube, bring it through the portal, and place it on the present button. At this point, you must move to stand on the elevator, then pick up the present cube. This causes the future cube to instantly move from the button in the present, to the position in the future where you moved the present cube to. This enables the lift to go back up, and for you to complete the puzzle. 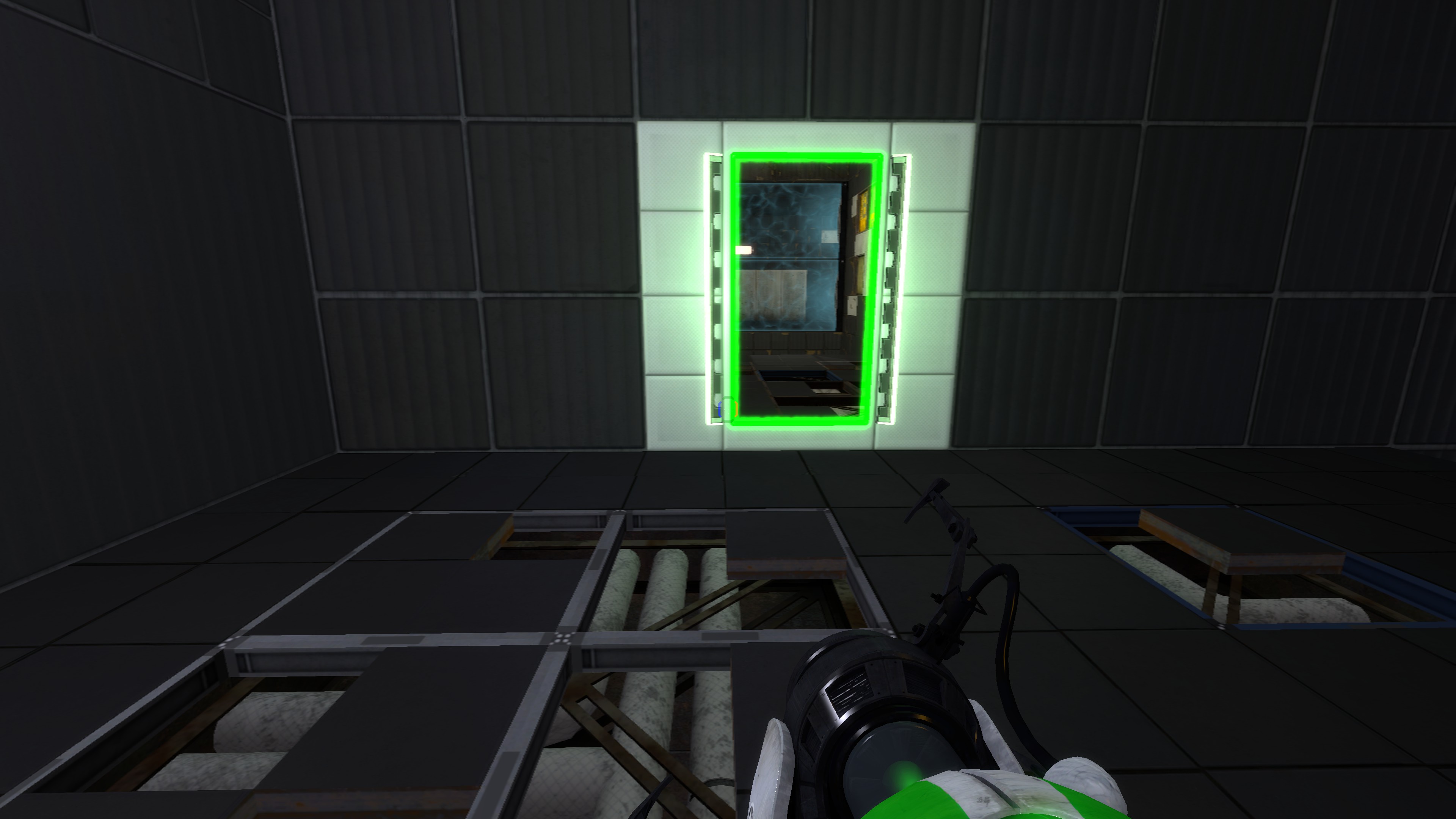 If that description has turned your brain into jelly, remember that this is a simple example of Portal Reloaded’s puzzles. Later puzzles greatly increase the complexity, letting you place time portals yourself, and introducing concepts like using time portals to propel yourself over gaps. One of its slyest features is that the present and the future versions of the chambers do not always match precisely. Windows in the present may be shattered in the future, while missing floors in the future may be intact in the present. These differences open up new pathways that are both an additional headache and a gentle nudge toward the solution in the puzzle.

Playing Portal Reloaded, you can feel your own mind trying to wrap itself around the concept of thinking in four dimensions, the nuances of cause and effect, how the present and the future relate. It’s simply brilliant, to the point where I find myself wishing that Portal 2 had this concept, that I could go back in time and insert the mechanic into Valve’s sequel. It’s almost weird how close Valve skirted toward the idea themselves. Portal 2 is fundamentally built upon the premise of seeing Aperture Science in multiple time slices, the analogue past and the destroyed future. It edges so close to Portal Reloaded’s revelation that I struggle to believe Valve missed it. 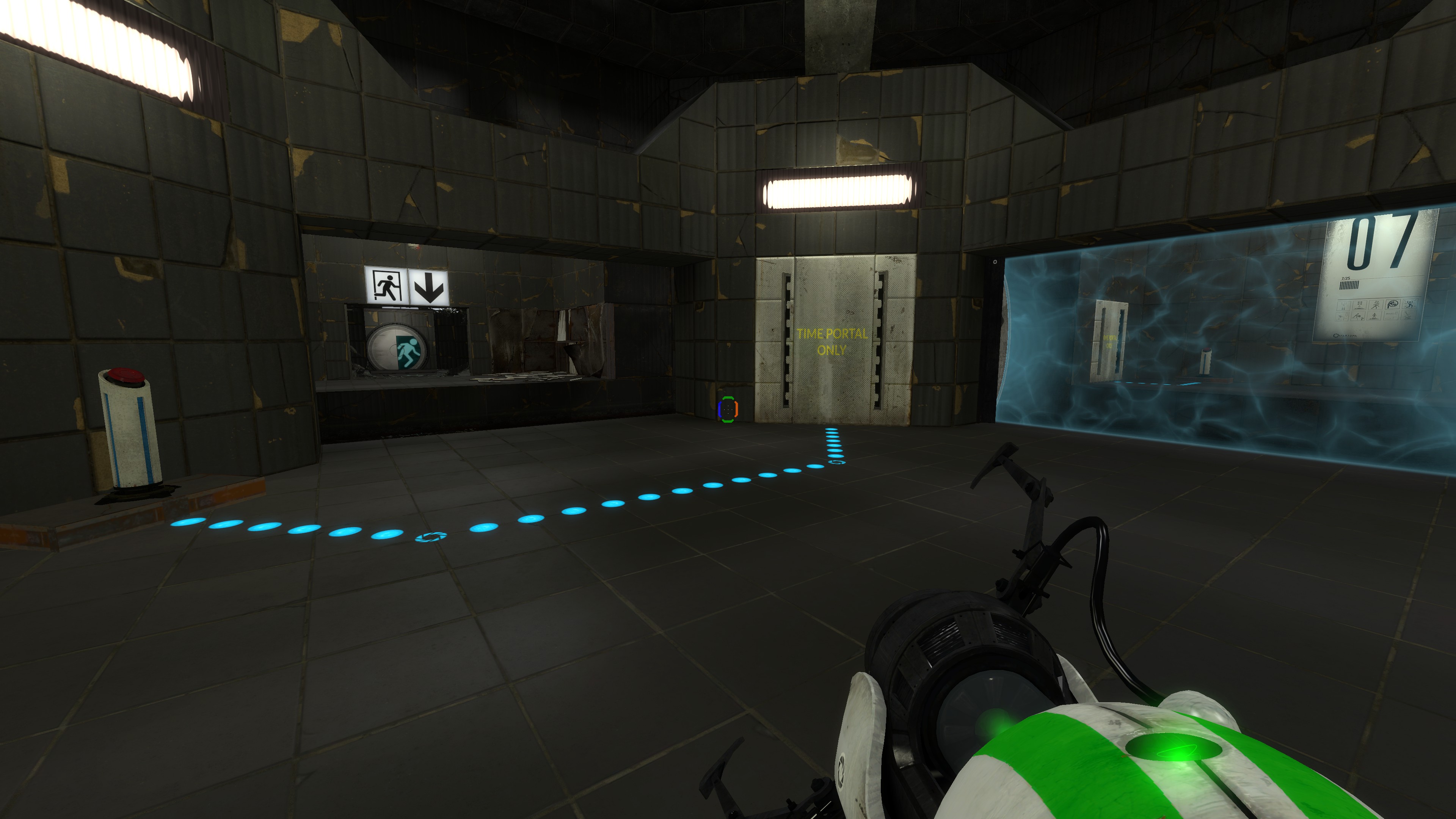 It’s also worth noting that, beyond its phenomenal concept, Portal Reloaded is a well-made game otherwise. The little story it weaves is interesting, and it successfully mimics Portal’s own brand of humour, albeit without the voice acting talent of Stephen Merchant and Ellen McClain. The only real complaint I have about it is that it’s very short. Then again, the original Portal was also a fleeting affair, and Portal Reloaded is completely free, so it would take the most curmudgeonly soul to criticise it for that.

Anyway, if you’re even slightly interested in Portal, you must absolutely play Portal Reloaded. It’s the closest thing to Portal 3 that we’re ever likely to get, a mod that splendidly innovates on Portal’s premise, bringing something genuinely new to Valve beloved puzzling series.