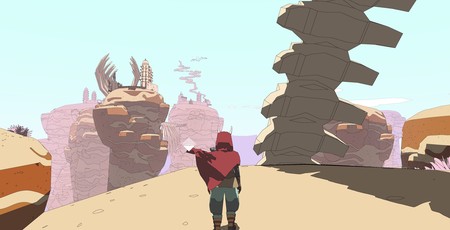 Cards on the table, I bounced off Sable harder than an airsoft ball off the side of a tank. Shedworks' placid exploration game is undeniably beautiful and demonstrates both talent and passion from its creators, but I found its mechanical design lacking and its general structure antithetical to my tastes. While I intermittently enjoyed pootling about its desert landscape, and there are undoubtedly moments of vision within its world, I also couldn't shake the sense that beneath the wonderful art is a game I've played a dozen times before. 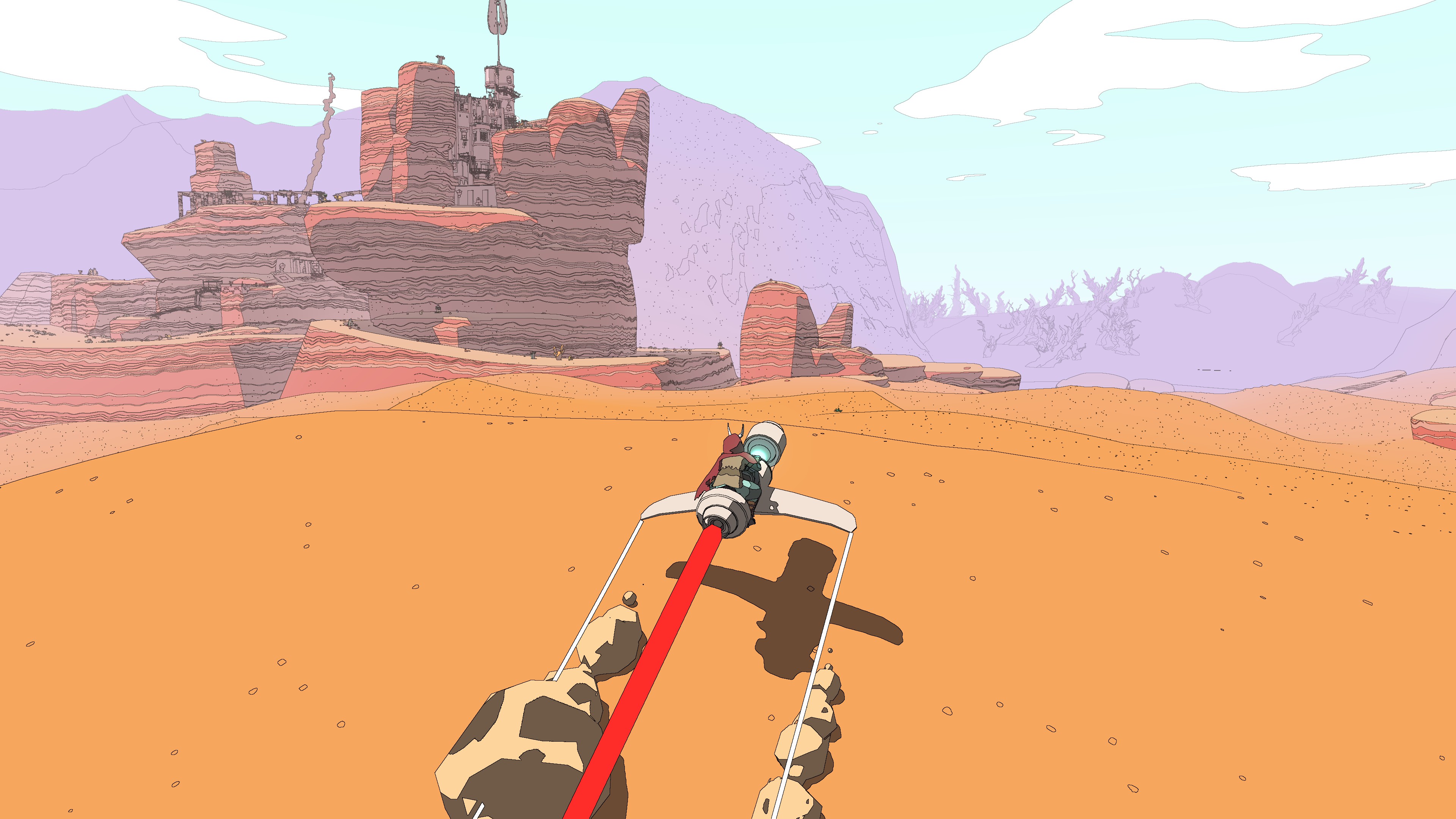 Sable is a nomadic coming-of-age story set on a stratified desert world, Dune if Paul Atreides has told the Bene Gesserit to swivel with all that destiny nonsense and gone on a particularly dusty gap year instead. You play a girl named Sable on the cusp of adulthood about to embark on her 'Gliding', a cultural rite of passage where she must travel the world alone in order to find her place within it.

The game begins with what is essentially a tutorial level closed off from the rest of the world, a tutorial level that frankly goes on a bit too long. It sees Sable running various errands on behalf of her clan as she prepares for her journey, gathering parts to assemble her glider, as well as collecting a few useful items such as a compass and an ability that slows her falls. 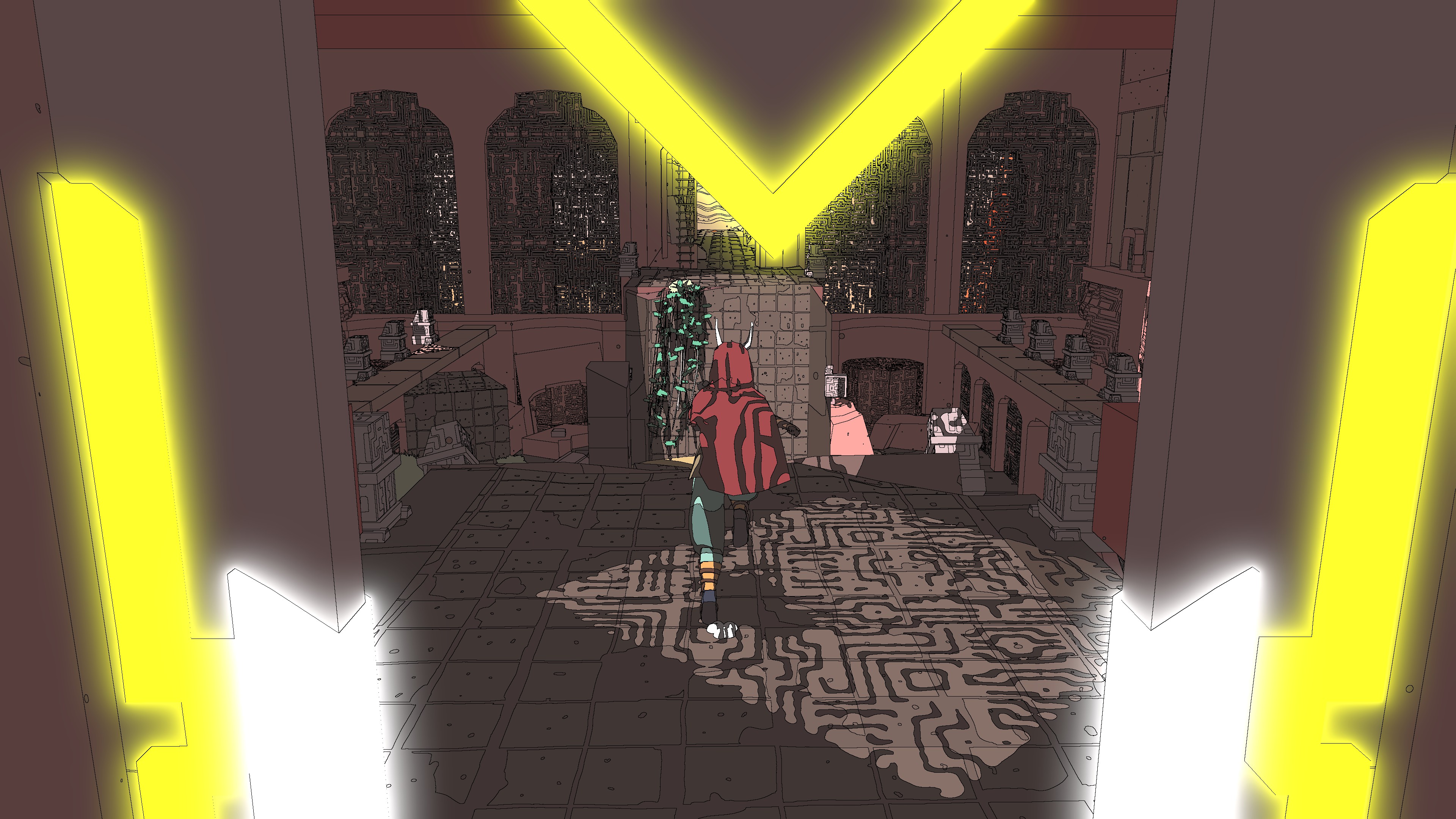 It takes about an hour to unveil what probably could have been explained in about ten minutes. That said, this section is less about teaching you the game's mechanics, and more about getting you acquainted with Sable's found family so that you feel they're absence when Sable departs. And this is effectively achieved, partly thanks to the game's characterful and considered writing, which just about avoids stumbling into the land of twee. For example, an annoying little girl who steals a bike part and sends you round the houses to get it back later reveals she was just upset at the prospect of Sable's departure.

In a way, this encapsulates Sable's design ethos. It's less about any mechanical sense of progression or achievement, and more about experiencing and enjoying the world for its own sake. Once you're released from the cradle of Sable's home valley, you're free to go wherever you want and do whatever you want. There's no level gating, no restricted areas, no artificial obstacles to exploration whatsoever. There are quests, and puzzles, and platforming challenges, but you don't have to engage with any of them if you don't want to. 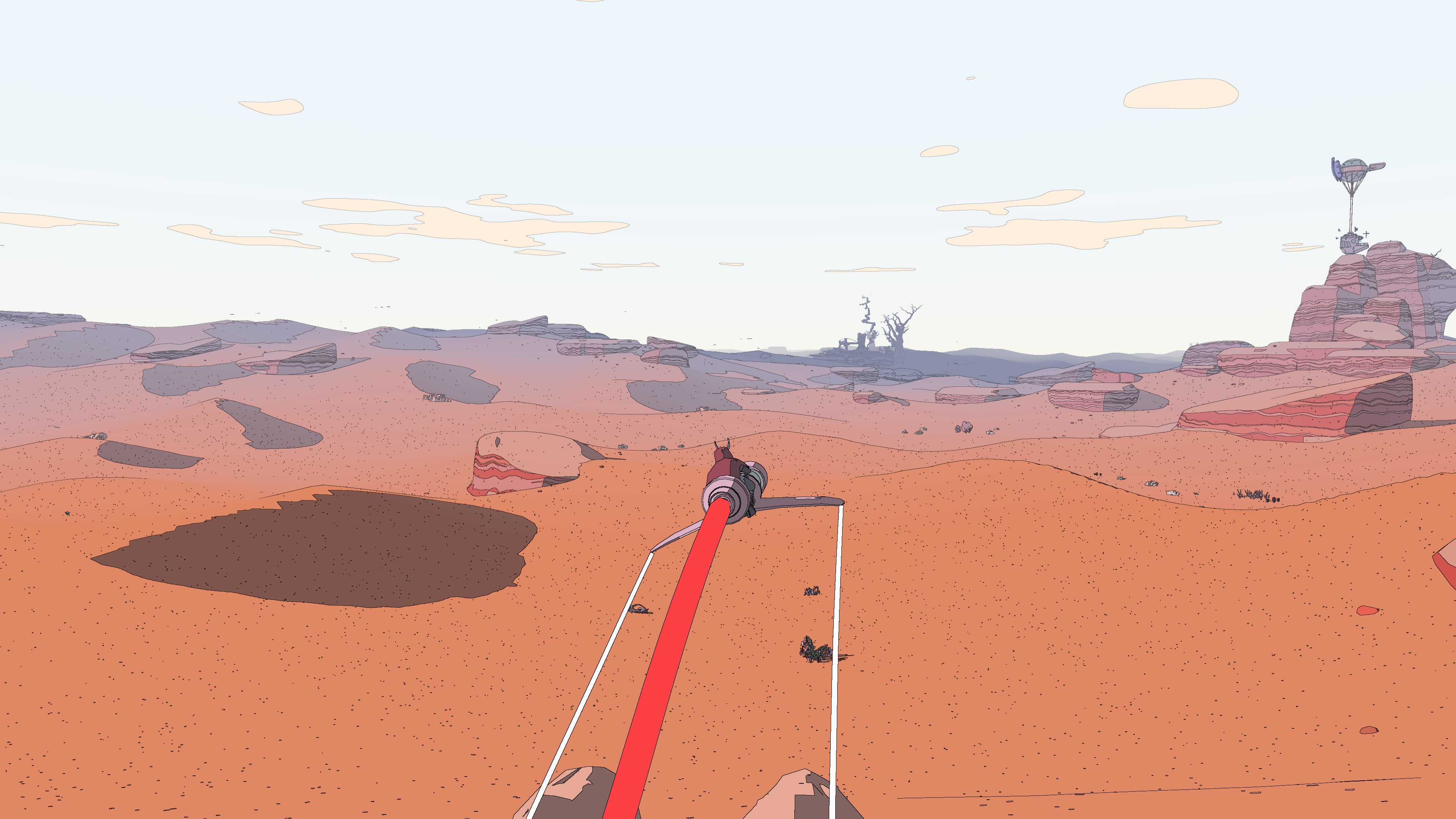 It's up to you to decide what kind of game you want Sable to be, which for me meant it was mostly a game about climbing. Sable employs a Breath of the Wild-style climbing system whereby almost every surface is climbable, but you have a limited amount of stamina with which to climb. I spent a lot of time scaling heights to seek out "cartographers", professional mapmakers who will supply you with maps of the area and a badge as a mark of achievement for finding them, as they tend only to be found in the most precipitous places in the desert.

But if you just want to go sightseeing, there are plenty of interesting sights to see, ranging from ramshackle settlements to ancient crashed spaceships to remote, monastic structures sat atop towering, teetering mesas. Each of these places has a snippet of story behind it, letting you piece together the jigsaw that is Sable's world history. And wherever you go in Sable's world, it is wonderfully atmospheric. The art is obviously stunning, particularly the way colour fades in an out of the picture as the sun rises and sets. But what impressed me more was the sound design. The way Sable's footsteps echo off cave walls is incredibly immersive. 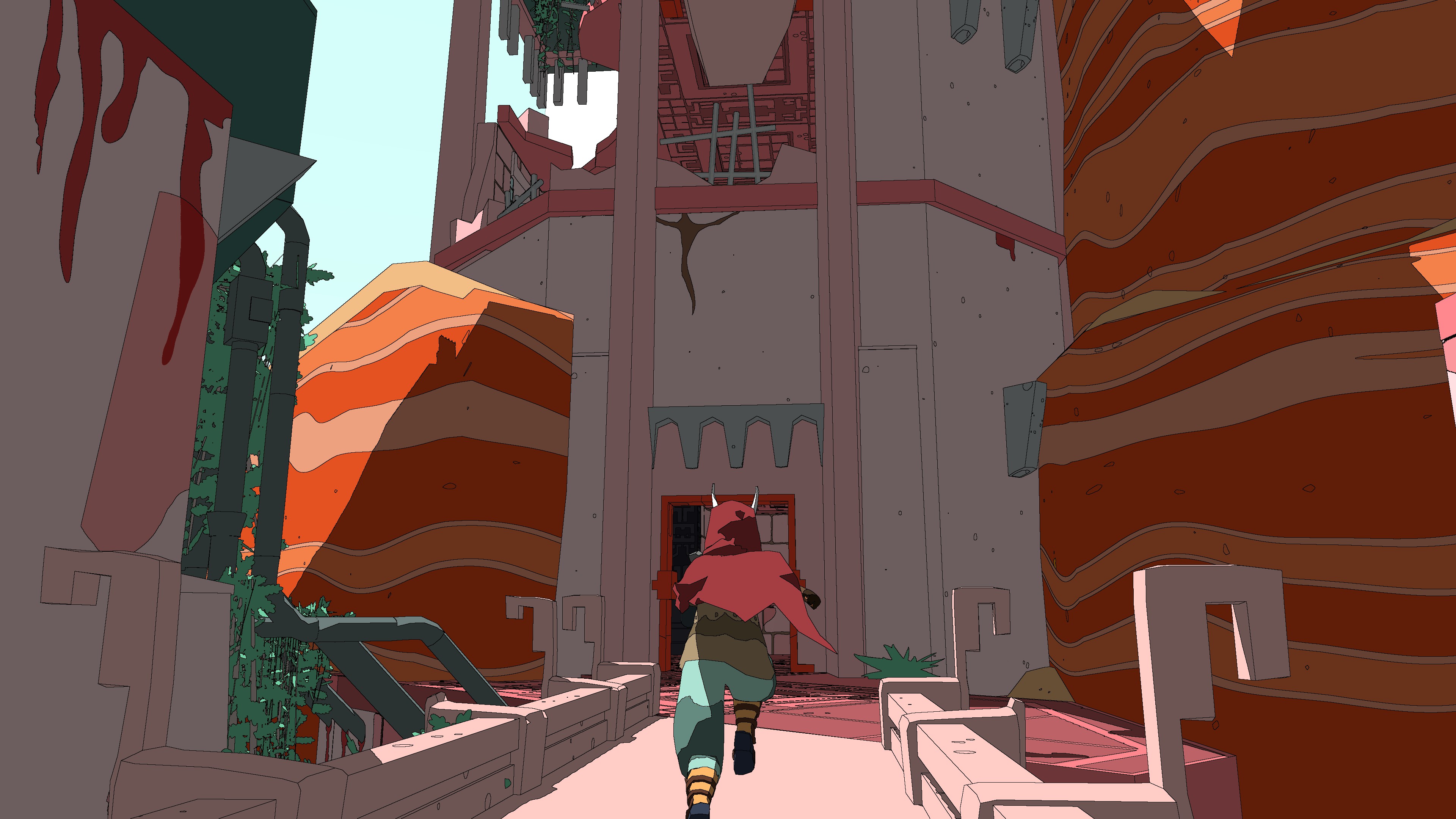 Unfortunately, Sable doesn't feel as good as it looks or sounds. I found her stuttering, anime-like running animation to be instantly disagreeable, completely at odds with the way the line-drawn landscape smoothly flows from one dune to the next. The glider, meanwhile, is either tedious or outright cumbersome to control. Most of the time you just point it in a direction and then pick your teeth until you arrive, except for moments when it randomly fails to navigate a sand dune and ends up rolling around like an excited puppy.

My biggest issue with Sable, however, is the lack of any dynamism to its world. The game features no especially unique systems, while the quests tend toward "collect three things" affairs, and the puzzles mostly revolve around standing on pressure plates or finding batteries to power sealed doors. There are exceptions, such as an intriguing detective mystery where you're chasing leads throughout town. But they are exceptions rather than the norm. 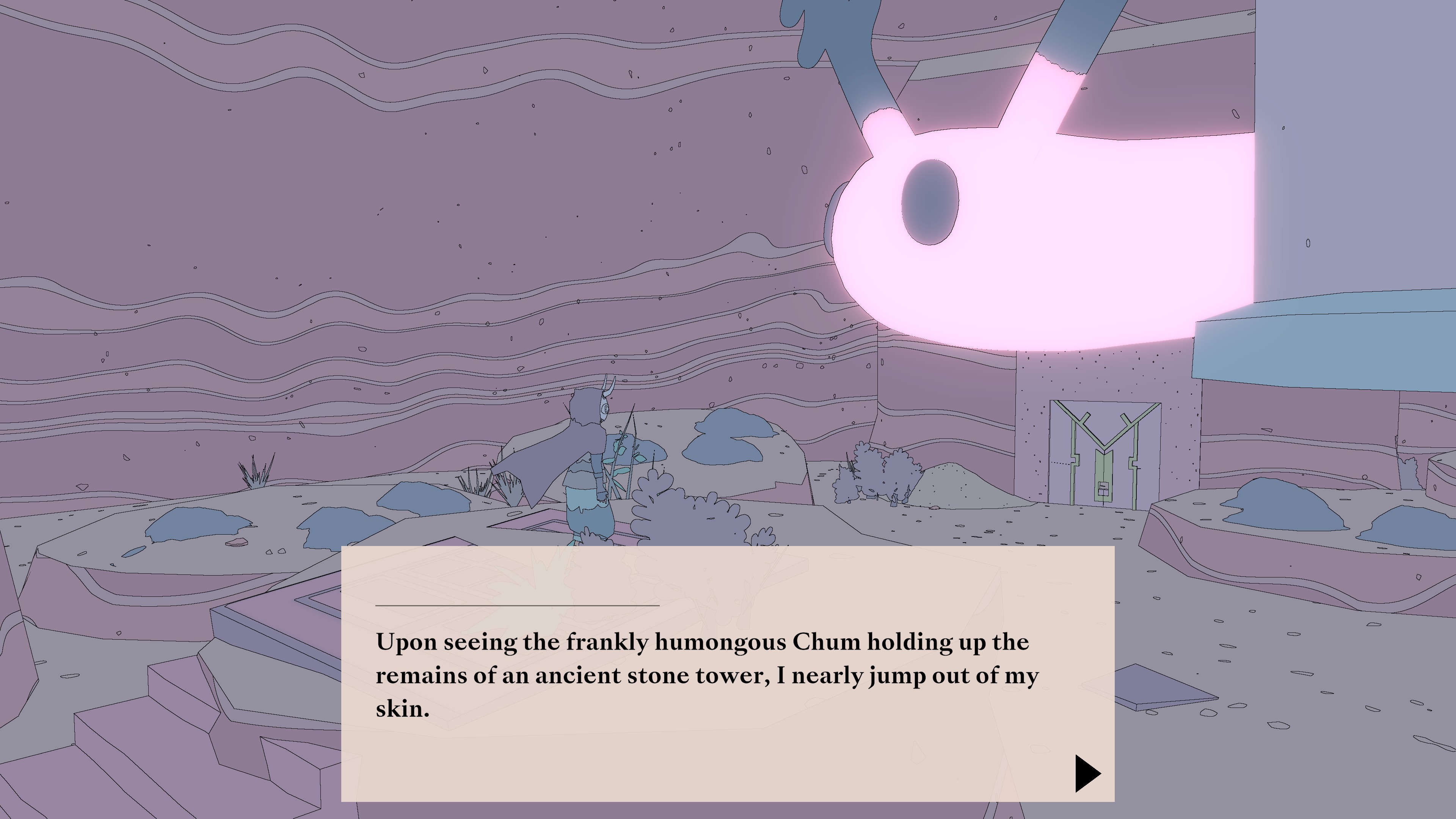 I get that Sable is supposed to be a more contemplative affair, but nearly every open world game features these moments, whether you're riding through the range in Red Dead Redemption 2, or standing beneath a ruined suspension bridge in Mad Max. The sublime and the beautiful are fundamental design components. Even Days Gone has moments like this (as well as a better bike).

Perhaps I'm jaded because I've played so many open world games, or perhaps I'm too sandbox oriented to appreciate Sable's more hands-off approach, but I really feel like it needs something to bind its world together, some universal system that gives it an identity beneath the fingers. What made Breath of the Wild a masterpiece wasn't the size of its world or its gorgeous art, it's the way you could interact with that world, how every tree and blade of grass was a springboard for creative play. 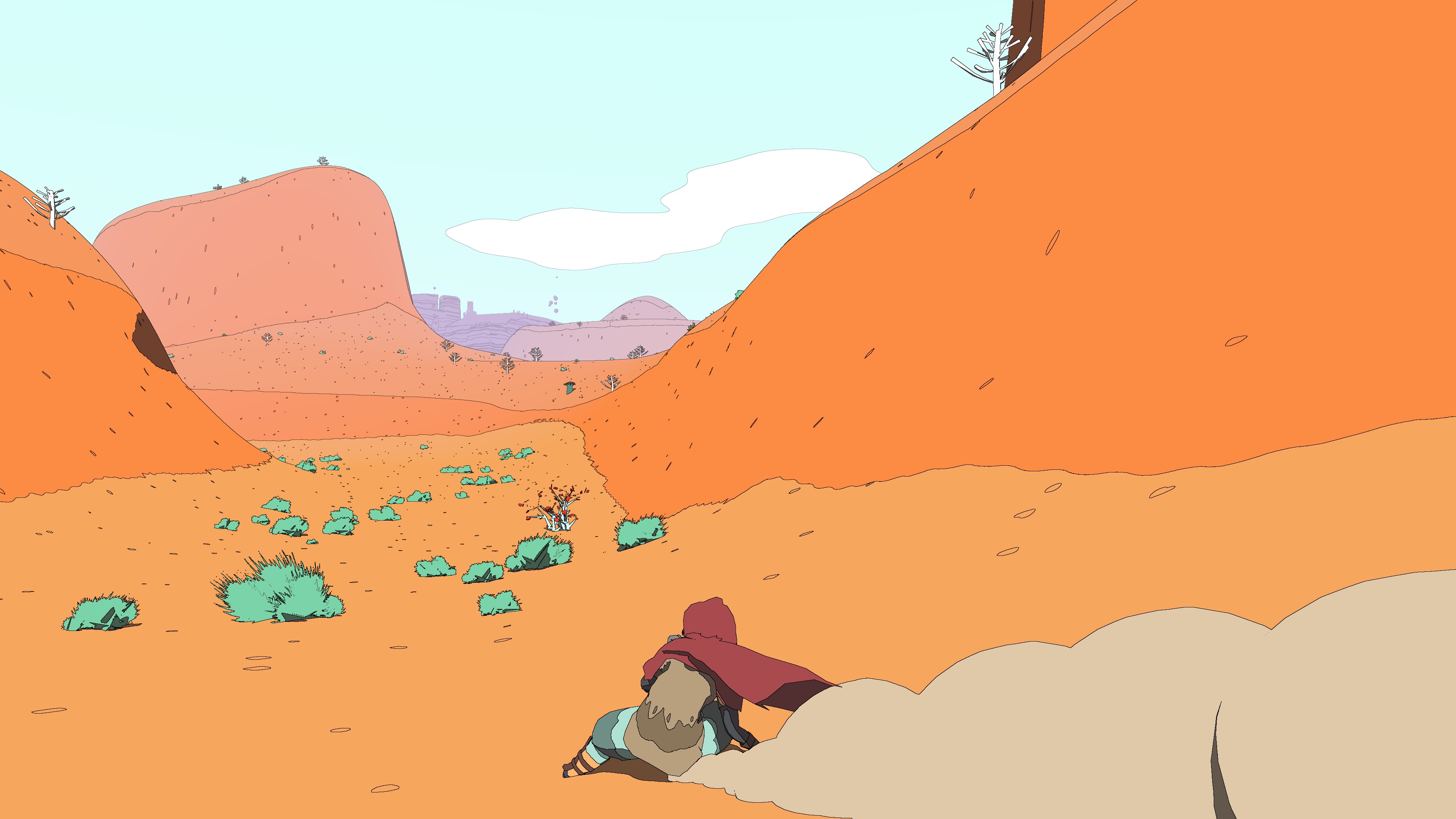 Sable takes most of that out, quite literally given its arid world. You can bike and you can climb and you can talk to people, and that's more or less it for your main interactions. I've been there and done that, and Sable's attempt to recontextualise it simply wasn't enough to get me on board. It's pretty, it's well written, and the soundtrack is gorgeous, but beyond that, Sable's desert adventure left me feeling more stranded than stunned.