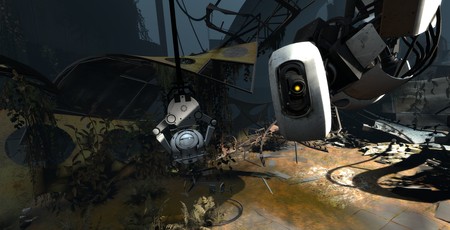 Portal didn’t need a sequel, it was said, because Portal is a perfect game. Certainly, few games exhibit such watertight design as Valve’s experimental puzzler, which stole the show of the Orange Box when it released in 2007. It had an innovative concept, puzzles that bent both space and your mind, a story that punched far above its weight, and a witty script that introduced one of gaming’s most iconic baddies. It even ended on a song. 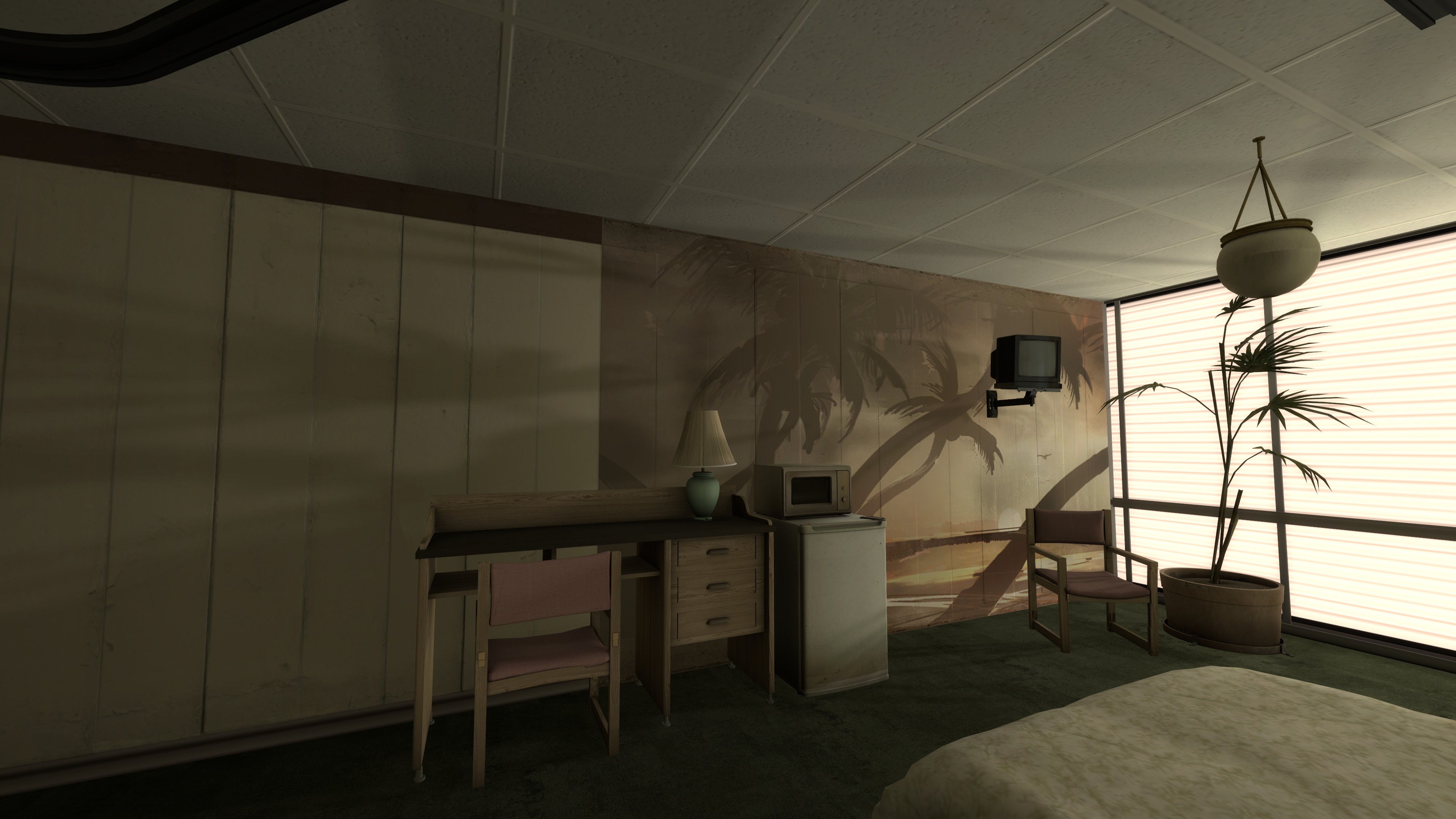 Making a sequel to Portal, it seemed, was like making a sequel to cake. Cake is fine as it is. There’s no reason to mess with it. But Alien is a perfect horror film and doesn’t need a sequel. And yet it got one anyway, which also turned out to be one of the best films ever made. Sequels stand or fall on their own merit, and if there’s any developer that can make a sequel to a game that doesn’t need one, it’s Valve. The studio did it with Half-Life. It did it with Team Fortress. It did it with Left4Dead (which everyone thought was a terrible idea before they played it). Why the hell wouldn’t Valve do it with Portal?

I’ve played both Portals a lot over the last couple of years, because my daughter loves them, and I’m confident in saying what I was too cowardly to say back in 2011, that the second game is better. The main reason Portal is deemed perfect is because it is short, making it seem a pristine little gem in a medium that so often prioritises bigness. I agree that Portal is close to flawless, a precisely packaged little box of a game. But the way Portal 2 unpacks that box without breaking the content makes it every bit as good as the game it’s based upon. 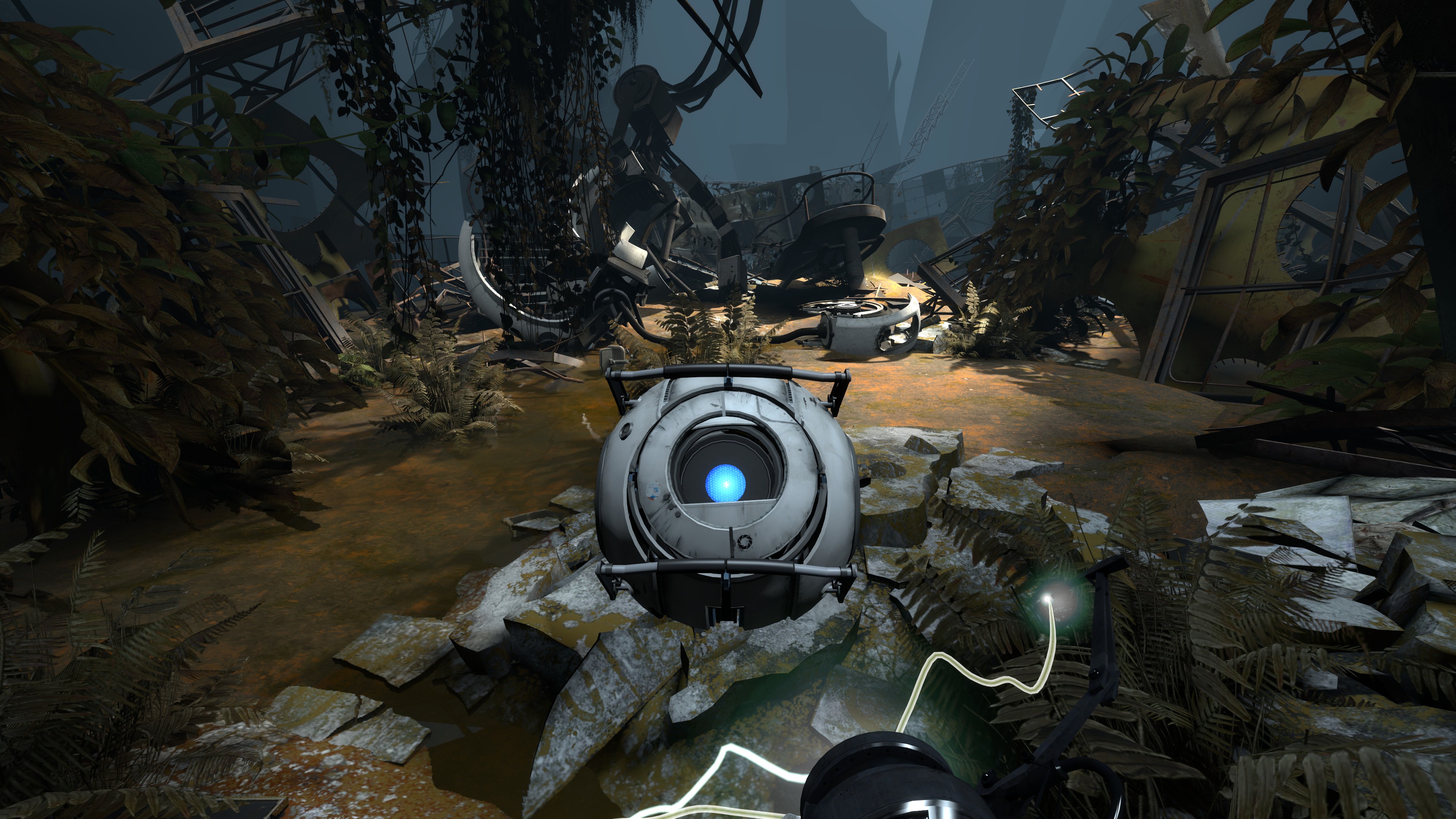 As a sequel, the biggest hurdle Portal 2 faces is that while it features the exact same mechanical magic as the first game, it can’t make you feel the way you did about it when you first connected two points in space with a gun that makes holes (not bullet holes, but, well, you’ll figure it out). Indeed, if Portal 2 has a flaw, it’s the inability to conjure a mechanic that’s equally good. The lasers and the light-bridges and the gels are all excellent contributors to Portal 2’s more advanced puzzling, but that’s all they do. They serve the puzzles. They are not a new physics-defying tool for the player to freely wield.

That said, criticising a game for failing to reinvent the wheel is pretty harsh. While Portal 2 can’t match the innovation of the original, it does find ways to improve upon some of its other features. The first of these is comedy. Portal is a funny game, but Portal 2 is possibly the funniest game ever made. 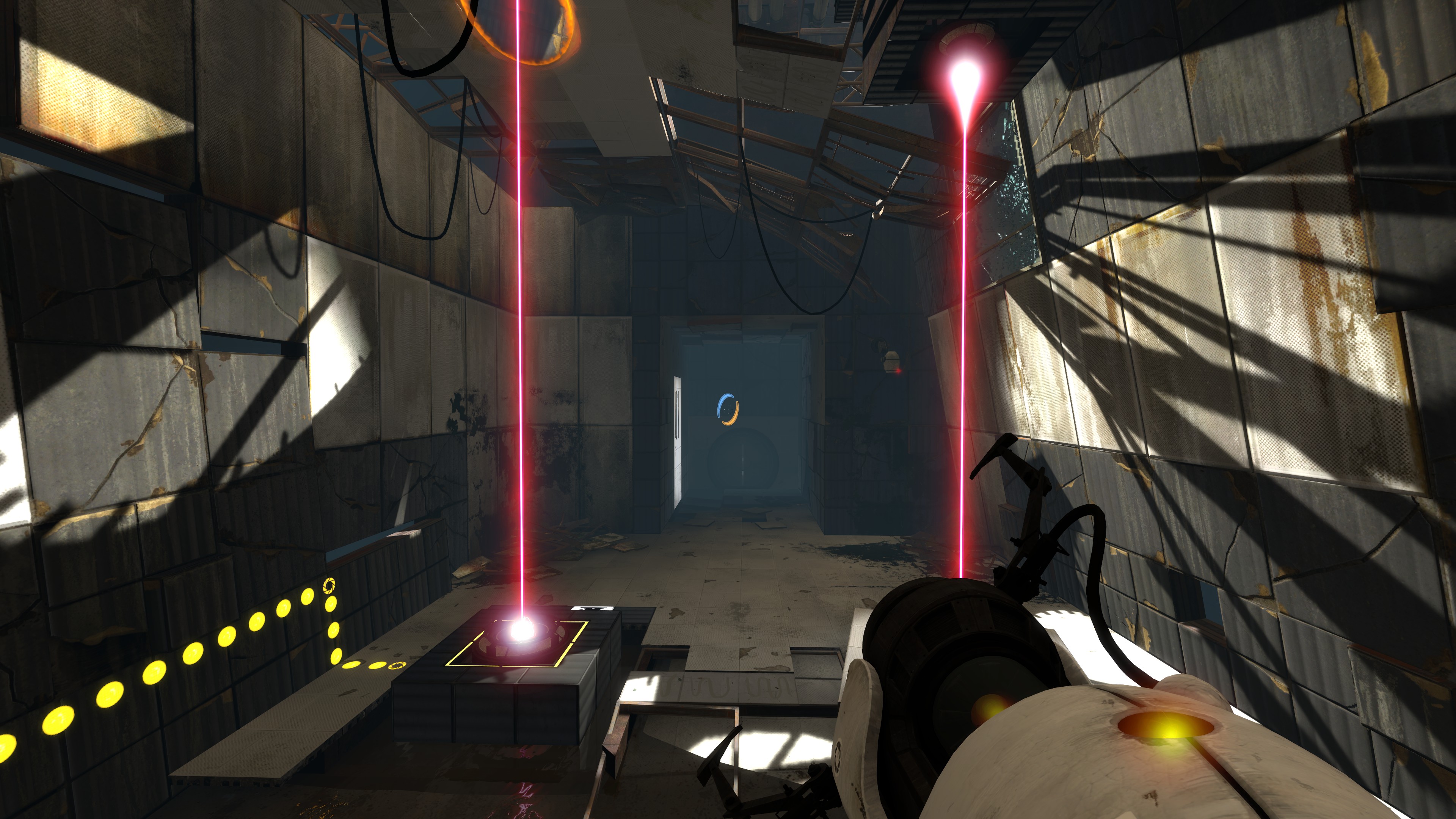 From the first scene, where Chell is awoken from enforced slumber to jump around a bit for “exercise” and “appreciate” some art, Portal 2 delivers a solid 10 hours of riotous comedy. This would be hard enough in more standard comic forms – there’s a reason why most stand-up routines clock in at 90 minutes. But we’re talking about a game here, a format where you perform directly to one heckler who’s on stage with you and will probably try to wrestle you for the mic.

Portal 2 gets around this by generally keeping the mic out of reach, the intro/puzzle/outro structure highlighting natural places to include jokes so the player can’t ruin them. Occasionally though, the game lets you hold the mic for a few seconds. One of my favourite jokes from the entire game is when Wheatley tries to get Chell to speak at, at which point Portal 2 prompts you to press the jump button. “Ok, what you’re doing there is jumping,” Wheatley replies. “You just…you just jumped.” 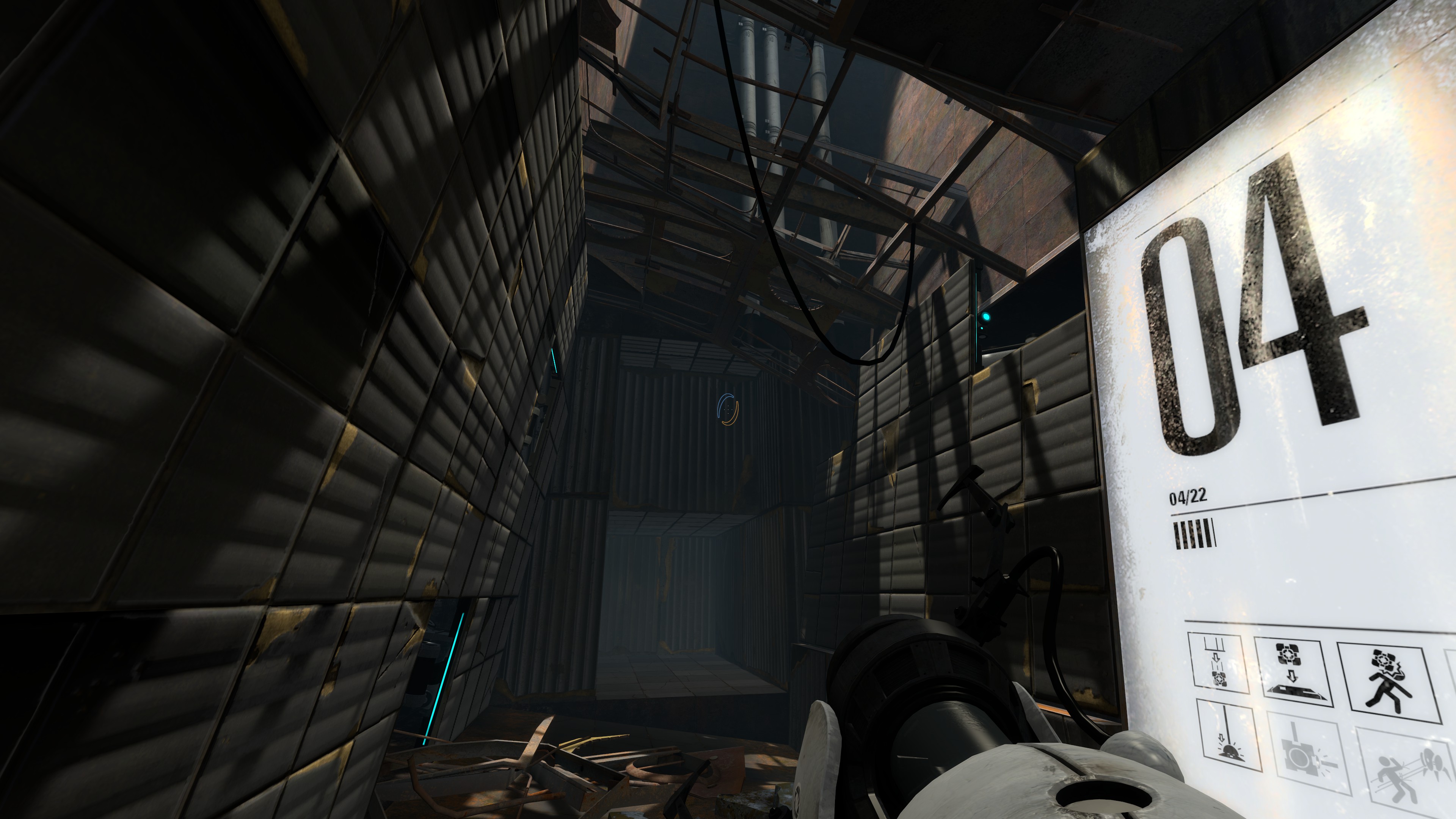 What really makes the comedy tick, however, is how it derives from the game’s excellent characters. Wheatley’s benign and later malign stupidity, Cave Johnson’s disregard for both negative thinking and workplace safety, and of course, GlaDOS’ psychopathic bullying, intensified now that she and Chell have a history. It’s one of those rare games where both the writers and the voice-actors are on absolute top form, resulting in this electric energy that Portal 2 somehow maintains for its entire running time.

Yet while Portal 2’s comedy is superb, it’s not the reason that I still enjoy it after a dozen play-throughs. Neither is it the puzzles, which I know off by heart alongside the jokes. No, the reason I love Portal 2, and think it’s such a worthy sequel, is how it opens up Aperture Science for the player to explore, transforming it from a series of pristine white chambers into this beautifully impossible and yet coherent space. 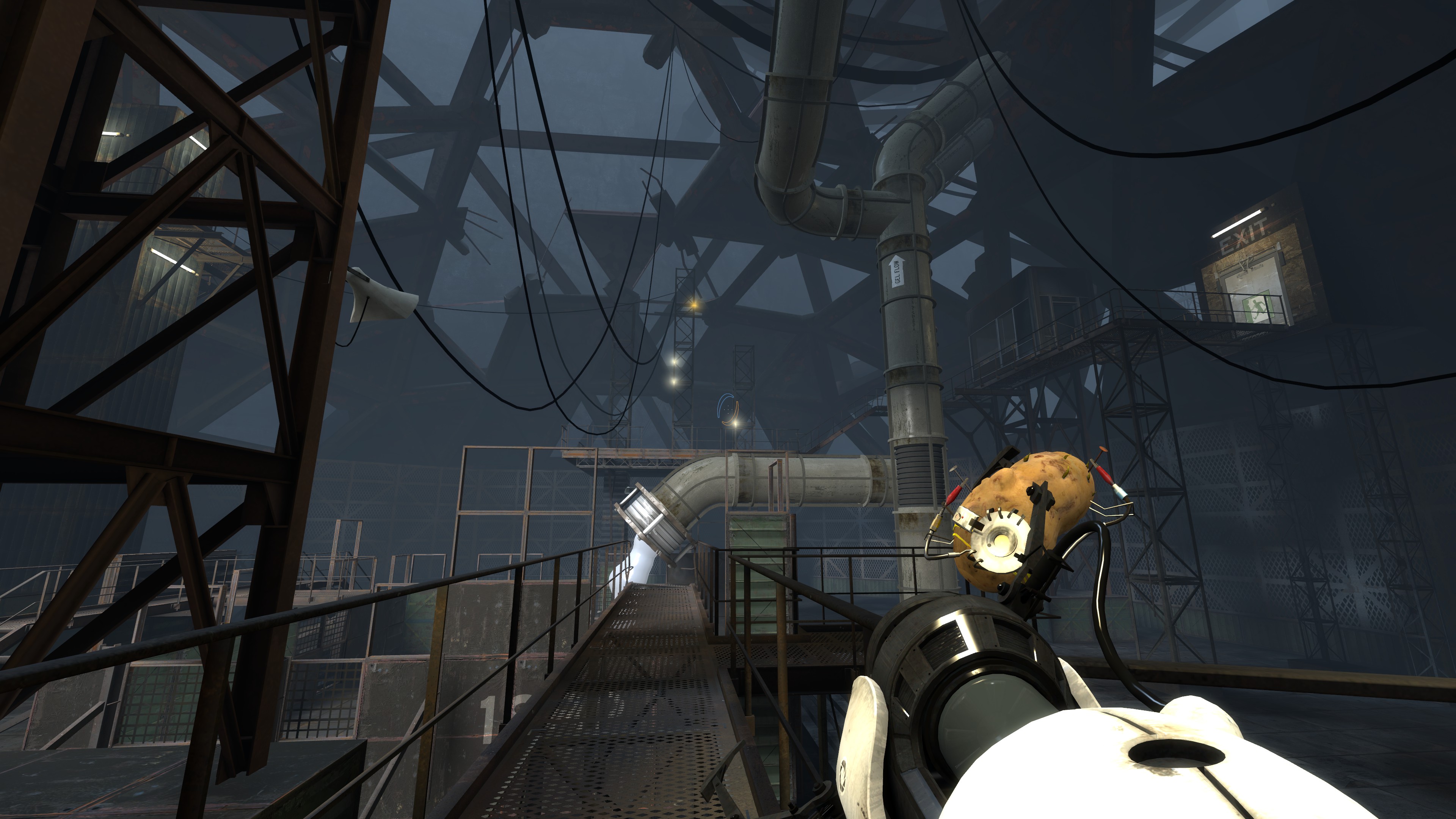 The Source engine has long enjoyed a passionate affair with industrial spaces and urban decay, of which Portal 2 is arguably the best example. Specifically, I love how Portal 2 bakes time into its environments, first transporting players uncountable years into the future, where nature slowly reclaims the gargantuan spaces Aperture’s scientists and engineers took from it. Then, just at the point where GlaDOS rebuilds Aperture into a place we recognise, Portal 2 plummets into the past, with the voice of Cave Johnson guiding us through Aperture during the atomic age.

Here, we explore Aperture’s vast concrete underbelly, where primitive, analogue test-chambers are locked away behind Fallout-style vault-doors. Yet even down here among Aperture’s deepest secrets, time is not static. As Chell explores, the decades tick forward, and as both the technology and Aperture’s unseen rivals improve, the tone of the spaces switches from post-war optimism to grimly resisting reality. If life gives you lemons, etc. 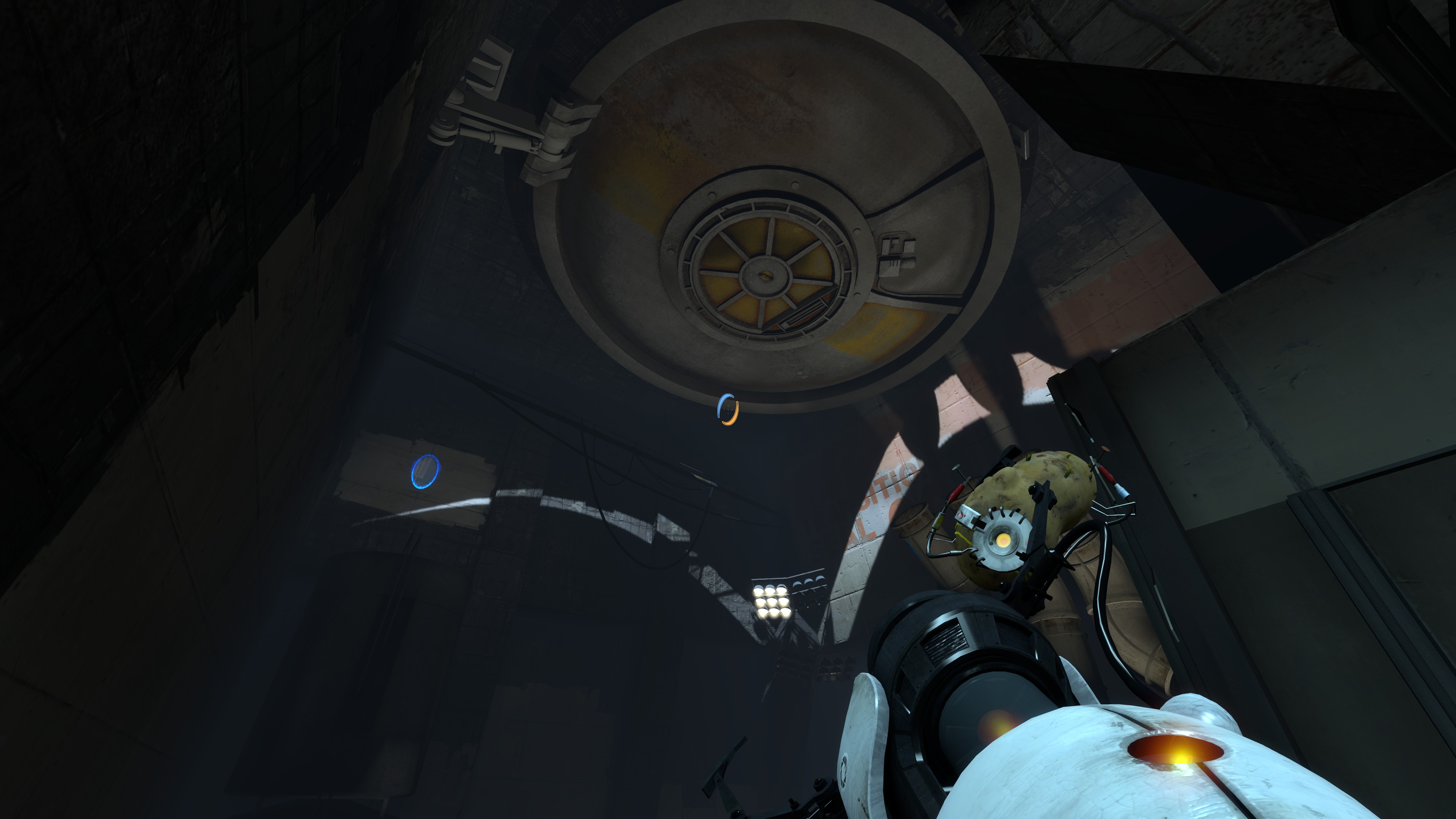 There’s something about the way Valve designs environments that I find irresistible, and I think the Aperture we see in Portal 2 is their most ambitious and accomplished virtual space. It is, ultimately, a fantasy world. But rather than being based on western medievalism, Aperture science’s fantasy is grounded in American exceptionalism and nuclear anxiety. Much like the Fallout series, although Portal 2 is subtler in its influences.

There’s so much more that contributes to Portal 2’s enduring brilliance. I completely forgot to mention the coop-mode, which along with Left4Dead is one of the best cooperative experiences ever produced, albeit far less replayable. But the community has found a solution to that. Check Portal 2’s Steam workshop, and you’ll find hundreds of thousands of Portal 2 maps both single-player and coop. Some of these are as good if not better than the maps Valve themselves designed, with everything from brain-melting chambers to comedy side-stories to entire new campaigns. 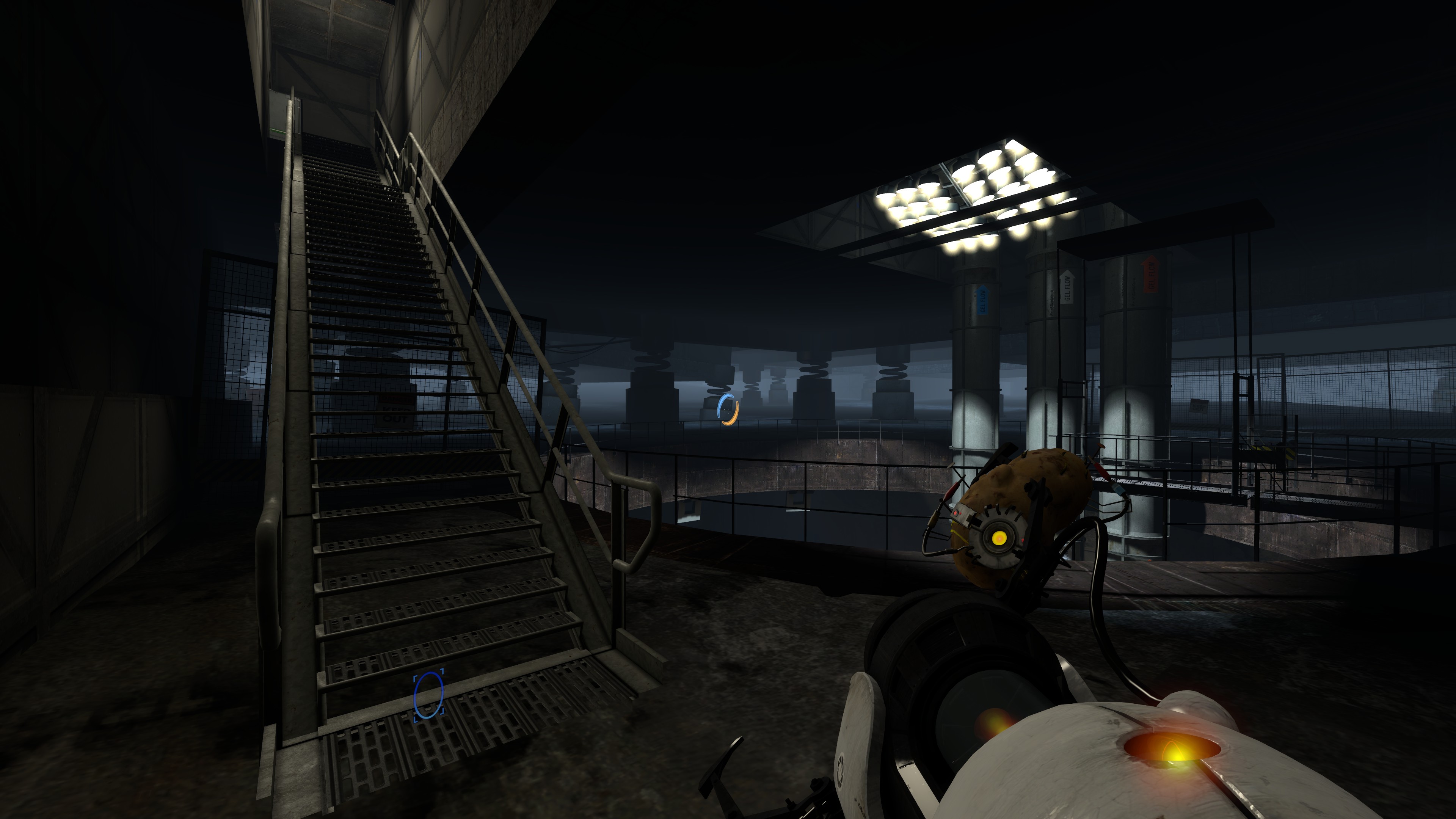 I think it’s this community that is Portal 2’s most important legacy, because despite being regarded as two of the best puzzles games ever made, no other games have attempted to replicate Portal's particular brand of spatial puzzling. There are plenty of games influenced by Portal, but there’s nothing that tried to take its mechanics and spin them out in a different way. If there hadn’t been a Portal 2, therefore, that two-hour slice of puzzling packaged into The Orange Box might have been all we got. But because of Portal 2, Aperture Science’s vast underbelly has been infinitely expanded, offering all the space-warping puzzles and infrastructural exploration that you could possibly want. Portal may not have needed a sequel, but Aperture Science deserved one.