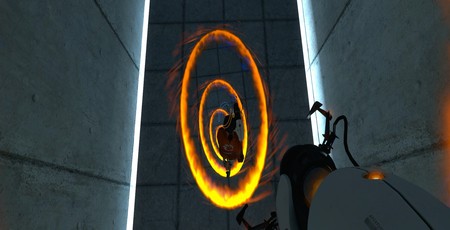 It's hard to think back to the time when Portal was the cute little experiment that Valve bundled together with Half-Life: Episode 2 and Team Fortress 2. Before The Orange Box came out, however, that's how the marketing was angled. You got the next part of what was arguably the best game in existence at the time, plus the madly characterful sequel to a stalwart multiplayer Half-Life mod. Oh, and you get Portal as well. I struggle to gear my brain into thinking like that. But I do remember the moment those gears changed. It was when I saw Portal in motion for the first time in its pre-release trailer. More specifically than that, it was the image of Chell falling forever through holes in the ceiling and floor, infinite versions of herself visible as if she was standing between two mirrors.

It was the first time I was really struck by the notion that games can do things that other mediums can't. I had an implicit understanding of this throughout my youth, of course. Every time I fired a gun in Doom or raised an army in Total War, that knowledge was dozing in the back of my brain. But that image of Chell tearing a hole in space and then plunging into it was a clarifying moment. No other artform can do that. They could describe it, or visualise it through special effects, but they couldn't let you experience what it is to bend the laws of physics with your own fingers. And that was just from watching the trailer! I had no idea of the surprises that awaited in the game itself. GlaDOS! Jokes! Songs! And of course, that magnificent mid-game twist that sees you punch beyond the confines of the test-chambers, and lets you feel like you're breaking the rules all over again.

One of Portal's greatest joys is how clever it makes you feel. That moment when GlaDOS tells you that the next test is impossible, and then of course you solve it and she pats you on the back. When you learn that you can propel yourself across vast chasms by leaping through ascending sequences of portals. When you first encounter those nasty little gun-turrets and disable them by dropping one gun turret on top of another gun turret. The game is a constant drip-feed of learning-induced dopamine. Of course, you're being manipulated like a puppet all the while, through subtle visuals cues and meticulous placement of objects by the level designers. Even GLaDOS' jokes act as little rewards for the player, a nugget of joy dispensed by Portal's mind-bending Skinner Box. It's fascinating how thematically similar Portal is to Irrational's Bioshock, released just a few months earlier. Clearly there was something in the water at the time, as both games are deeply concerned with the relationship between the illusion of player freedom and the reality of designer control. Yet whereas Bioshock explores this through grandiose speeches and lavish art-deco architecture, Portal is far more nonchalant about the whole issue. You're a lab-rat. We're in control. Here's a joke about cake, now off you go.

Perhaps what I like most about Portal is how stripped-back and unpretentious it is. It's a game that works enormously hard to appear casual and effortless. Everything from the art to the audio design is minimalist, sleek, and functional, yet everything serves a purpose. The simple white walls of the test-chambers act as a canvas for you to tear holes through, and help the key component's of the room's puzzles to stand out. But this pragmatic approach to visual design also helps to distinguish the game. At a time when many mainstream games from Crysis to Modern Warfare were pushing towards photorealism, Portal's restrained aesthetic helped it stand out from the crowd. There's also no fat on Portal whatsoever. It's one of the most delightfully direct games ever produced. Obviously, Portal is a famously fleeting experience. But there's more to it than that. Portal features no mechanical frippery whatsoever. Every new object Portal introduces is designed  to open up new ways for you to explore the core concept, from the weighted cubes to the energy balls to the gun turrets. There's nothing superfluous, no unnecessary gadgets or bolted-on crafting system as you tend to find today.

The mainstream industry could still learn a lot from Portal, with so many of today's AAA releases being so terribly overwrought. What's interesting though, is that while the mainstream industry may have conveniently ignored many Portal's design lessons, the indie sector studied them meticulously and blossomed. Portal may not be an indie game itself, but as a template for an indie game it is nigh-on perfect. The way it focuses on exploring a single idea. How it prioritises personality over power, concept over content. The way it obliterated the taboo that games must be a certain length to be considered good. Portal was one of the first games to demonstrate that brevity can be an asset rather than a flaw, and this made it a whole lot easier for other developers to create and sell short, experimental games.

What's fascinating about all of this is that Portal's genius stems from the tiniest alteration of perspective. At the end of the day, when you cut through the puzzles and the aesthetic and the witty script, Portal is just a linear first-person shooter, perhaps the most unremarkable of video-game genres after the two-dimensional platformer. You hold a gun, you walk through corridors, you shoot stuff. All Portal does is adjust its aim from shooting holes in people to shooting holes in walls. That's it. That's Portal's big idea; it deliberately misses the target, which goes to show how the tiniest change in thinking about an artform can result in huge ramifications for that artform Obviously I'm oversimplifying somewhat. Between that grain of an idea and the game that resulted from it was a lot of work by a lot of people, and  the resulting game might have been very different had any one of those decisions been made differently, if the script had been serious, for example, or if there was no GlaDOS.

This makes it all the more remarkable that everything went the way it did. I don't know if there's such a thing as a perfect game, but in my mind Portal comes close. Certainly, it's as fresh now as it was a decade ago, a wonderful encapsulation of what games can be. Indeed, if I wanted to introduce someone to gaming for the first time, Portal is the game I would choose to do it.