The 10 Best Driving Games of the last 10 years 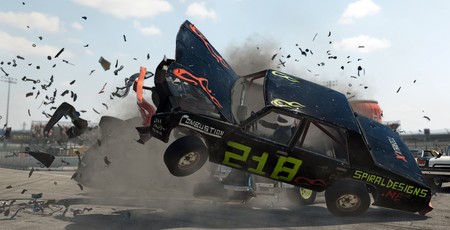 When I think about driving games, the thought usually conjures one of two images. The first is of a sleek, pixel perfect racing game that aims to be as "realistic" as possible, something like Gran Turismo or Project Cars. The other image is Mario Kart – the racing game that’s arguably better known than any other.

In short, "Driving games" is no longer synonymous with "Racing games" (if it ever was). This breadth of experience is something I wanted to focus on with this list. All the games mentioned below focus exclusively on driving, so you won't see mention of broader open world games like GTA or Mad Max (tempted as I was to include the latter, that game has some awesome car chases). What you will see, hopefully, is just how much driving games have to offer in the year 2021. So let’s buckle up, start the engine, and hit the gas. 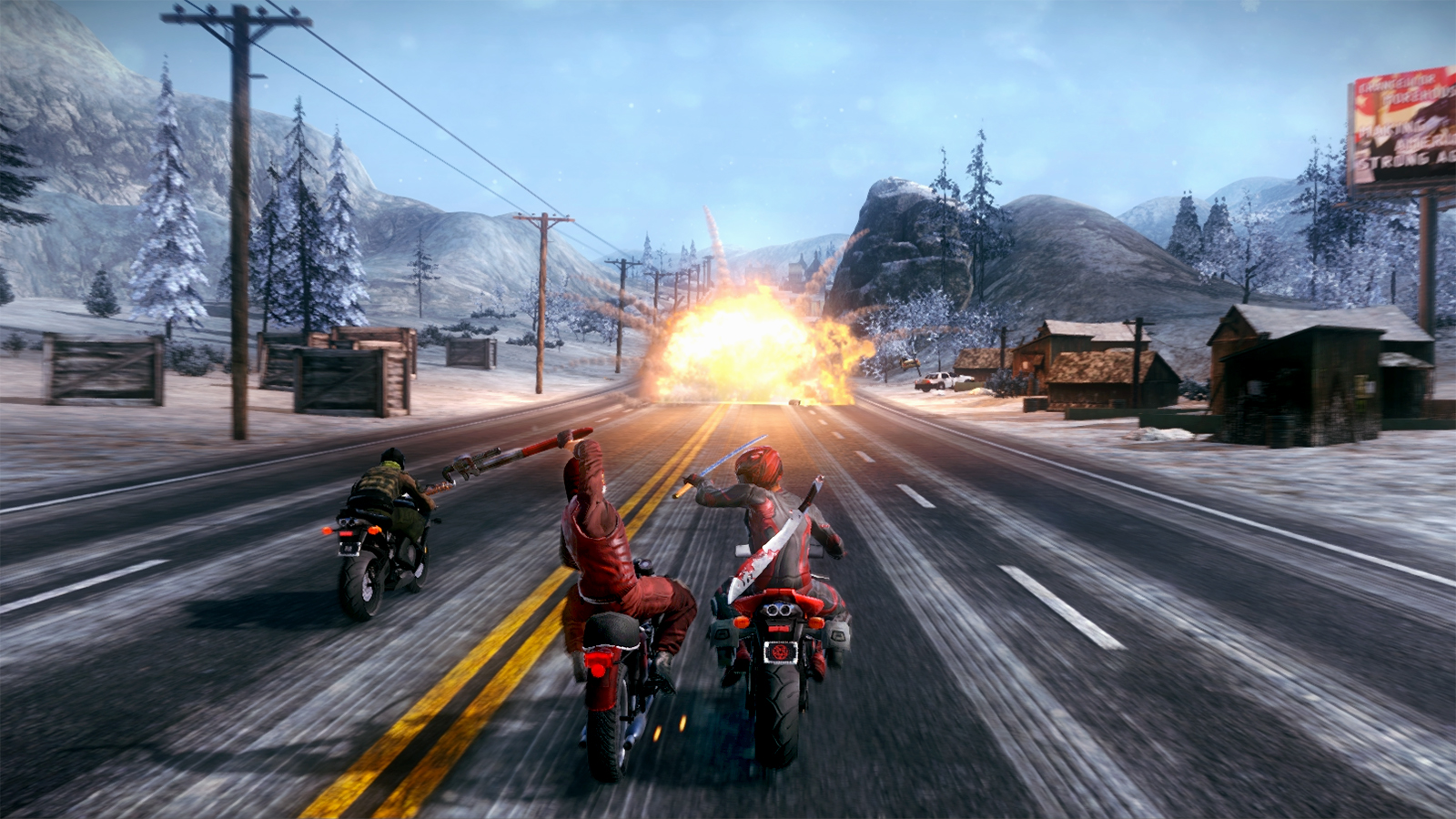 Road Redemption is a spiritual successor to the iconic SEGA Megadrive biking game Road Rash. It sees groups of grizzled bikers battling it out to win a series of extreme, cross-country motorcycling races.

When I say "battling it out" I mean that literally. What sets Road Redemption apart from other racing games is that victory can be achieved by any means necessary. You can try to win by racing fair and square. But you can also kick you rivals off a mountainside, bludgeon them with a variety of weapons, and even shoot their bikes with guns until they explode. What’s more, they can do the same to you, harassing you mercilessly all the way to the finish line.

What results is an utterly ridiculous yet completely thrilling mixture of racing and beat 'em up-style action. Road Redemption is a splendid tribute to one of the most unusual racing games in the history of the medium. 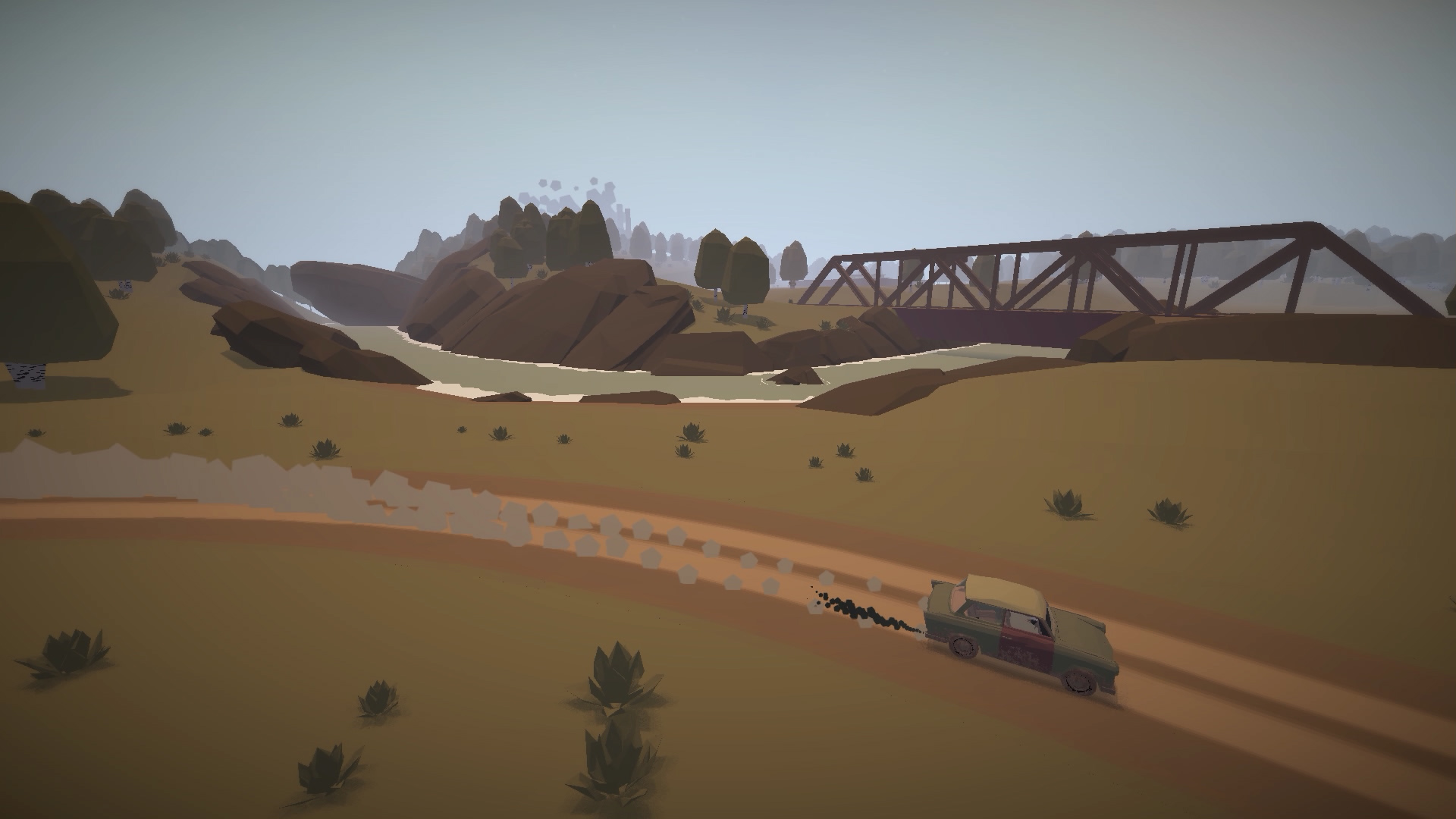 Jalopy is a deliberate response to driving games being all about gleaming genital compensators striving to be the first to draw a set number of circles using the rubber of their tyres. Developed by British designer Greg Pryjmachuk, it's a game about taking your elderly uncle on a road trip across Communist Eastern Europe in a rundown Laika 601 Deluxe.

Jalopy is about the mechanics and experience of driving, not as a sport, but as an everyday activity. The titular jalopy is the kind of vehicle a regular person in that place and time could afford, and you must look after it to get where you need to go. Tyres need to be changed, your engine maintained, filled with oil and water. You need to regularly stop at petrol stations to refuel and stock up on vehicular essentials.

Your reward for fastidious vehicle maintenance is a gently engaging road-trip from East Germany to Istanbul. You’ll watch the countryside roll and change as you drive, stay overnight in affordable motels, and listen to your uncle wax lyrical about the journey and life in general.

Jalopy a celebration of cars not as status symbols or engineering marvels, but as tools of liberation, exploration, and learning, opening up lives to new horizons and experiences. 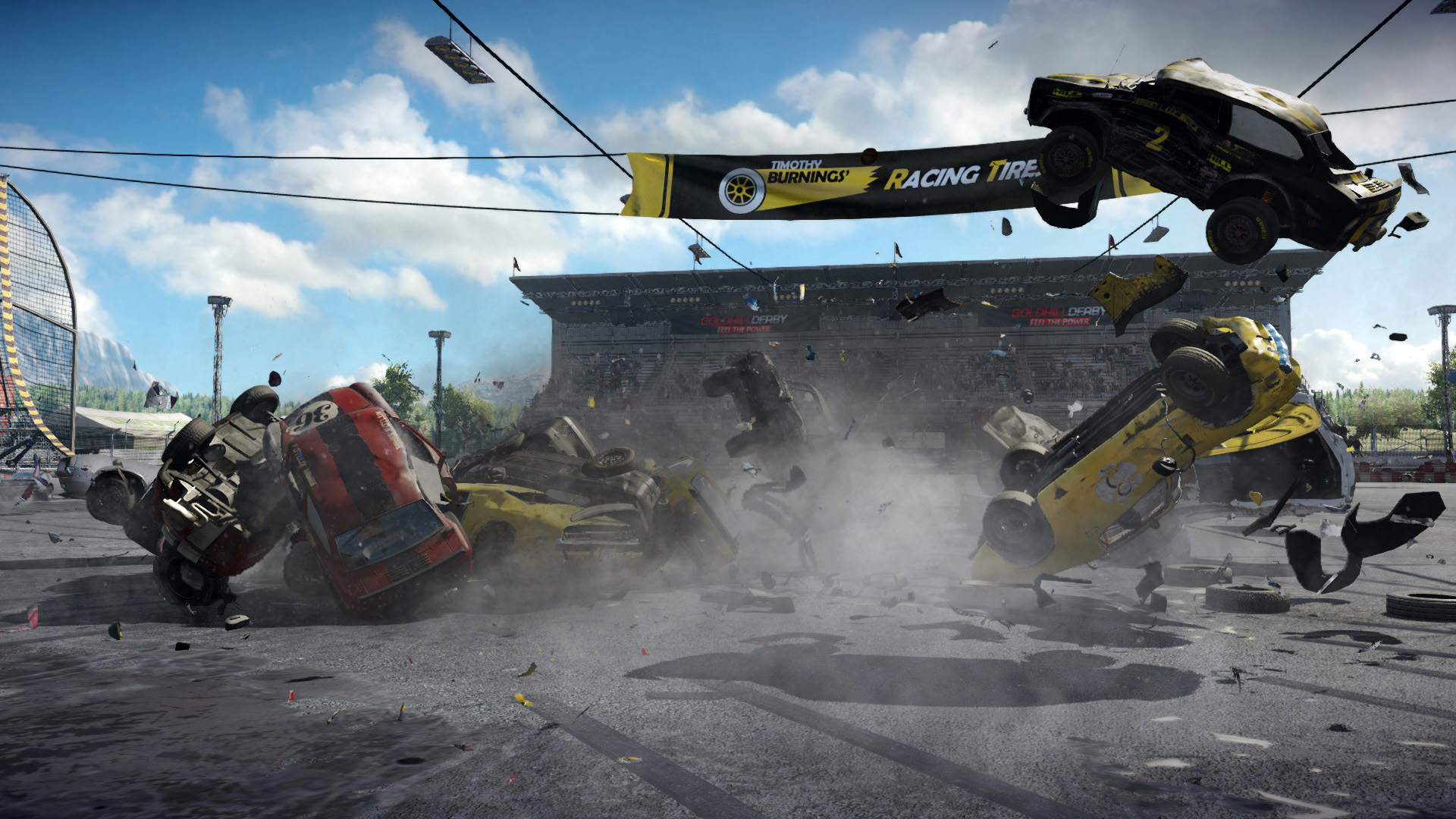 Boasting one of the best titles of any racing game ever, Wreckfest is all about what happens when two cars go crunch. Bugbear’s racer is built around a meticulous simulation of soft-body physics, and how that relates to the chassis of a car when it slams into a concrete barrier at 100 miles an hour.

Destruction-focussed driving games always sound like fun, but making them consistently enjoyable for any length of time is actually quite difficult. It's this that makes Wreckfest special. Its tracks and stages are carefully designed to encourage carnage, while still enabling the game to function effectively as a racer. Some tracks are sprinkled with obstacles designed to trigger a pile-up, while others boast treacherous figure-of-eight layouts that intersects in the middle.

Coupled with some wonderfully creative stages, such squaring off against twenty buses in a three-wheeled-van, all this makes Wreckfest a delightful destruction extravaganza. 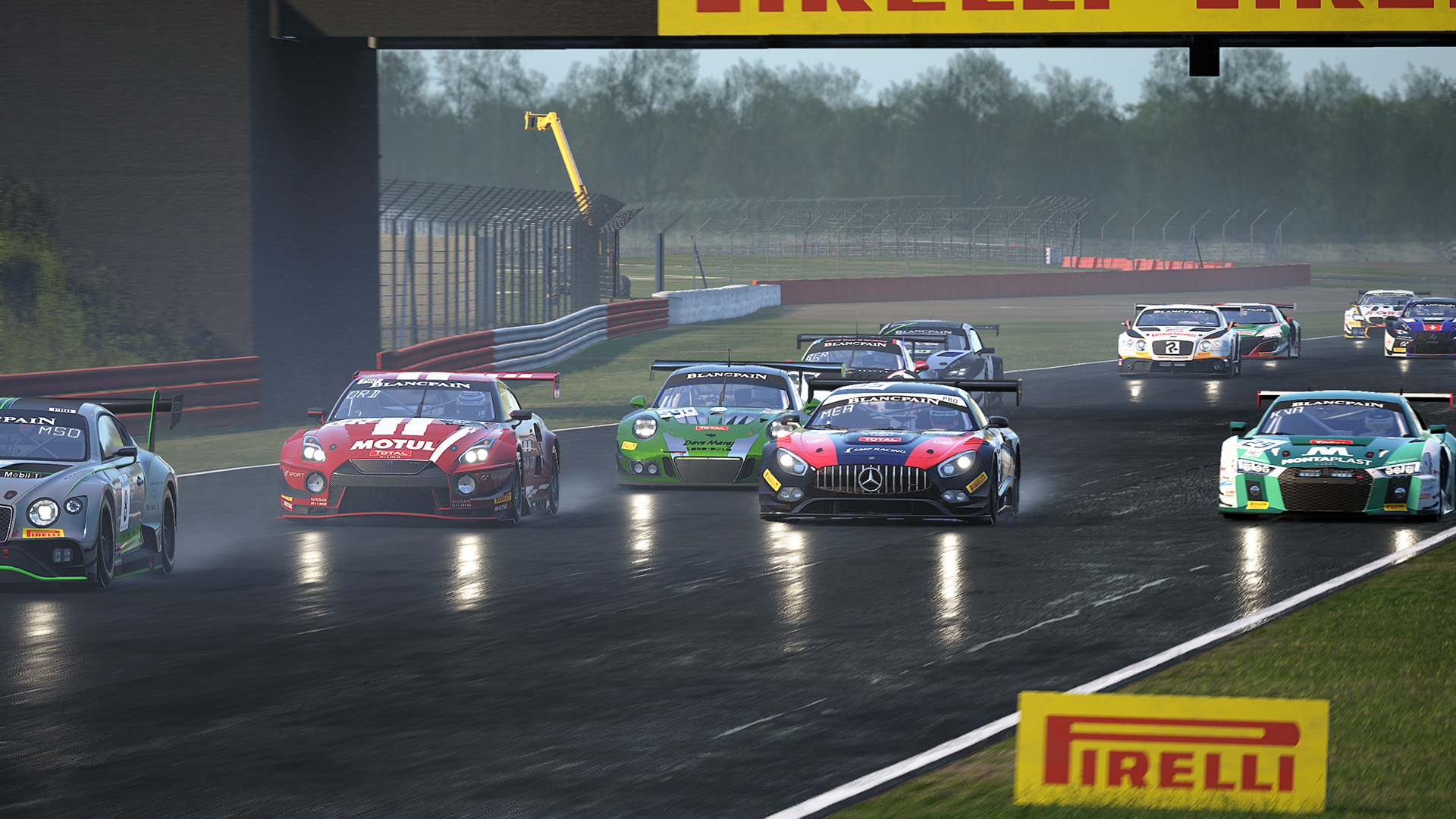 Combined, the two Assetto Corsa games arguably represent the best racing simulations around. Despite being almost seven years old, the original Assetto Corsa still has one of the finest vehicle handling models in any racing game, and with a few mods installed can rival more modern games for visual fidelity. Competizione, meanwhile, expands upon the features of Assetto Corsa, adding things like lengthy endurance races for you to test your skills to the limit.

Both games rival the authentic feel of iRacing, but without the eye-watering subscription fees. If you want to experience GT Racing at its most convincing, then Assetto Corsa and its follow-up are the games for you. 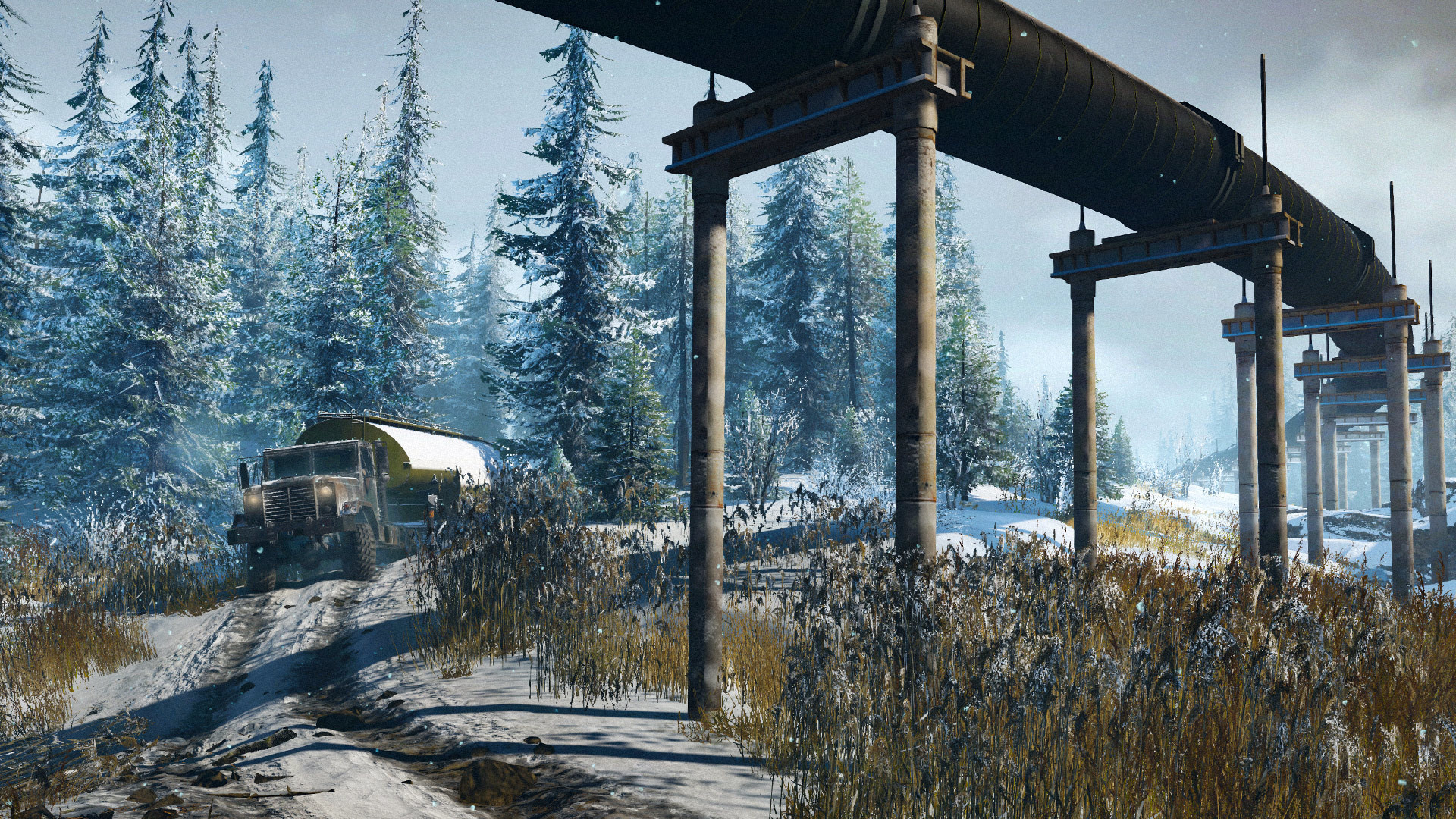 Snowrunner is almost the antithesis of Assetto Corsa, similarly focussed on delivering an authentic driving experience rooted in real-world physics, but in service of an entirely different style of driving. In Snowrunner, your vehicles of choice aren't grunting terrifyingly fast GT Racers, but eighteen-wheeler trucks and hulking four by fours. Instead of driving them around a perfectly, manicured track, you're hauling them over snow-covered mountains or mud-filled rivers.

Snowrunner is basically a driving puzzler, where you must figure out how you're going to get your vehicle and its cargo across terrain hostile to the entire concept of driving. If you've ever seen the William Friedkin film Sorcerer – it's basically trying to recreate that experience, only without the dynamite. It's about churning through gallons of mud at 4 miles an hour, fighting the laws of nature with every gear change and every touch of the accelerator. It's about getting your vehicle completely stuck, then having to wheel out a different vehicle to tow the first vehicle out of the mud.

With gorgeous open-world maps filled with tons of challenges, Snowrunner is a brilliantly unusual driving simulator that'll test your skills at the wheel in a whole new way. 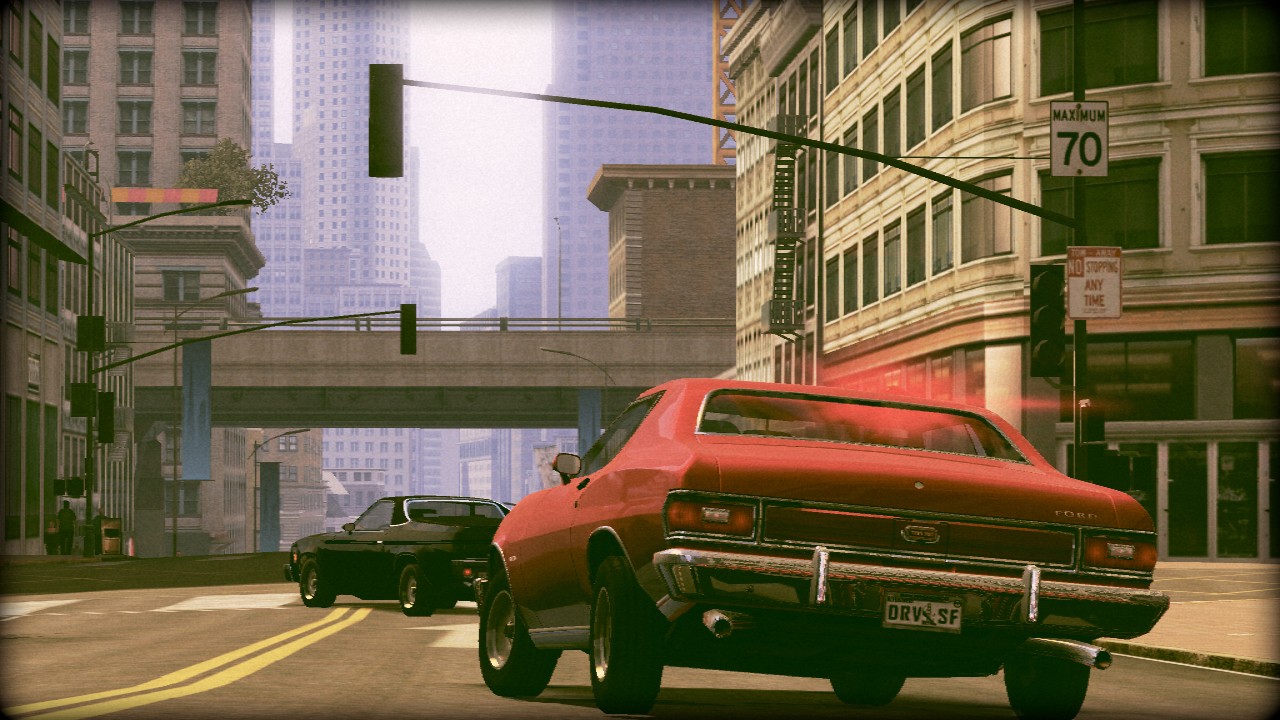 With its tenth birthday in September, Driver: San Francisco squeezes into this list like a veteran wheelman slipping down an alleyway to evade the cops. I’m glad it’s made a successful getaway, because I don’t get the opportunity to write about the last, best Driver game nearly enough.

It’s also a stupendously odd game, bearing both a premise and a core mechanic that seem antithetical to creating a fun driving experience. The main character, Tanner, is put into a coma at the game’s outset, with the rest of the story taking place entirely in his head. This is the excuse Ubisoft Reflections use to introduce the Shift mechanic, whereby Tanner’s consciousness can seamlessly switch between any cars on the road, possessing them like some vehicular demon.

Frankly, it shouldn’t work. But not only does it work, it does so brilliantly. Missions are all about chasing down bad guys and evading the cops. To that end, the Shift mechanic lets you use random vehicles like weapons, battering your opponents with traffic missiles. In short, it lets you choreograph your own 70s-style car chases while you play, making San Francisco one of the most action-packed driving games around. 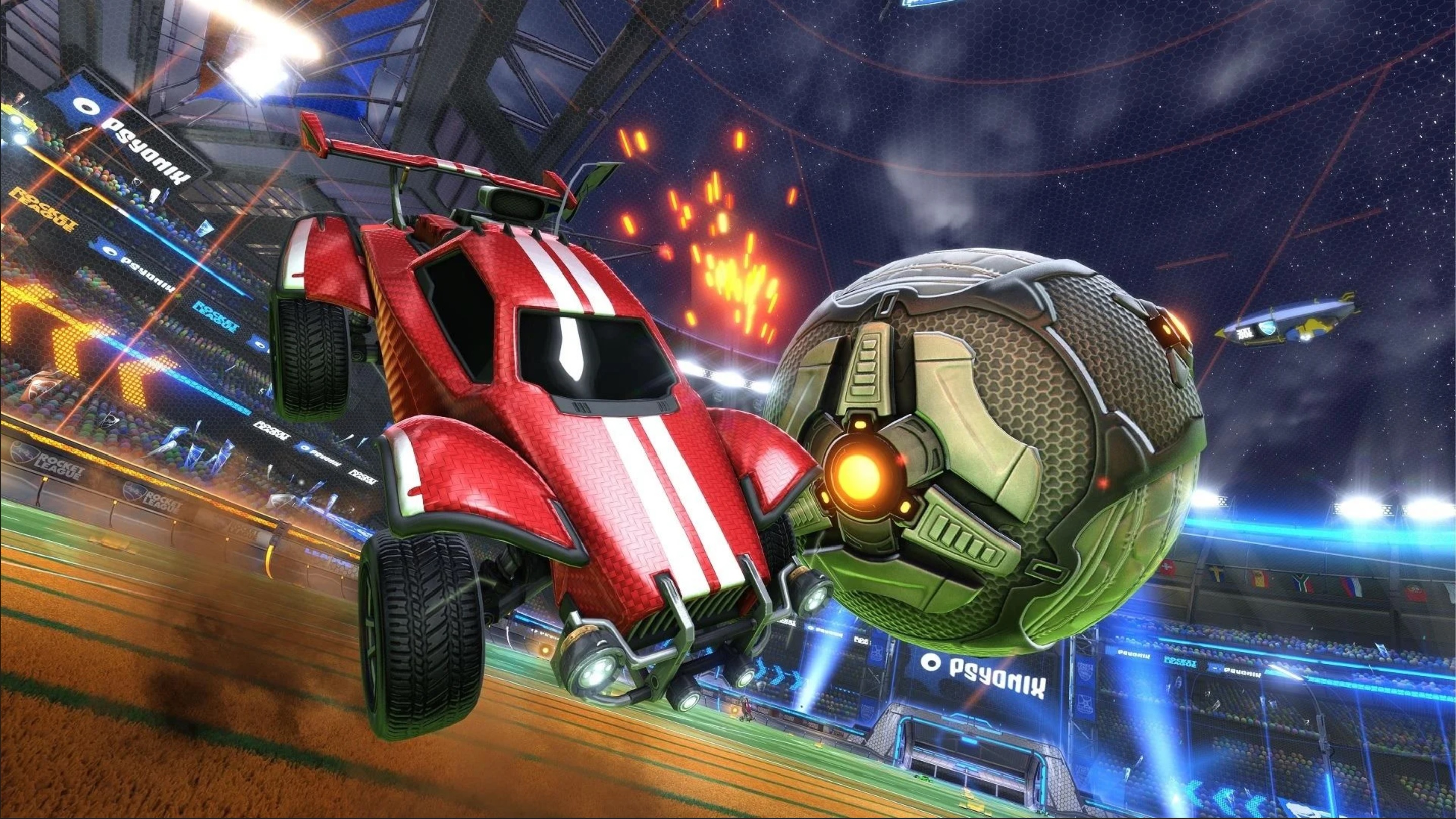 “What if football, but with cars?” is one of those video-game ideas that really should have been thought up way earlier than 2015. It’s the perfect concept for a smash hit, and I’m amazed nobody thought of in the entire half-century in which video-games have existed.

We’re lucky, then, that it was Psyonix who eventually cottoned onto it, as I doubt anyone else could have done it better. Rocket League’s premise is simple, two teams of nitrous-enhanced automobiles compete in a walled arena to score goals with a ball the size of a house. Cars can drive up walls, jump flip, and propel themselves using high-powered afterburner.

It’s this control system that makes Rocket League so compelling, perfectly poised between easy-to-learn and hard-to-master. Timing your sprints to intercept the ball, learning how to hit it at the right angle so it bounces where you want, figuring out the nuances of dribbling along walls, it’s a fascinating exercise in learning how to think and react in three dimensions.

Beyond this, Rocket League is just an agreeably designed game, with a bright and bold aesthetic, upbeat music, and goals that explode when you score, sending all nearby cars flying across the pitch. It’s as much a delight now as it was six years ago, and I expect it’ll be around for a long time to come. 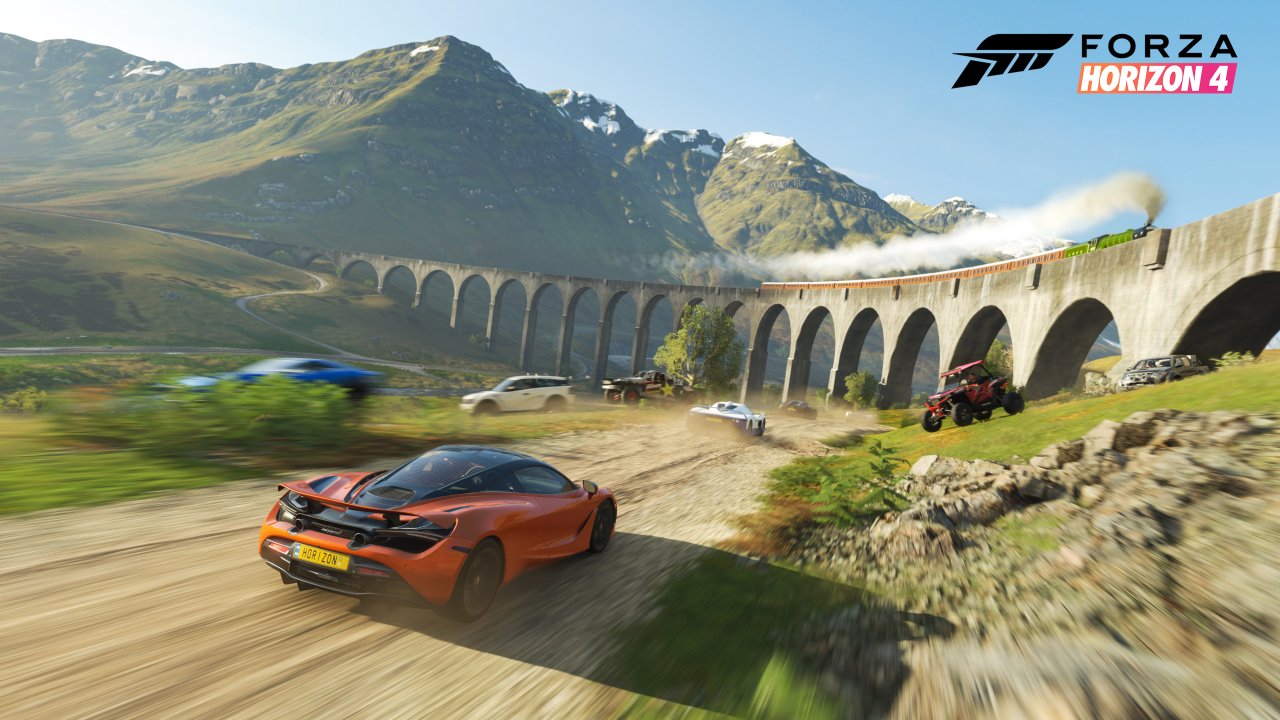 Pound-for-pound, Forza Horizon 4 is the most fun you can currently have in an arcade racer. It’s variety, generosity, and creativity is unmatched by any other racing game currently around. Want to race grunting muscle-cars around the twisting streets of Edinburgh, you can do that? Want to glide around a frozen Derwentwater in an Aston Martin Vanquish while listening to Debussy’s Claire de Lune? You can do that. Want to race against the Flying Scotsman? You know where I’m going with this.

It’s also a wonderful showcase for the better side of Britain, something that seems increasingly hard to see these days. Condensing England and Scotland down to their most picturesque bits, Forza Horizon 4 sees you driving through rolling farmland, bluebell-carpeted forests, and picturesque locations like Ambleside and the Cotswolds. We see these locations change and shift with the seasons, affecting both the game’s general look and the driving conditions of individual races. It’s a colourful and endlessly entertaining celebration of vehicular fun. 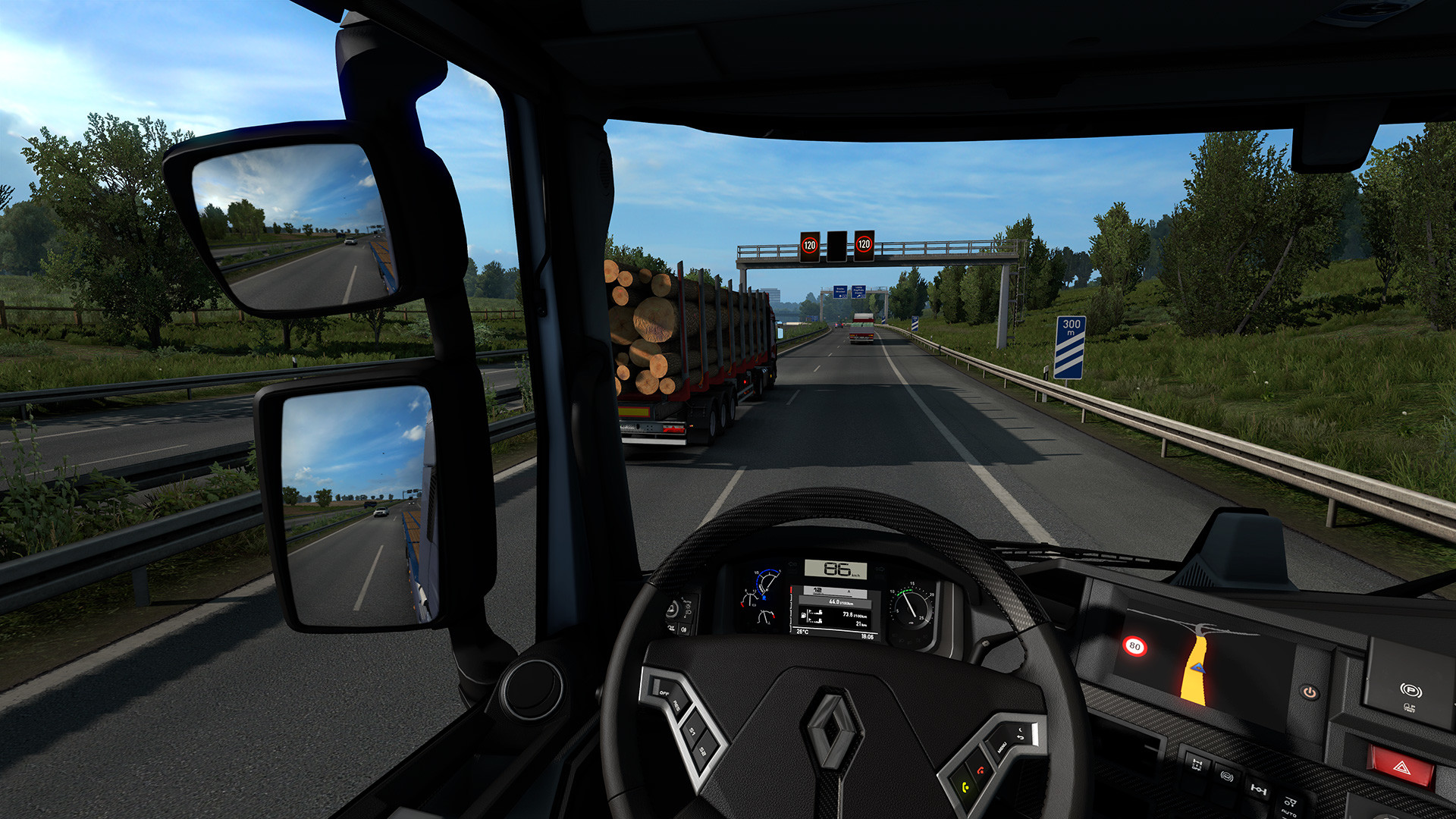 Once an obscure simulator infamously ridiculed by Charlie Brooker in his last review for PC Zone magazine, the Euro Truck Simulator series has grown into the poster-child for everyday simulations. It’s comprehensive yet accessible representation of trucking and logistics in general has proven hugely popular with PC Gamers, with an average of 21,000 players climbing into their cabins in the last 30 days alone.

ETS2’s success is partly down to the care and attention developer SCS Software has lavished upon the game, but it’s also a consequence of the breadth of its appeal. While the vehicles themselves may appeal to trucking enthusiasts, ETS2 is also a great game for chilled-out exploration, watching towns and countryside slowly roll by as you trundle along Europe’s main thoroughfares. And for people who want more of a game, ETS2 offers the chance to build your own trucking empire, diving fully into the experience of logistics management. Indeed, ETS2 is less of a trucking simulator and more of a trucking RPG, a fine example of how there’s no limit to the ways games can entertain. 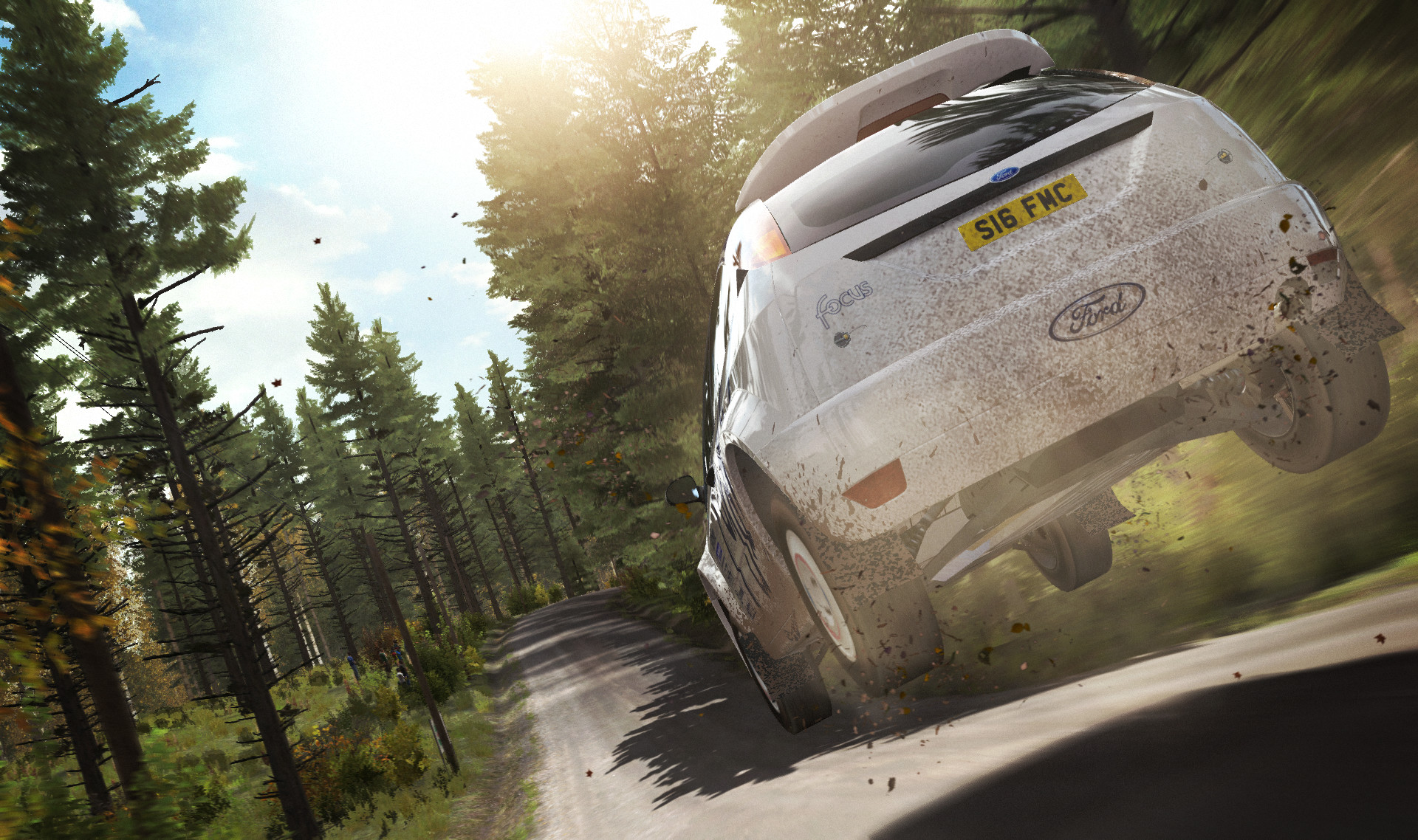 After years of pushing the DiRT series toward more arcade experiences, introducing features like track racing and, uh, “Gymkhana”, Dirt Rally finally saw Codemasters return to proper, simulation-based rallying. The studio rebuilt the Ego’s engine’s physics simulation from the ground up, and released the game in Early Access to ensure the experience was tested to be as authentic as possible (as well as ensuring there was still a market for simulationist rallying games.

The result is one of the best racing games of the last ten years. Also, one of the most frightening. Every race in Dirt Rally is a constant struggle against the laws of physics to maintain control of your car, a high-wire dance between steering, acceleration and brakes to keep your car on tracks and thoroughfares simply not built for high-speed driving. Propelling yourself at 150mph through the forests of Finland along a track about as wide as a pencil is every bit as terrifying as Amnesia or Alien: Isolation. Virtual racing simply doesn’t get more thrilling, making Dirt Rally an essential purchase for anyone remotely interested in things that go “vroom”.