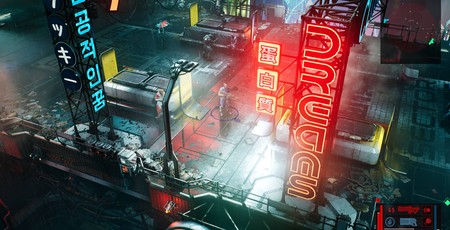 The Ascent is a prime example of style over substance, but when your game has this much style, the need for substance is somewhat diminished. Neon Giant’s cyberpunk debut is a run-and-gun shooter that couldn’t be any more straightforward if its alien megacity was shaped like a giant arrow, but its spellbinding visual adventure carries its more derivative elements all the way to the finish line. 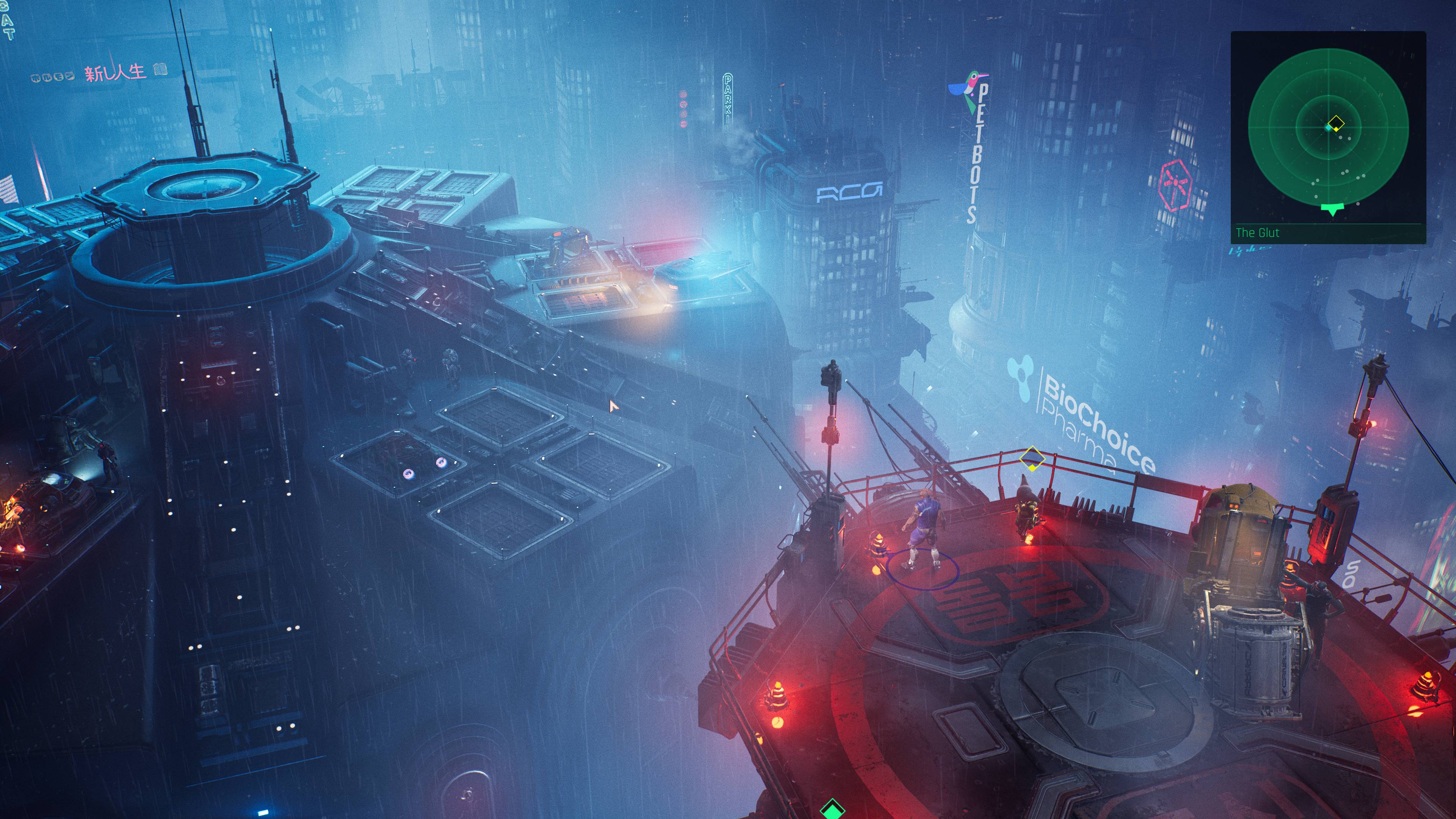 Which is not to say The Ascent is entirely derivative. While the title refers to your character’s journey through both the architectural and social strata of The Ascent’s sci-fi metropolis, it also relates to the more literal Ascent Group, one of several corporations that control not just your home city, but the entire local cluster of nearby star systems. You begin the game working for the Ascent Group as an “Indent”, basically a slave in all but name. Your situation changes radically, however, when the events of your initial mission lead to the entire Ascent Group going bankrupt.

It’s a cool premise for a cyberpunk story. The megacorps of cyberpunk fiction are so often presented as capitalist deities, inevitable, immortal, and omnipotent. To ask what happens when such an inexorable power structure vanishes overnight is a fantastic baseline for exploring the consequences of allowing oppressive corporations to act as governments. Sadly, The Ascent responds with easy answers, with other corporations stepping into the fill the gap, using you as the fist with which they make their power-grab. 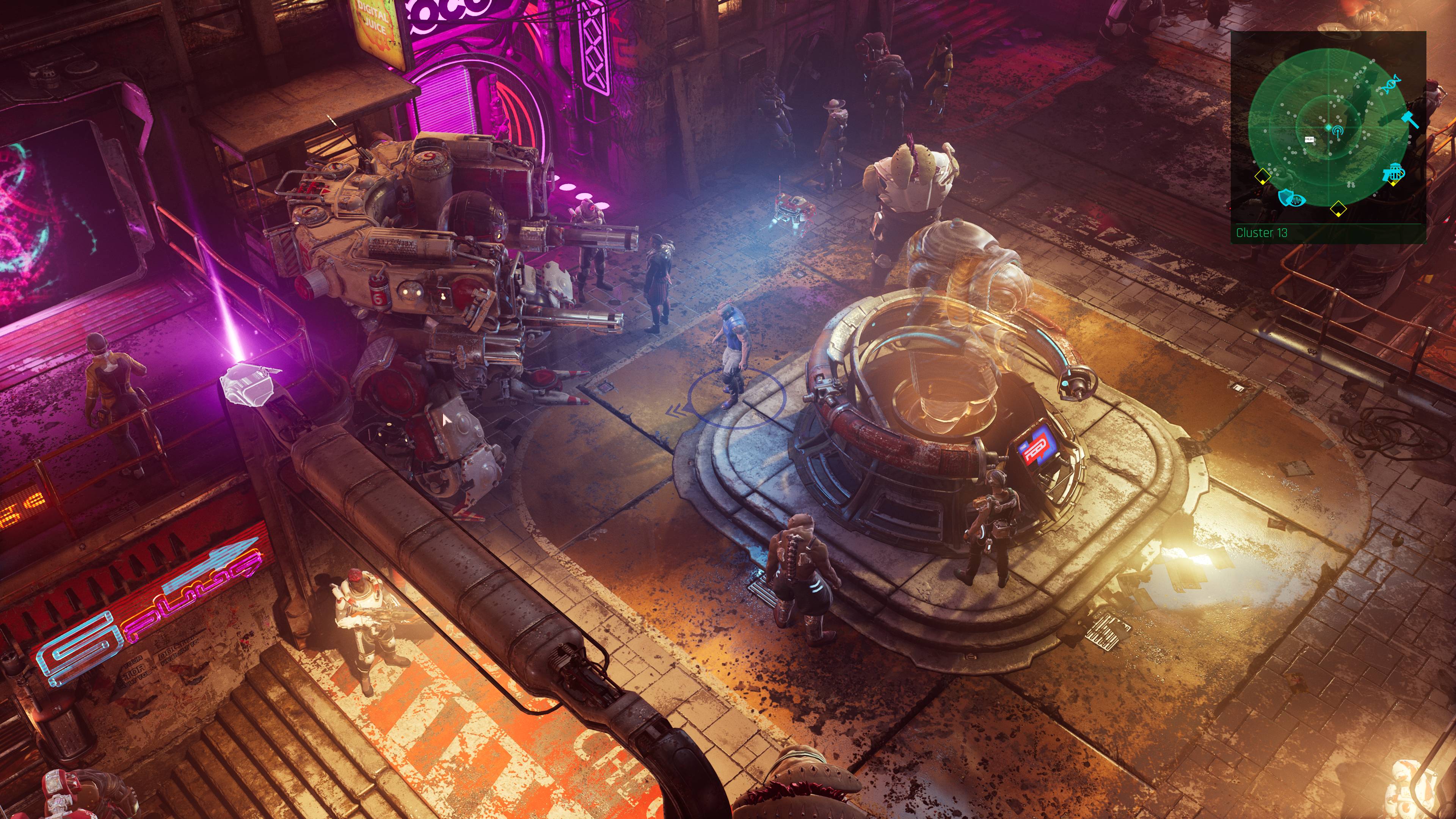 Still, the story is interesting enough to keep you invested mission-to-mission, and the dialogue is impressively written and acted, with a believable fiction and a wry, cynical wit. As I mentioned earlier, however, what really arrests your attention is the world itself. The Ascent doesn’t reveal its neon sublime straightaway. You start off in the DeepStink, the city’s grimy underbelly where all its rubbish and sewage is stored. Soon though, you take the lift up to the main Arcology, where the camera pans around to reveal the impossibly dense urban crush of the skyscraper-city you call home.

The scale of the city is immense, with stacked tiers of buildings overlaid by flickering holographic billboards. It’s an enormously busy place too. The streets are crammed with humans, aliens, and robots that wander around and converse in tight-knit groups, while the air is buzzes with a metal swarm of floating drones, flying cars, and hulking spaceships. 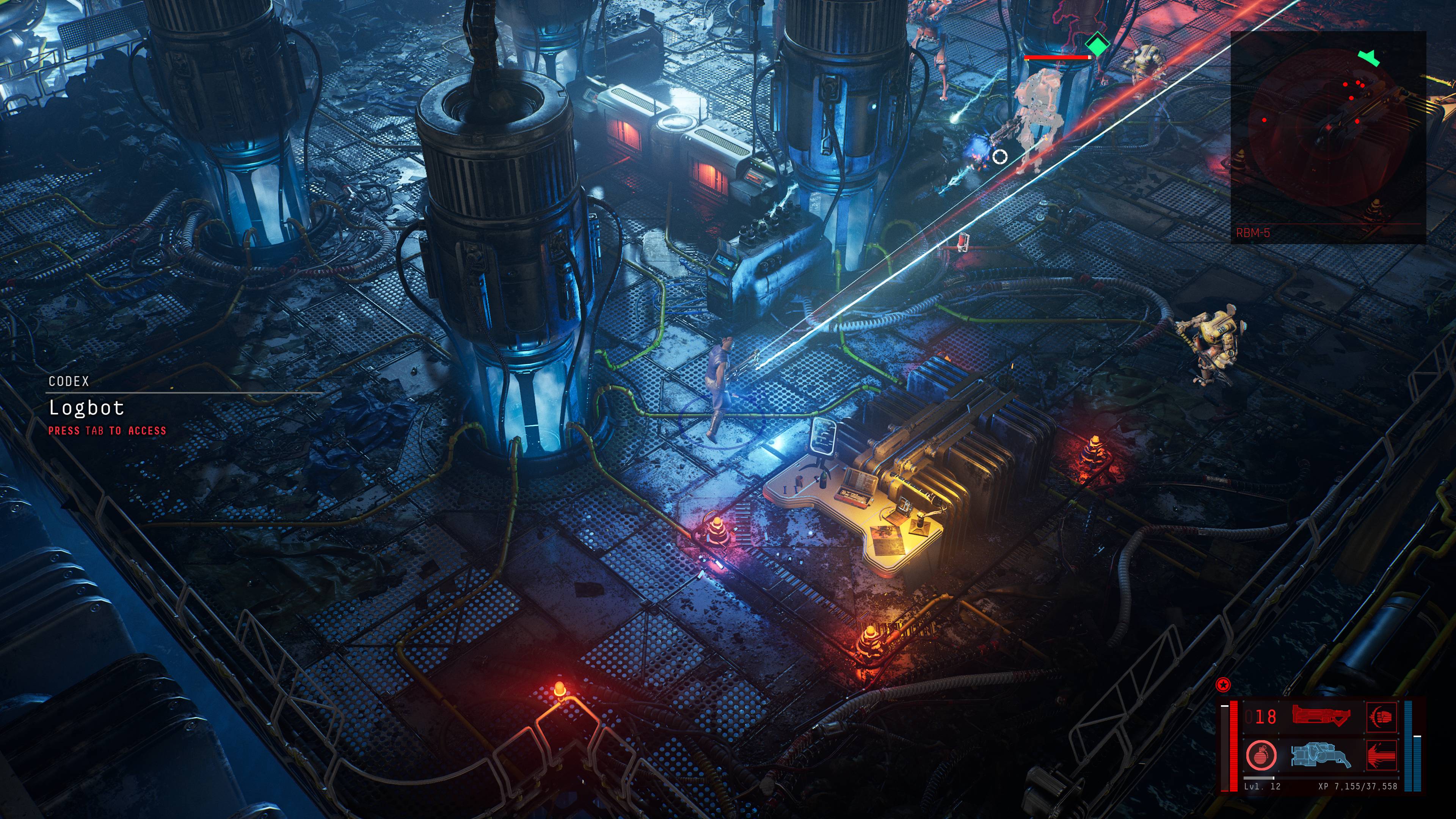 But what really sells the city are its smaller flourishes. Citizens carrying umbrellas with neon-sticks. Street vendors selling boxes of brownish fruit and vegetables. The intensely detailed shops. At one point, I wandered into a store called Grind Media, and hanging from the walls were all manner of hi-fis and sound systems, while columns of TV screens all displayed the message “Safety In Numbers”.

Like Cyberpunk’s Night City, the Ascent’s metropolis is a fantastic place to be. Many of my favourite moments have come from simply letting the city’s atmosphere wash over me. Watching pedestrians go about their business, immersing myself in the hubbub of the city’s bars and clubs. I particularly enjoy riding the freight elevators that slide up the side of Blade Runner-style techno-pyramids. As they ascend, they offer rain-slicked views of the city’s chrome canopy, the game’s dirty synth-and-bass soundtrack pulsing in your ear. 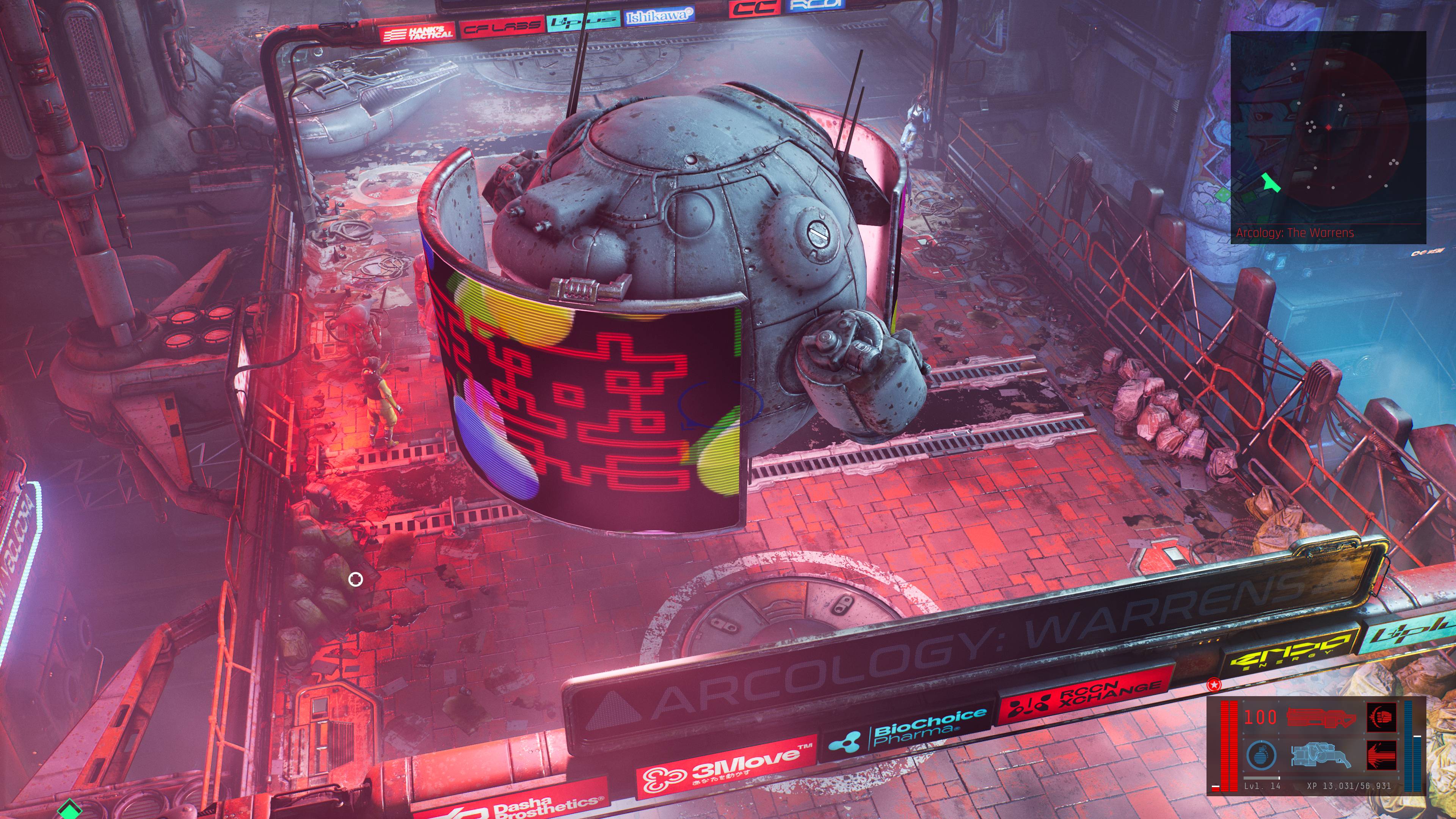 But the Ascent isn’t about sightseeing, lovely as its sights are to see. Instead, it’s primarily about killing things. Each of the game’s twelve story missions (alongside twice the number of side-missions) sees you assigned some grubby task, such as hacking into a secure system, or assassinating a mercenary on behalf of his own company for the crime of getting captured. Whatever your objective, the mission will always involve murdering large numbers of enemies, ranging from mutant Ferals through katana-wielding gangsters, all the way up to ED-209-style mechs.

Battling these foes mainly involves holding the fire button until they fall over, while avoiding falling over yourself either by dodging attacks, or crouching behind cover. The Ascent mixes things up slightly with a few special “augmentation” abilities, such as a powerful energy beam or the ability to deploy robotic companions, as well as tactical abilities that include turrets and grenades. Mostly though, The Ascent is about guns. Lots of guns. 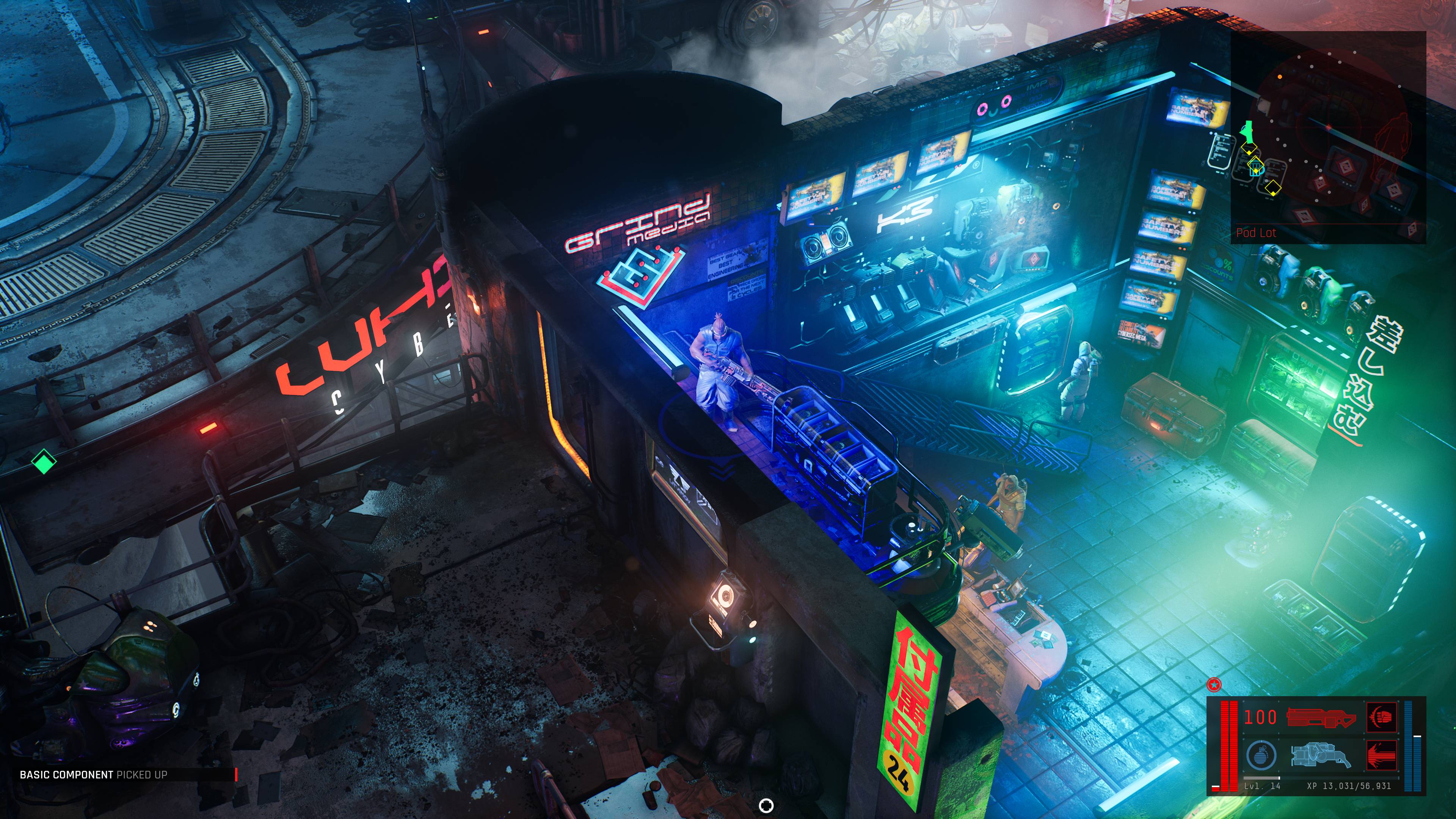 On the whole, I’m fine with this. Focussing on doing one thing well is preferable to Cyberpunk’s approach of failing to be all things to all men, and The Ascent’s laser-focus enables Neon Giant to concentrate on making the shooting feel great. While your early weapons are by no means spectacular, they’re still satisfying to wield, and within a couple of hours, picking up filthy heavy-machineguns like the Dominator, alongside thunderous grenade-launchers and pew-tastic energy rifles.

In its more intense moments, the Ascent Resembles a cyberpunk Diablo, with you frantically juggling abilities to keep hordes of enemies at bay. There are some issues, however. Firstly, while The Ascent can be played solo, it’s obviously not designed to be. This is particularly noticeable in the “tower defence” scenarios that crop up later in the game, throwing hordes of enemies at you that are far too numerous to be reasonably dealt with by a single player. Moreover, successfully dodging or protecting yourself from enemy gunfire becomes increasingly difficult beyond the game’s halfway point, meaning you’re highly reliant on picking up medkits, whether they’re randomly dropped by enemies or purchased from vending machines. 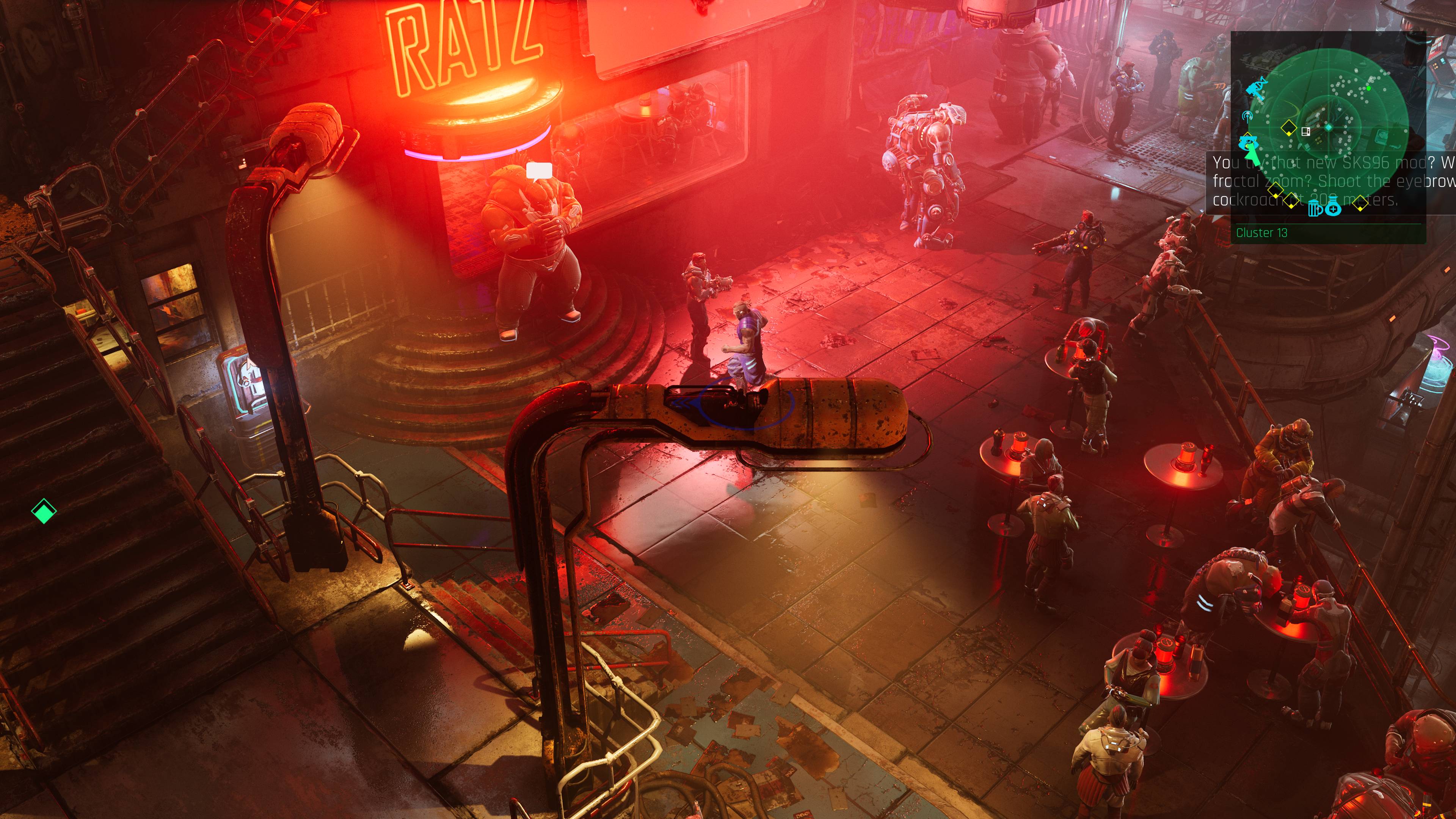 I also encountered one notable bug, and one notable technical issue. The former involved my “Cyberdeck”. Used to hack open certain doors and chests, the Cyberdeck can be upgraded to different levels through the game. Yet the upgrades I picked up didn’t seem to increase the Cyberdeck levels at all, which means I missed out on a lot of loot. Regarding the technical issues, the game would stutter dramatically whenever a large explosion occurred on screen. This meant more intense combat encounters were often reduced to a slideshow, with each bang locking up my framerate like a cybernetic limb in an elevator’s gears.

These glitches slightly inhibited The Ascent’s simple but effective cyberpunk simulation. That said, I still think there’s enough here to warrant a recommendation. The Ascent doesn’t do anything radical with either action-RPGs or the cyberpunk genre, but alongside Cyberpunk’s Night City, it offers one of the more comprehensive realisations of a near-future dystopia, and some satisfying action to go along with it. 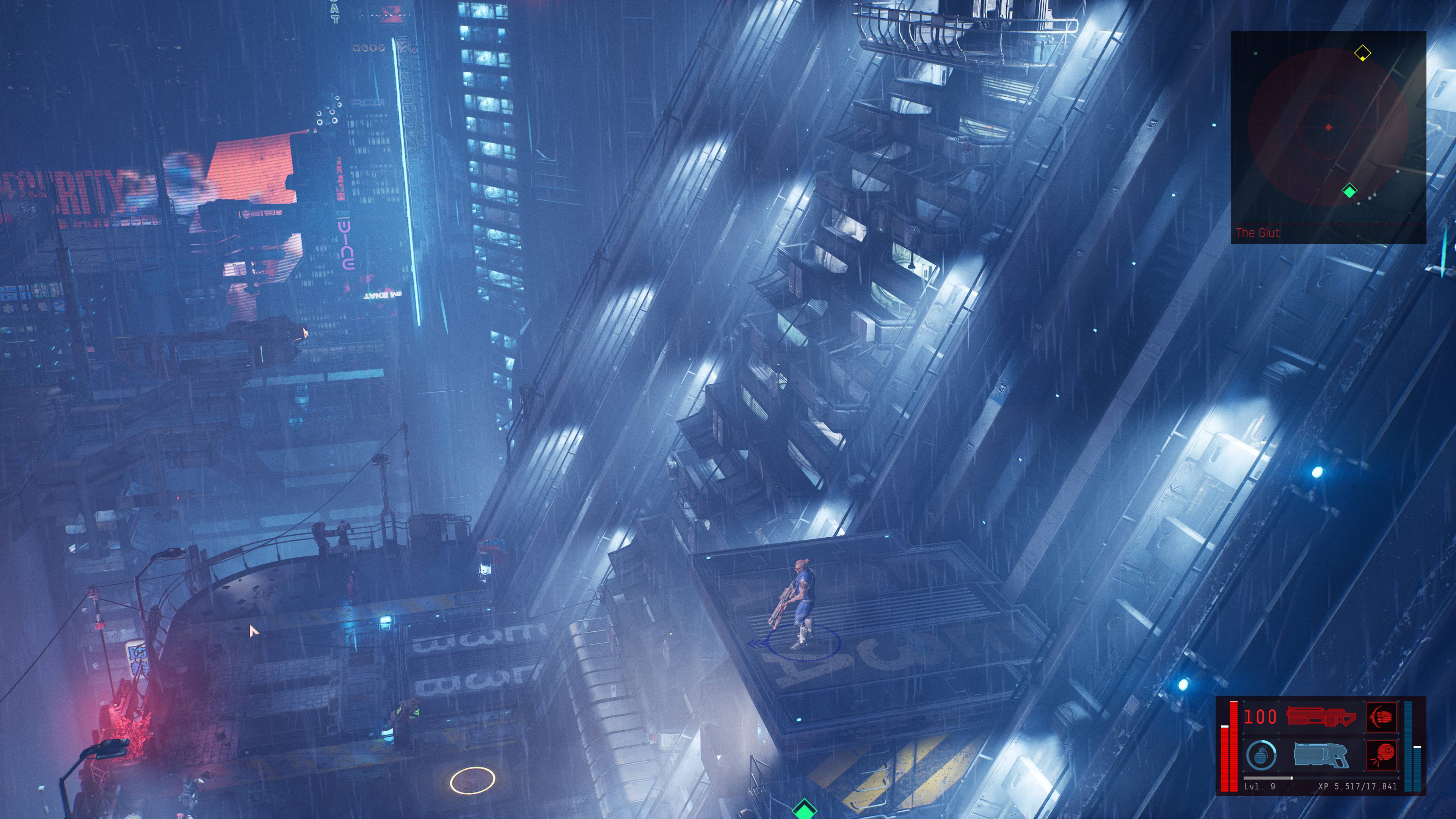