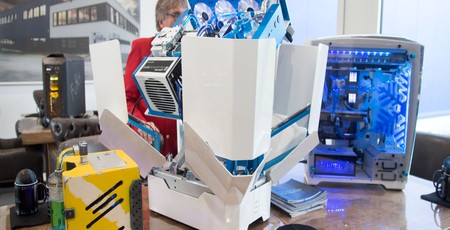 As you may have seen from our previous article, we met a lot of modders when we were in Germany for the Aquatuning HQ opening, and I wanted to delve a little deeper and ask them some questions about Alphacool and Aquatuning. The first person we spoke to is Jeffrey 'Jah Blub' Vos from the Netherlands. He's done some rather nice builds including FuRy, War Table, and Carpenter. bit-tech: What is the inspiration behind your build 'FuRy' that you have here today?

Jeffrey 'Jah Blub' Vos: I took inspiration from the movie Mad Max: Fury Road. I wanted to build something that looked like it would appear in that film.

Aah, I see. At first I thought it might have been the film with the tanks in! What was your biggest obstacle with the build, and how did you overcome it?

Definitely the hardline tubing. This took multiple tries to get right, and it didn't always go to plan, but it worked out in the end.

What do you personally think is the best thing about Alphacool?

For me, there are two main things that Alphacool does great. First, the quality of the components is fantastic, and secondly the great customer support. Do you personally think that aesthetics or performance is the most important when it comes to water-cooling-products? Does Alphacool fulfil these needs, or do you think there could be changes?

Performance and quality are the most important, and Alphacool delivers beyond my expectations.

You have had a walk around the brand new Aquatuning building. What is your favourite part?

The office, it just feels..... right! I can imagine that the staff are very productive due to the way it is laid out and how it all works together.

Do you think modding and liquid-cooling is a big part of the Netherlands scene, or do you find it to be smaller than elsewhere?

I think in the Netherlands there are a number of very good modders, but not enough. The number is growing slowly, though, and there can never be too many! The second person I spoke to was Stefan 'Random Design' Ulrich, a German modder who bought along his Hyperion Data Core mod.

bit-tech: What is the inspiration behind your build that you have here today?

Stefan 'Random Design' Ulrich: I'm a big fan of the Borderlands video games. In particular, the art design and aesthetics caught my interest. With this case, I wanted to create an item that's not taken out of the game but would perfectly fit anywhere in the Borderlands environment. The case is supposed to look like a battery or data cell. I adopted the colour scheme of “Hyperion”, a company placed within the Borderland universe. The used-look, yellow colour, and the characteristic two white stripes make it easily recognizable to fans of the games and, of course, the vault symbol must not be missing .

I love how small it is! What was the biggest problem you had to overcome?

For this build, I set my limit to 25cm length on each side. The biggest issue was incorporating the water-cooling. I made a 3D model before starting, but at the end, it was less space than expected. Inside, I needed to place the hardware in the exact spot to make everything fit together. In addition, the order in which I installed the individual parts was very important. So, I first needed to arrange the electrics, then the water cooling, then the motherboard, and so on. I had to keep track at every step, 'cause if I missed something or screwed anything up, I would have needed to disassemble the entire case.

What do you personally think is the best thing about Alphacool?

From a modder’s point of view, I like the variety of water-cooling products, particularly the number of different water blocks for GPUs and CPUs. Apart from that, the quality is one major factor. None of my builds, when based on Alphacool parts, have ever had issues with leaking or anything else. Even after long-distance transportations, everything was intact, which is quite important when building show mods exhibited around the world. They have to work right after the unwrapping. The Alphacool parts never let me down on this. Do you personally think that aesthetics or performance is the most important when it comes to water-cooling products? Does Alphacool fulfil these needs, or do you think there could be changes?

Personally, I don’t measure the performance of the used parts. It's not important for me if the water temperature is 35 or 38 degrees. For my builds, the aesthetics have priority. The parts need to perfectly match my design ideas and the overall concept. Due to the number of different fittings, water blocks etc., Alphacool definitely fits the needs for my builds.

You have had a walk around the brand new Aquatuning building. What is your favourite part?

There are two parts that got stuck in my brain after visiting the new building. First, the semi-automatical storage system. It was very impressive how quickly and accurately they are able to deal with placed orders. Second, I like the family-friendly atmosphere and structure a lot, especially that there is a room dedicated to the employer’s children. It is not very common these days to bring your children to work. So, if you have any trouble with your daycare, you have the opportunity to take your children with you and they can play with others while you’re working.

You are from the Germany, but I hear you are moving to America. Do you think modding and liquid-cooling is a big part of the German scene or do you think it will be bigger in America?

It will be different for sure. In the German community, liquid-cooling is widely spread but not a necessity. Hard tubing and a decent LED illumination became standard during the last few years. But it could be developed a bit more in the direction of custom-made water tanks like I have noticed in the American scene. It will be quite an experience to join the local American scene as a German. I am very curious to also see their work in person. I’ll also stay in touch with the German community and share all my experiences while moving my workshop and building up business over there.

What would you like to see more of in the German modding scene?

The German “core” scene is taken up by 15 to 20 people who deliver a high quality of work. They also showcase their builds at various conventions and in online forums. However, since I started to take modding seriously, in 2015, there are only a few new people sharing their work with the public. Although the German scene has quite a great output, I would like to see new faces, not only online but especially at the on-site events, presenting their work to others.

The last four builds were created by the Blass bothers more commonly known as 'babetech' or on our forums 'thechoozen'. These guys are great people, and I competed against them in a live modding competition in Taiwan! They are as humble as they are intelligent, and I love talking to them. Unfortunately, they are both rather busy this week, so I wasn't able to get the questions back from them, but I did want to show you the builds they had on display. In Win really like what the Blass brothers do, and both Martin and Stefan love the signature cases. White and blue seem to be a big part of both the H-frame 2.0 and H-Tower builds. Both have custom reservoirs and, of course, Alphacool parts. Another love for the brothers seems to be Guardians of the Galaxy. You have probably seen both of these builds on our forums as well as in our Mod of the Month competitions. I AM GROOT is so cute! 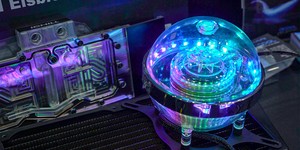 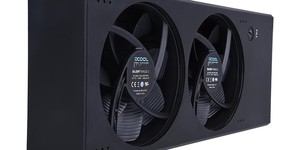 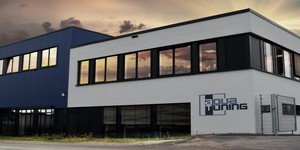