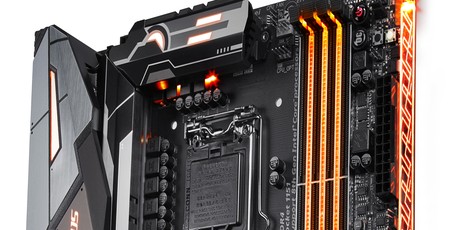 One thing that most manufacturers appear to be doing this time around is to release nearly the full spectrum of boards at launch. We visited Asus recently and had hands on with its new budget-conscious TUF series, its new ROG Strix mini-ITX board, as well as high-end ATX models.

There are some additions and changes to Asus' lineup compared to previous generations too. The TUF series of boards is now firmly a low-cost range, so there's no Sabertooth or Gryphon or large plastic shrouds, but the range still goes through its extended testing so is considered a more affordable option that's maybe seen as a good option for those that want low prices and long-term stability (i.e. those on longer upgrade cycles), with additional peace of mind coming from the TUF series' extensive thermal testing and the like during manufacturing. They're not cheap and cheerful, though, as they do still include premium features such as Asus' Aura RGB lighting and M.2 heatsinks.

Time-aligned signal transfer and Asus OptiMem trace routing technology has boosted memory performance, especially with RGB kits, which can now reach up to 3,400MHz with four DIMMs installed and up to 4,000MHz with regular RAM, whereas its Z270 boards only got to 3,866MHz officially.

For potential ROG Strix Z370-i Gaming mini-ITX owners, you'll be pleased to know that the board now has a USB 2.0 header, which was absent on the Z270 version, so you can now control your AIO liquid coolers without having to use additional cables reaching round to the I/O panel.

Several more boards include Asus' awesome integrated I/O shield such as the Maximus X Hero, and the latter also now includes an M.2 heatsink. The Maximus X Apex has been tweaked too and now looks a little less stripped down with its own I/O shroud, plus it gets a 5Gb LAN port. Meanwhile, the Formula offers a 1.3" OLED dash display, which can show POST status and error messages as well as sensor readings, plus it offers a large M.2 heatsink and two uprated RGB LED headers. 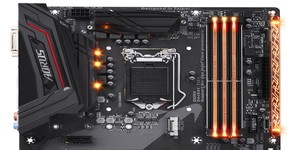