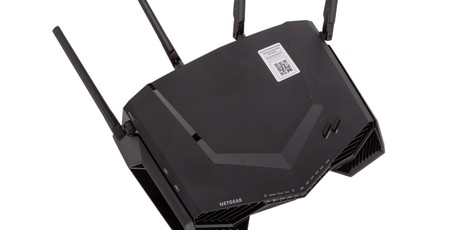 Networking has always been a side of technology that I’ve struggled to muster any passion for. I’m comfortable and even excited researching how SSDs work and looking at GPU architectures, for example, but once talk turns to internet protocols, packets, TCP/IP, and so on, I tend to switch off pretty quickly.

Like most things, this probably stems from childhood. As a kid, I was mercilessly subjected to the horrors of AOL, the Windows ME of ISPs (I also had Windows ME for ages; they were dark years). Why did I have to log into my broadband dial-up style? Where was the “always on” functionality all my friends seemed to be enjoying? And why, why was the internet down again? As a result, that infuriating 'Welcome to AOL' greeting has been tattooed on my brain matter for years, as well as memories of innumerable phone calls with service centre buffoons asking me repeatedly if I had turned the modem off and on again. The point is that I was sick of dealing with network-related issues pretty early on, and have never taken much of a shine to it. Of course, as a tech enthusiast and gamer growing up, I’ve had my fair share of exposure to networking and know more than the Average Joe. I was (and still am) the person house members turned to in periods of Wi-Fi blackout, I’ve done some port forwarding, I’ve forced host advantage on Halo 2 (sorry), and I currently make use of a VPN, but my knowledge of networking is still not as deep as it could or arguably should be, and my interest in networking products like NAS and routers is similarly lacking.

As a result, the idea of a gaming router has always seemed a bit laughable to me, like marketing hype on steroids. Where I live, my desktop PC has been wired into the same Ethernet port of the same router for about four years, and the Wi-Fi throughout the flat has been reliable enough that I’ve not had many complaints – my home network is doing what it needs do, so why would I ever want to jeopardise that? I don’t believe that my ISP-supplied router is the best it could be, but to me a router is just a means to an end; there are just too many factors outside of my control between me and other gamers for me to have ever worried too much about how my own networking hardware might be affecting my game. While I’ve definitely blamed lag for numerous virtual deaths, the truth is that I’m probably just a bit shit at games.

As such, when the Netgear Nighthawk Pro Gaming XR500 “gaming router” was initially offered to me for review, my instinct was to turn it down; why would I spend £250 to upgrade something that I received for free and which was working perfectly fine? I also didn't feel comfortable presenting a review without what I would consider the necessary expertise for this website. Still, some slick presentations from Netgear piqued my interest, so I thought I’d try something a little different and simply record my experience of setting up and using the XR500.