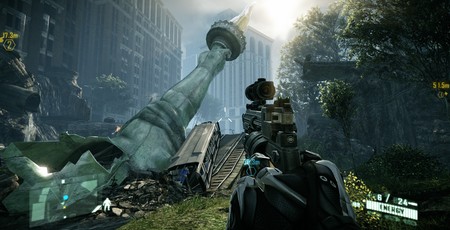 Crysis 2 is generally regarded as the disappointing follow up to Crysis, itself primarily remembered for melting every gaming PC built in the year 2007, over and above any of its qualities as a game. I’ve always thought both these representations to be unfair. The original Crysis was in many ways a prototype for the open world games we enjoy today, demonstrating that games didn’t need to be RPGs to take advantage of explorable terrain. Sure, it was meme-inducingly demanding on hardware of the time, but it was also more than just a technological monster. 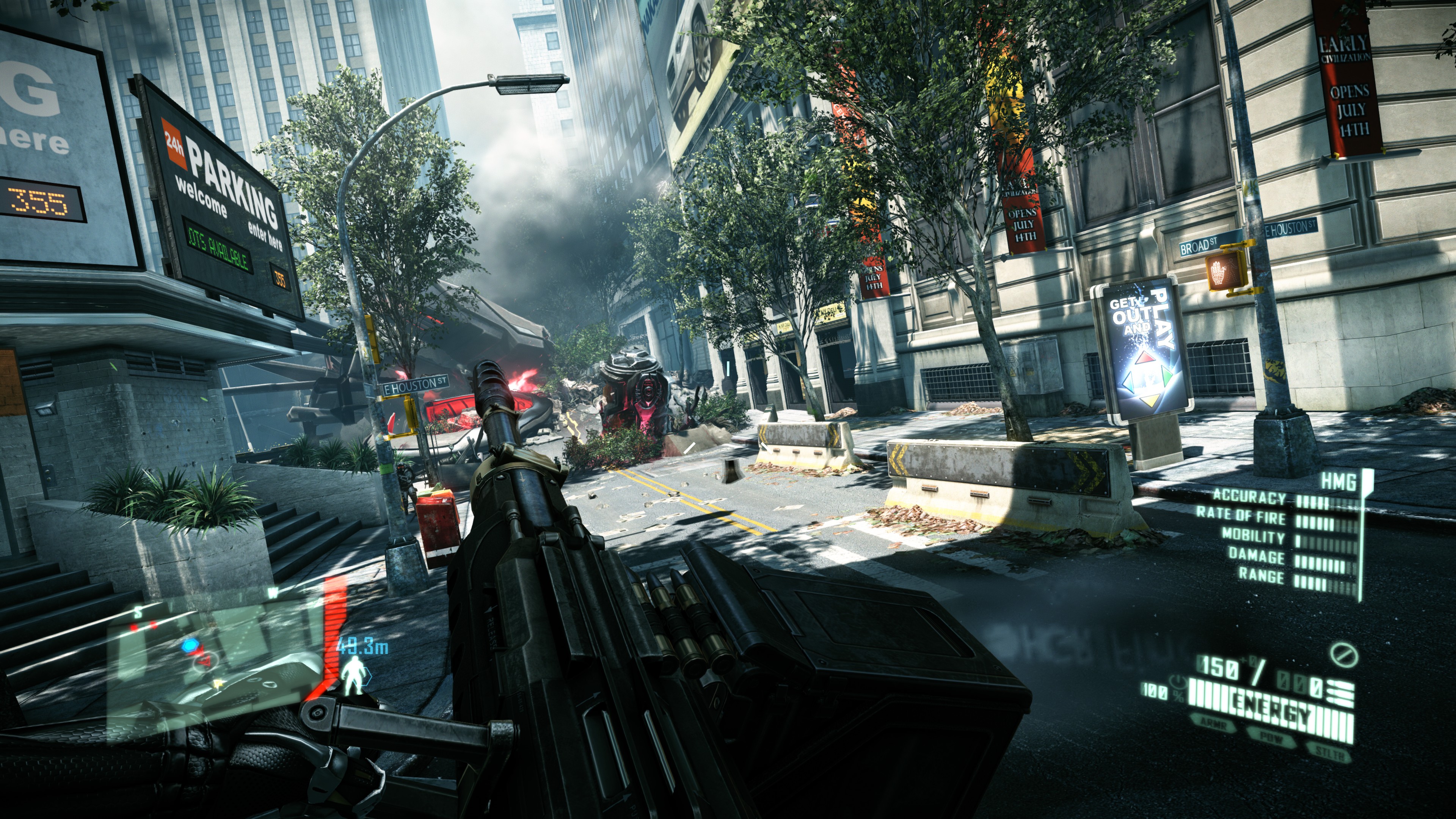 Ironically, Crysis’ technical demands are largely why Crysis 2’s reputation suffered. The sequel removed the two key selling points of the first game. Designed to be a multiplatform launch, Crysis 2 is a far more linear experience than its predecessor, while its own technological achievements were dedicated more to performance and optimisation than further increasing graphical fortitude.

Yet I’ve always believed that Crysis 2 compensates for these perceived shortcomings in other areas. Its sci-fi story offers an intriguing commentary on the nature of FPS protagonists, while its depiction of New York under alien siege is remarkable even today. It also has some fantastic action sequences, despite a frustrating dilution in the player’s abilities compared to the original. 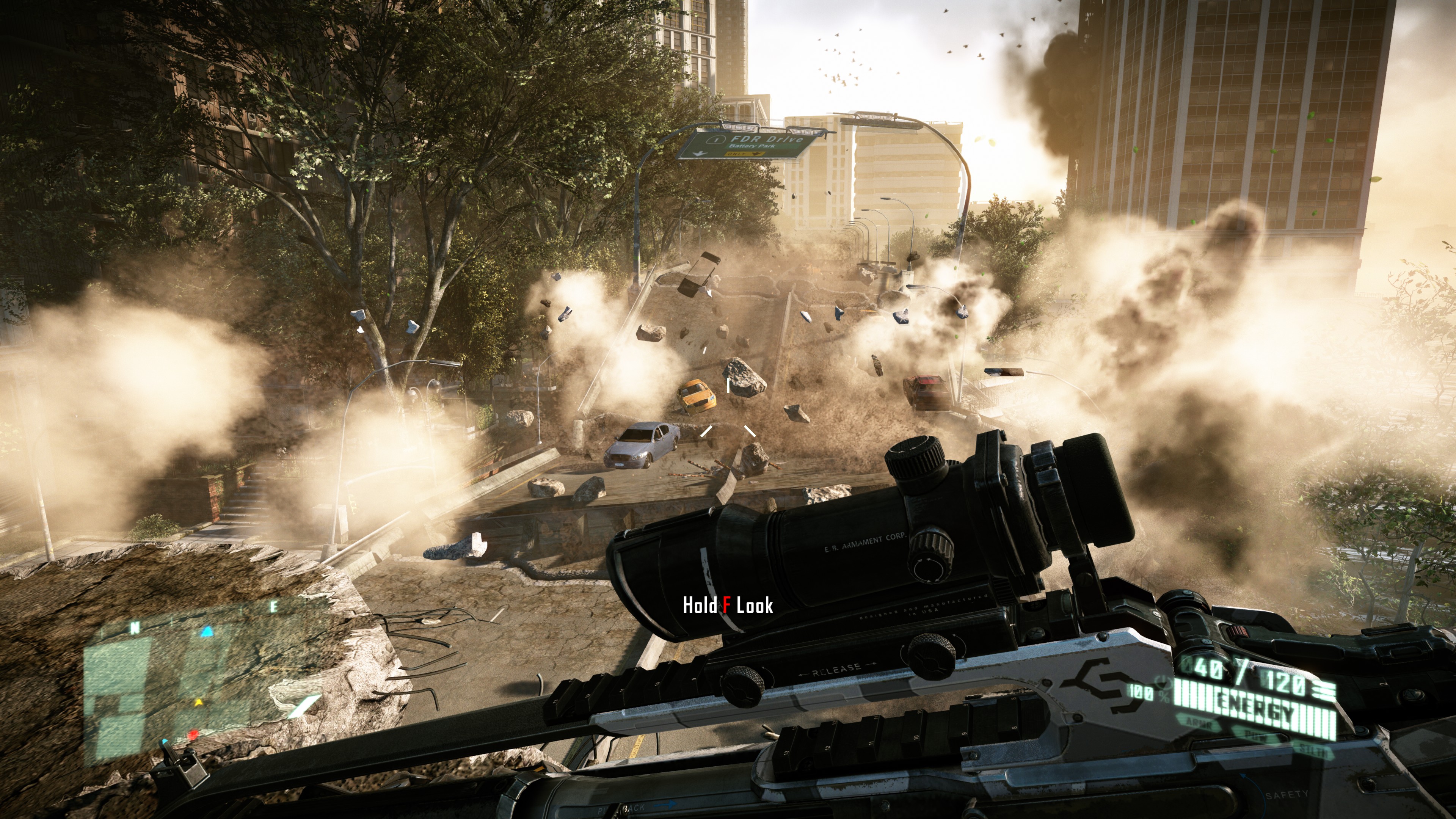 Admittedly, Crysis 2 gets off to a stumbling start, with a knotty introduction that lacks the elegant simplicity of the first game’s parachute jump. You play as Alcatraz, a stupidly nicknamed Marine in a submarine full of stupidly nicknamed Marines, en-route to New York after it has been attacked by the alien menace known as the Ceph. Before you arrive at your destination, however, the sub is attacked. Many of the Marines onboard are killed, while Alcatraz himself is grievously wounded.

Yet Alcatraz’ death is postponed by the intervention of Prophet. The nanosuited squad leader from the original Crysis rescues Alcatraz from a watery grave and dresses him in his own Nanosuit. Then Prophet shoots himself, having contracted a deadly virus that the Ceph brought with them as part of their invasion plan. Before he dies, Prophet leaves Alcatraz with a mission, find and protect a former crynet employee turned conspiracy theorist named Doctor Nathan Gould. 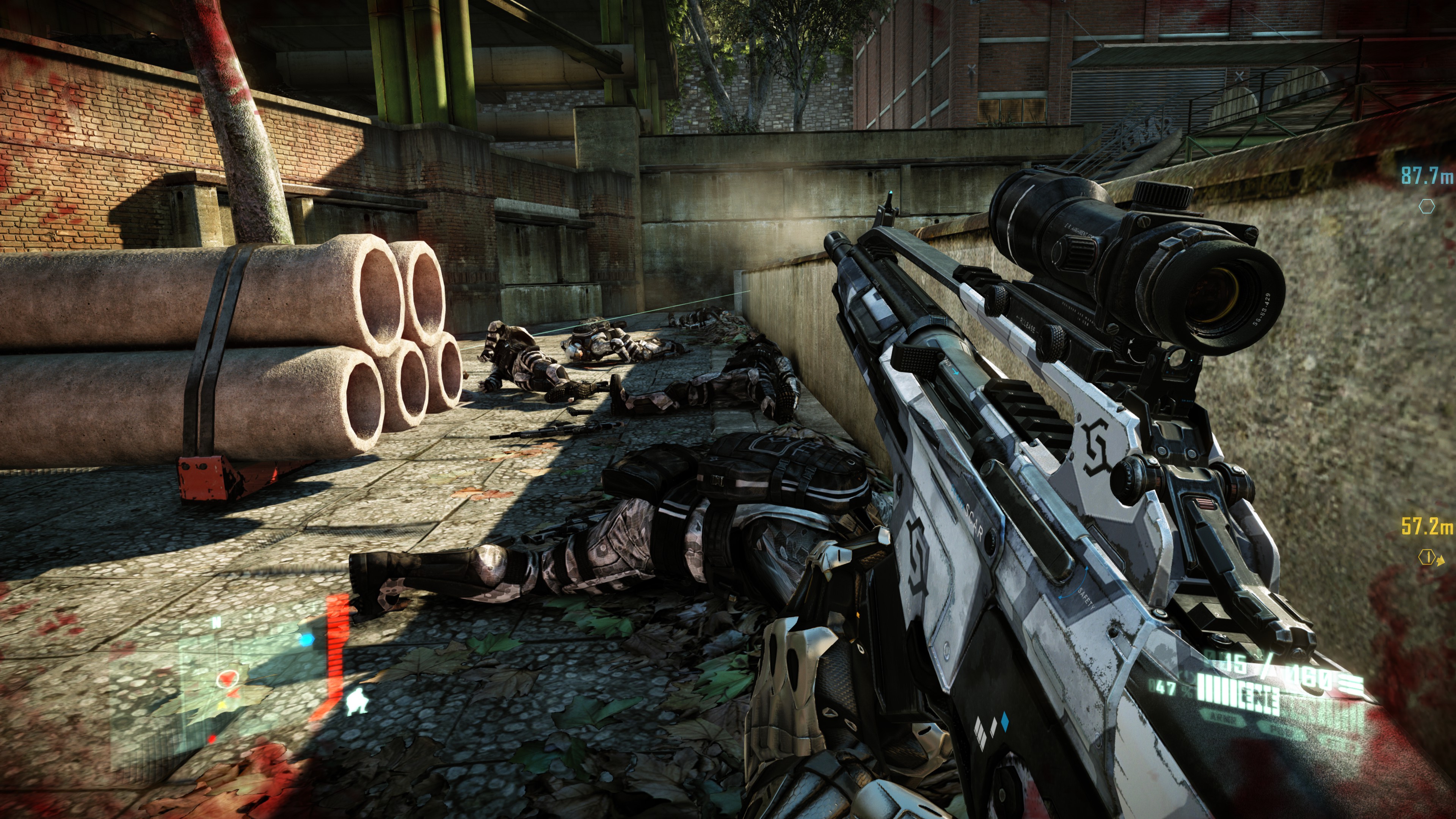 In some ways, Crysis 2 is a weird game to play on the far side of the 2010s. The idea of an online conspiracy theorist having all the answers rather than being a root cause of the world’s problems feels somewhat antiquated, while any game that involves viruses is likely to cause some discomfort smack in the middle of a Pandemic. The scenes in which Alcatraz passes through “quarantined” sections of New York’s underground, complete with civilians lying on gurneys spluttering for breath as they basically dissolve from the inside-out, are particularly hard to sit through.

Hard, but not cheap. Perhaps my favourite element of Crysis 2 is the slow-burn nature of its story, the way it slowly builds and escalates, working hard to earn the spectacle and drama that it depicts. This is most evident in its representation of beleaguered New York. The city is already in trouble when Alcatraz arrives, although as one of your fellow Marines notes, the Statue of Liberty is “still standing.” Once Alcatraz is (nano) suited and booted, however, Crysis 2 proceeds to slowly pull New York apart, peeling the Big Apple one district at a time. 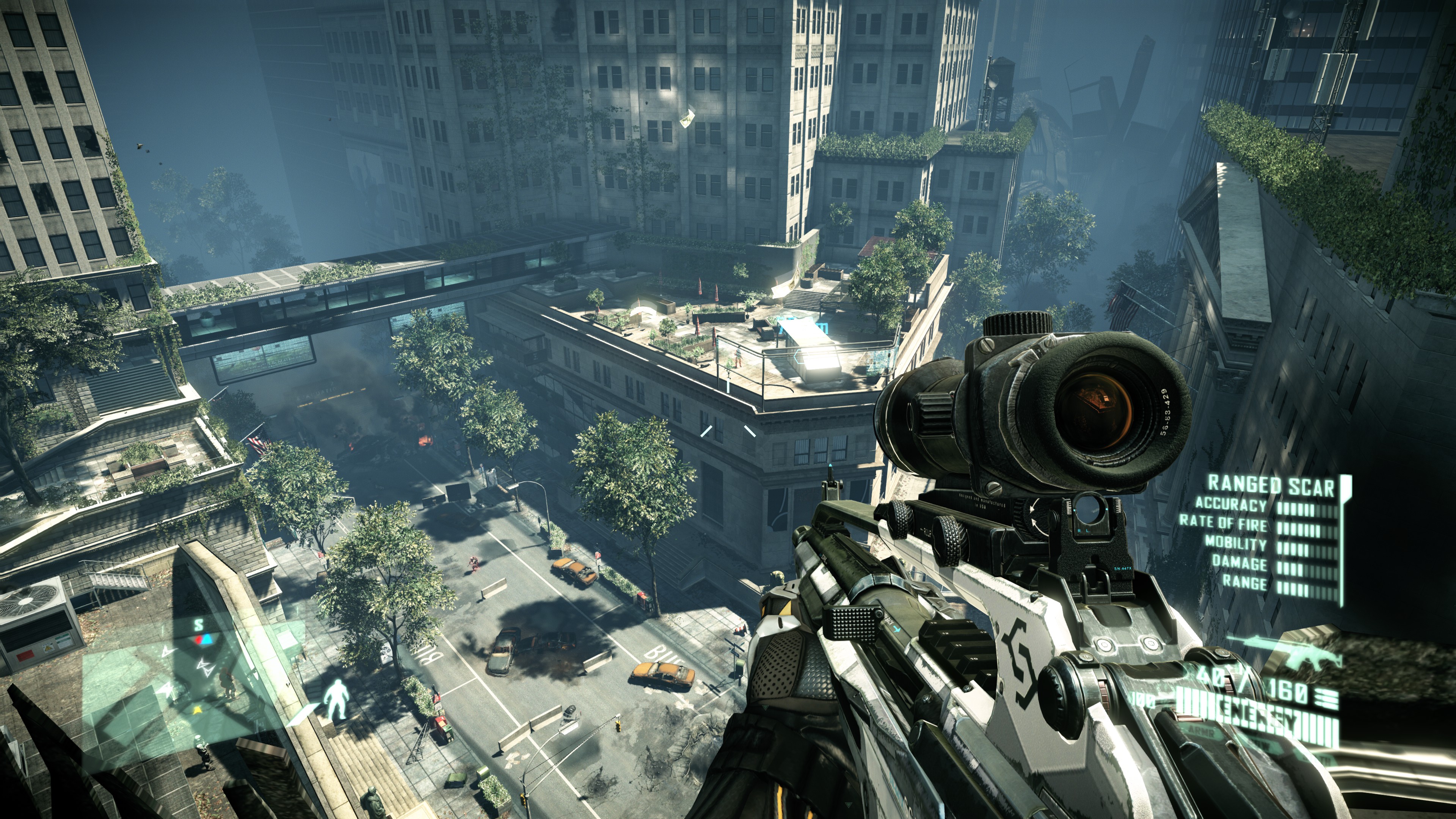 It begins with isolated incidents – an alien spacecraft crashing into a skyscraper, an earthquake collapsing a segment of the FDR highway. As the game progresses, however, you’ll explore vast sinkholes fringed by shattered neighbourhoods, while entire buildings collapse before your eyes. You even partake in some of this destruction, deliberately demolishing a tower block in one mission to slow the alien advance.

Such destructive spectacle is a dime a dozen in Call of Duty games. But Crysis 2 delivers it in a way that effectively communicates the horror of this civilisational collapse, making the spectacle gripping rather than disposable. It provides a palpable understanding of how powerful the Ceph are, and how desperate the U.S Military is to contain them. This comes to a head around the midgame, in a mission where the Marines throw all their weight behind an ambitious plan. Not to attack the Ceph, but to safely evacuate civilians from New York. 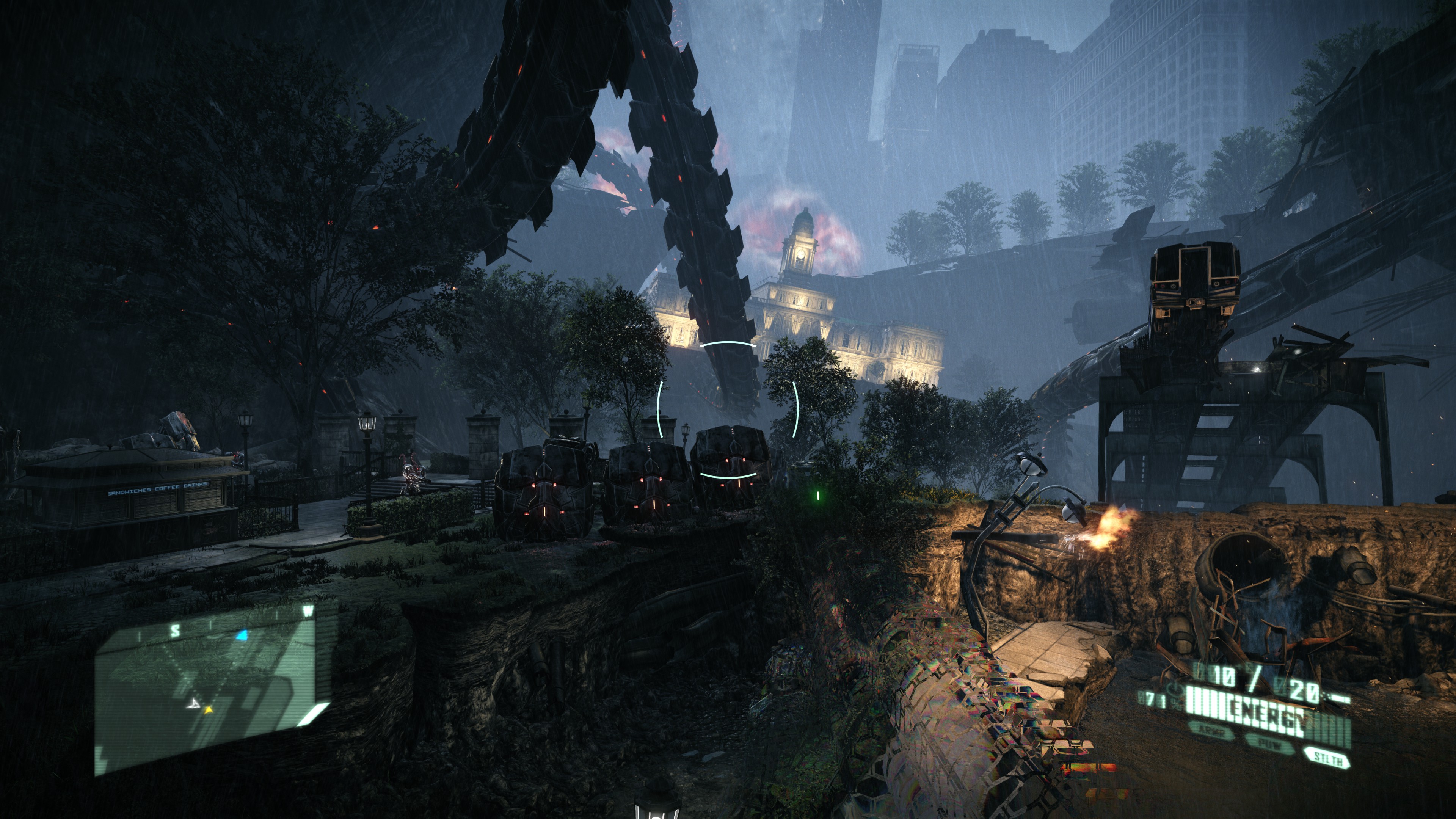 Alongside this more tangible spectacle, there’s a strangeness to Crysis 2 that you don’t often get in big-budget shooters. There are several strands to this, but its best represented by Alcatraz’s own relationship with the nanosuit. In the first game, the Nanosuit was just a neat gimmick, a suit of armour designed to make the main character look cool, as with so many shooters before it. Crysis 2 takes this theme and runs with it, making the suit itself the hero of the story. Not only does the nanosuit keep Alcatraz from dying (the injuries he sustains in the game’s opening would be fatal without it) the suit also synthesises a cure for the alien virus within its subsystems as the player progresses. In other words, Alcatraz is little more than a method of locomotion for it, and by the end his character has been erased entirely, replaced by the nanosuit’s own artificial reconstruction of Prophet.

I think these elements elevate Crysis 2 above being Just Another Shooter. But putting everything else aside, Crysis 2 is also a cracking action game. The weapons and explosives are all superbly designed, especially the fantastic mounted machineguns, which feel like they fire dark matter for the sheer weight in every shot. The armour/cloak binary works well too. I particularly love sneaking up to enemies, quickly decloaking and blasting them with a silenced shotgun, before becoming invisible once more and slipping away before the remaining enemies realise what’s happened. 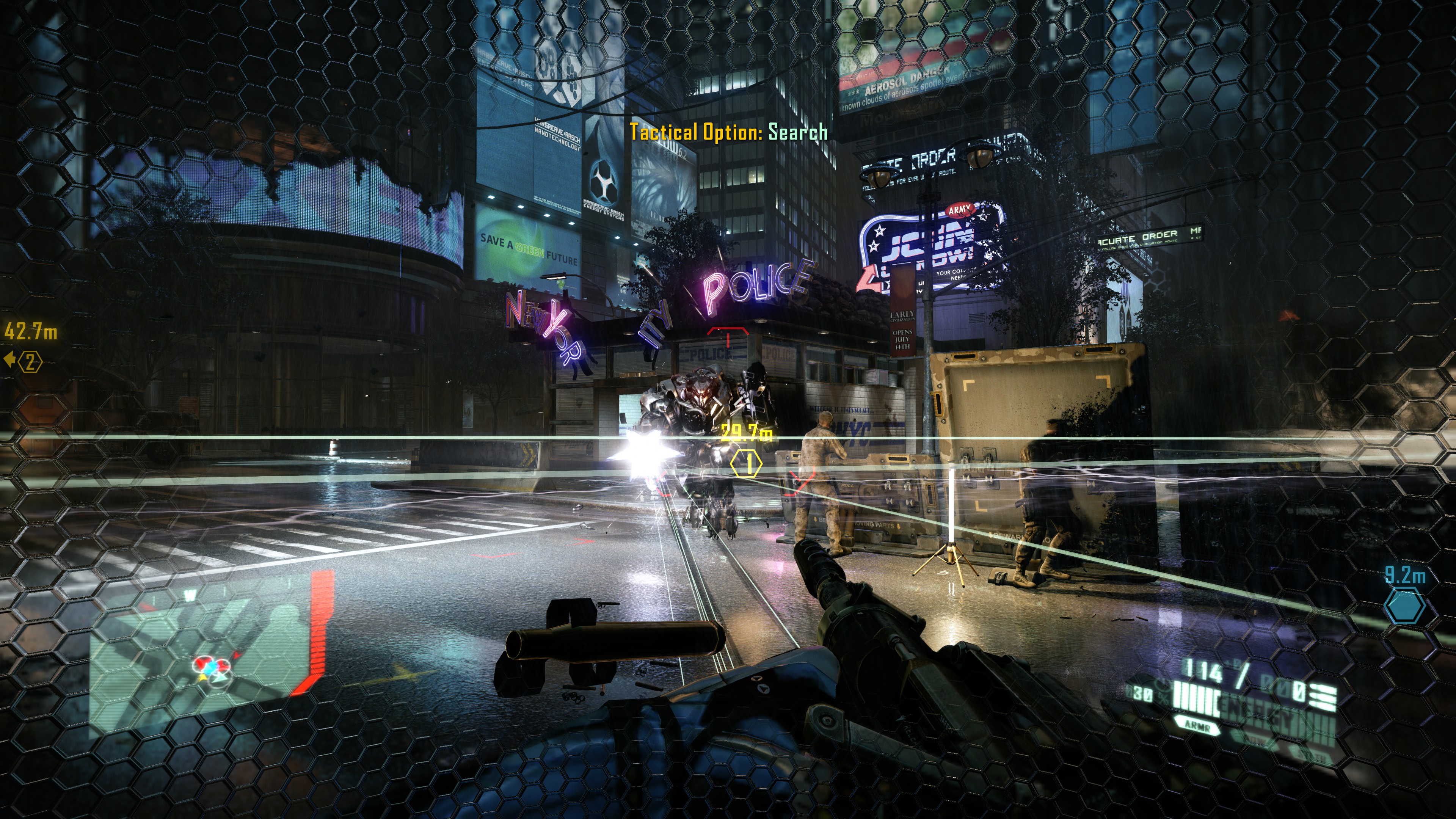 When you tear an HMG off its mounts, stand atop an overturned bus, and let rip into a squad of Ceph footsoldiers while their bullets ping off the nanosuit’s armour, Crysis 2 feels utterly incredible, and I’m more than willing to forgive its lack of breadth in level design. There is one crime it commits that I cannot forgive, however, which is how it ruins the strength and speed elements of the suit. Even in Crysis, the nanosuit felt like it would benefit from being more powerful. Yet Crysis 2 does the opposite, making your sprint slower and your melee attacks weaker. Particularly poorly served is the ability to grab and throw objects and enemies, which was one of the most fun ways to deal with combat situations in Crysis.

The good news is, there are mods for that now. Both the Alcatraz mod and the Ultra Nanosuit mod hugely increase the suit’s general power, bringing it more in line with the original Crysis. With these installed, the stronger elements of Crysis 2 are better allowed to shine. It’ll never be considered a great game, but I believe Crysis 2 to be better FPS than any Call of Duty of the last decade, while it remains a startling portrayal of a city in peril, and a sentient suit’s quest to save it. 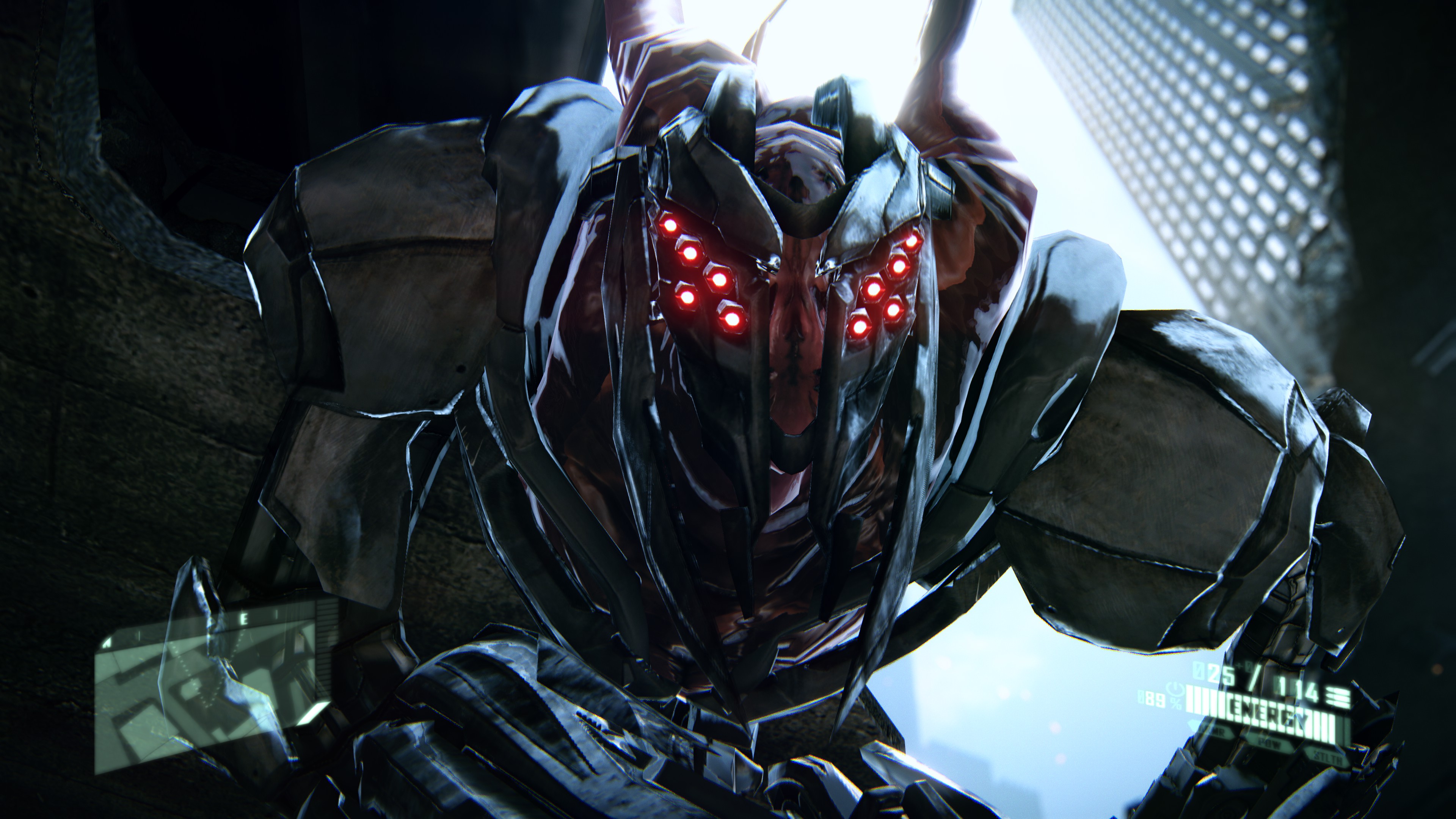