With the current iterations of the two major consoles now well into their respective lifecycles, pricing for basic models is now far cheaper than it once was. Sadly, this isn't the case for PC gaming, especially in the UK where the pound's relatively weak performance of late has driven up the cost of nearly all hardware. As a result, attempting to build a PC that has near price parity to consoles is not the aim here – you'd end up making too many unwanted sacrifices, and your system would be lacking in performance, features, aesthetics, and longevity. Instead, the Affordable All-Rounder aims to be just that: price-conscious but still capable of serving your everyday PC needs and even some more intensive tasks not just now but in years to come. This system will also smash the current consoles out of the water when it comes to the image quality and frame rates it can achieve in games and gives you all the flexibility and upgrade potential of the PC ecosystem as well.


Most of the feedback we received in our last Buyer's Guide related to this system and said that it was too pricey to be considered affordable, and this is a fair shout. The new system's hardware is down from £600 to just over £500 (just under £600 with Windows 10); we wanted it lower, but we truly believe that each piece of hardware is worth what you pay compared to those below it and that this combination of components offers some of the best bang for buck and longevity currently available. Something that just works can be cheaper, but the suggestions here net you a quality 1080p gaming machine with lots of future-proofing for upgrades further down the line. We also give suggestions further down for cutting more cash. We've stuck to an Intel Core i3 CPU but have switched to the newer model, as the Core i3-7100 is the same price as the Core i3-6100. It's only a dual-core, but can run four threads at once. If this system is best suited to your budget, it might be worth waiting for Ryzen 3 CPUs to drop, as these will be the most relevant competitors to Intel's offerings at this end of the market. There's no concrete date for these, however, and Intel is thus still the best choice right now. Update 27/04/16: Forum user Nealieboyee has rightly pointed out that Intel's Pentium G4560 is a very viable alternative CPU. It runs slower, and will cost you a few fps in some games, but the difference won't be a lot, and you'll save yourself £55. This would bring the total system cost down to below £500, and the extra cash could net you a Radeon RX 570 4GB. That said, the extra grunt of the Core i3-7100 will be more beneficial the more powerful your GPU is, so we've left it in the recommendation in recognition of the fact that most people will upgrade their GPU at a later date.

The motherboard is one area where you rightly pointed out that we could save some cash. Modern Intel boards are not cheap, but there's a healthy selection of micro-ATX B250 boards for £65, saving us £30 compared to before. This chipset isn't suitable for overclocking or multi-GPU, but that's of no concern here, and you still get many modern features.

The RAM choice is something hat hasn't changed, but it has gone up in price, unfortunately. Sadly, you'll have to lump this, as 8GB is definitely the minimum for a modern system. If you think you might want to upgrade to 16GB, opt for a motherboard with four DDR4 slots so you can keep using your original sticks.

The GPU is still a GTX 1050 Ti, which we consider the best sub-£150 GPU. It's capable of great 1080p gameplay at high settings. The GTX 1050 is likely to be hampered by its 2GB frame buffer soon enough if not now. On the AMD side, the RX 570 is a decent choice for not a whole lot more cash but is still a bit pricey considering our overall £500 target. Alternatively, the RX 560 is due to launch soon and may well offer good competition to the GTX 1050 Ti, but we won't know for sure until we can test one.

Good entry-level PSUs are inexpensive, with Corsair, Cooler Master, and EVGA all offering 400-450W models for £30 or £35. You don't need more wattage for this system, and you won't get class-leading efficiency or modular cables, but your main priority should be sticking to well known, reliable brands like these - don't be tempted by random Chinese manufacturers, as quality is often poor, and you can even risk your component health and lifespan. Following your feedback, we've ditched the air cooler altogether and instead recommend sticking to the stock Intel cooler. You can easily upgrade it at a later date, after all.

SSD prices have also gone up, so you'll now be paying about £10 more for our recommended choice. You can get 2TB hard drives for the same price, but we make no apologies for sticking to an SSD, as we truly believe they're worth the cost for the responsiveness boost they offer. You could choose a 120GB one, but the £/GB is way lower, and you'll quickly fill it up if you like playing modern games. Either way, bulk storage is cheap, so you can easily make this your first upgrade once you save up a bit more cash, but your operating system and main programs should really be on an SSD.

The case has been swapped for the BitFenix Nova, again following your feedback, which saves us £35. It's a great all-round chassis for just £30, with ease-of-use and features that belie its super low price.

For what we want of this system, we stand by all our choices here, and going for cheaper options in most cases is likely to lead to problems or reduced longevity. For example, less RAM will likely see slowdowns, while a less expensive card risks being a bottleneck much sooner. 120GB we consider too cramped for an OS drive, and we refuse to recommend building a system with only a mechanical hard drive. In fairness, we are targetting smooth frame rates in modern titles at 1080p, and if your demands are lower (lower resolution, or predominantly easy-to-run eSports titles, for example), you could definitely reduce the amount you spend on graphics hardware or choose a smaller SSD.

We also only tend to recommend current generation stuff in this guide. You definitely stand a chance of saving some cash by going on auction sites and hunting for older hardware - modern Intel hardware is pricey and not much faster than stuff that's a few generations old, so this would be where we'd start if you're happy to do this.

Lastly, another option would be to get one of AMD's latest APUs, which combine CPU duties with onboard graphics processing suitable for playing modern games at console-level settings and easily capable of handling eSports titles. The £100 A10-7870K Black Edition looks to be the best bet, and it comes with a cooler. Pair that with an FM2+ motherboard and 8GB of 2,133MHz DDR3 for about £130 combined, and you're now looking at roughly £370 in hardware costs (no graphics card or cooler needed), keeping the overall budget well below £500 when Windows is factored in.

You can go even cheaper than this, of course, but then you're rapidly heading towards hardware that will show its age much quicker – you still want a system to be proud of and that can be upgraded easily in the future. 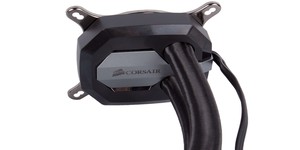