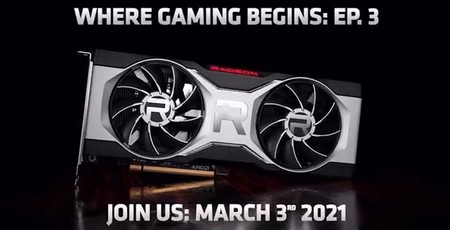 AMD has published a teaser for Where Gaming Begins Episode 3 via its official Radeon RX Twitter account. The blurb and accompanying GIF animation doesn’t give a lot away except for confirming it will use this platform to "reveal the latest addition to the @AMD  Radeon RX 6000 graphics family," and there will be a lower-tier twin fan reference design at launch. This is obviously the widely rumoured and leaked RX 6700 XT. However, the singular 'addition' mentioned implies that we won't get to see a reveal/launch of the Radeon RX 6700 (non-XT) at this time – or I could be reading between the lines too obsessively…

In the top image of this article, and our headline, you can see that Where Gaming Begins Episode 3 is scheduled for a next Wednesday at 11am ET (4pm UK time). It may be that AMD has prepared this date deliberately to sap excitement from the official launch of the Nvidia GeForce RTX 3060 12GB (later today).

The AMD event announcement Tweet animation shows a smaller twin fan reference design this time around. It isn't an ugly design, and as reviewers didn't find fault with the similar style triple fan reference coolers on the RX 6800 / XT models there is no reason to suspect that this dual-fan shroud is not adequate for the smaller GPU. The new AMD Radeon RX 6000 cards are expected to go toe-to-toe with the Nvidia GeForce RTX 3060 Ti and RTX 3060 12GB. Hopefully they will have acceptable levels of availability.