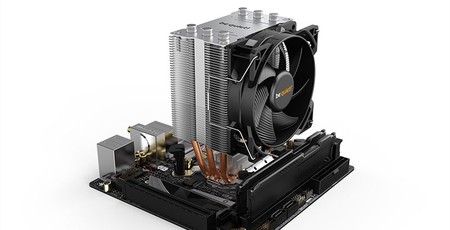 On paper the new Pure Rock Slim 2 appears to be very similar to the previous model. Be quiet! hasn't gone into any comparison details or described specifically why the new model would be a superior choice, but digging through previous retail listings (the product page for the older model has disappeared), shows the following differences; the TDP cooling rating has increased from 120 to 130W, be quiet! has optimised its AMD mountings, and the cooler comes with a Pure Wings 2 92mm PWM fan strapped on where previously the fan design was not mentioned by be quiet!

Official highlights of the Pure Rock Slim 2 are as follows:

Other important specs for would-be buyers include the size (L82 x W97 x H135mm) and weight (385g). Moreover, buyers might be pleased with the convenience of finding that a thermal paste has already been applied (or annoyed that they have to clean it off to use their own preferred paste). Alongside the above CPU air cooler, be quiet! launched two M.2 SSD heatsink designs, the M.2 SSD Cooler MC1 and MC1 Pro. These have the same low-key matte black ridged design, but the Pro model has a built-in heatpipe.