Shadow of the Colossus map mod for HL2

Mark this down as one of the slickest game mods that we've seen for quite a while.

Many of you, we are sure, will be familiar with Shadow of the Colossus, the PS2 game that is the follow-up to ICO. It had rave reviews when it was released last year, and is the kind of game that's worth picking up the console just to play.

Well, someone made a Counter-Strike map based on it.

The map, DE_Wanda, looks absolutely stunning. The creator, Soenke c. &quot;Warby&quot; Seidel, has put together a stunning array of super-high-res textures which make the map look incredible. The BSP is 160MB, pretty much guaranteeing that no internet servers are going to run it, but the centrepiece of the map makes it worth downloading. It's a Colossus fighting with a Combine walker, statuesque. The HDR lighting and the scenery is just mind-blowing.

You can see some screenshots of the map, and grab the BSP for yourself, over here. Give it a whirl on your own machine, then let us know your thoughts over in the forums. 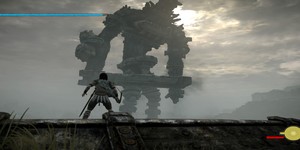 Do LAN centres in the UK still work considering the mass adoption of broadband? Is playing face to face still better than behind a PC the other end of the country?