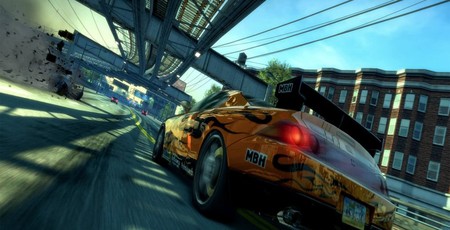 Electronic Arts has announced it is to relaunch its open-world drive-'em-up Burnout Paradise as a new remastered edition capable of Ultra HD rendering on the PlayStation 4 Pro and Xbox One X.

Released back in 2008 and described as 'by far the most open and interesting Burnout game we’ve ever played', the original release of Burnout Paradise was a success across consoles and, a year later, Windows PCs. Now, Electronic Arts is back for another crack of the whip with Burnout Paradise Remastered, which it hints is only the first of a planned series of re-releases for popular franchises.

'When people think of Criterion Games, they often remember the Burnout franchise and for good reason. What we created 10 years ago we feel is still fun and unique to this day in the gaming industry,' says Matt Webster, general manager of developer Criterion Games. 'Burnout Paradise is an arcade racer built to provide players the thrill of racing with their friends, in a free form way that was both seamless and immersive, but also a little crazy with all the different stunts and crashes players could pull off. With the release of this remaster, we're able to share this action-packed ride with a whole new generation of players.'

Burnout Paradise Remastered will launch, EA has confirmed, on PlayStation 4 and Xbox One on March 16th 2018. Those playing on the Xbox One X and PlayStation 4 Pro consoles, meanwhile, will get Ultra HD (consumer 4K) support at a target 60 frames per second. A Windows release is also planned, though with only a vague promise that it will arrive some time later in the year.

All versions of Burnout Paradise Remastered will include the original base game and all eight downloadable content packs released, bar the so-called 'Time Savers Packs' which unlocked all base vehicles in the game for a one-off payment. EA has not yet confirmed whether the Time Savers Packs will be available to purchase in the Remastered re-release.

More information is available on the game's official website.