The Internet Archive has made 900 classic arcade games available to play for free in a browser.

The project has come about through the efforts of emulation developer Jason Scott working with JSMESS, otherwsie known as JavaScript Mess, a multiplatform emulator in JavaScript.

’I decided to futz around with our build environment (which it must be absolutely stressed, the other JSMESS team members built, not me), just to ask the question “and how hard would it be to build arcade games anyway?” It turned out to be easy. Very, very easy,’ said Scott writing on his personal blog.

Scott hopes that the project will introduce several lesser known classics to people and allow the discovery of arcade games that maybe didn’t get such a successful run in their heyday.

’My hope is that a handful, a probably tiny percentage, will begin plotting out ways to use this stuff in research, in writing, and remixing these old games into understanding their contexts,’ said Scott.

The Internet Arcade is accessible from any modern browser and apparently runs the fastest on Firefox. Scott warns that some games are glitchy on modern systems, in particular vector based games. Also, some arcade games required esoteric controls which do not translate well to a keyboard. 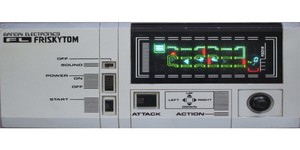 Aims to protect its collections.