Designed to replace the existing Shield console in the market, Nvidia's new design is distinguished by the inclusion of a 'TV' suffix - a nod, it seems, to the company's desire to push the device as a high-end media streamer as well as a games console. Available, as before, in Shield TV and Shield TV Pro variants, both devices include the same central specs: Its heart is an Nvidia Tegra X1 system-on-chip processor linked to 3GB of RAM, while an HDMI 2.0b port provides connectivity for Ultra HD resolution output at 60 frames per second and with high dynamic range (HDR) support.

Both models also include the same network support - dual-band 802.11ac with 2x2 MIMO support, Bluetooth 4.1, and Bluetooth Low Energy (BLE) on the wireless side and gigabit Ethernet for a wired connection - and come with a bundled Shield Controller and Shield Remote. Interestingly, both of these accessories now come complete with an integrated microphone, designed to operate with the embedded voice-recognition system to search for content and control playback. Additionally, the operating system has been updated to Android 7.0 Nougat, featuring Google's official Android TV and Cast functionality - though, oddly, Nvidia's official merchandising guidelines state quite clearly that sellers are not to use the word Android in the product title. The only distinction between the two, bar the packaging: 16GB of storage on the Shield TV and 500GB on the Shield TV Pro.

The new console launches alongside the mainstream release of GeForce Now, Nvidia's cloud-powered game streaming service previously leaked as GeForce PC in the cloud. As the original name suggests, GeForce Now allows users to stream game content rendered on powerful cloud servers to their far weedier local machine. Unlike rival services, however, GeForce Now allows users to take near-complete control of the pseudo-rig on the other end of the network and install their own games from services including but not limited to Steam, Origin, Uplay, and GOG.

More information on the refreshed GeForce Now service is available from the official website, while the Shield TV and Shield TV Pro are due to launch on January 16th and January 30th respectively, with pre-orders available now from Nvidia's website priced at £189.99 and £279.99 respectively. 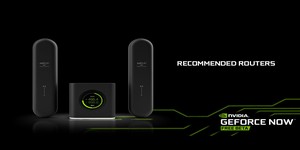 No word on specs, though.