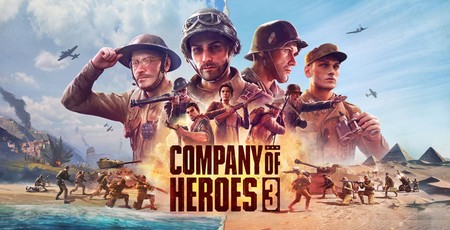 Relic Entertainment and Sega have blitzed gamers with a deluge of Company of Heroes 3 information. After eight long years, the third game in the series has finally been announced – and it is scheduled for release on PC in late 2022. Not content with a bit of a tease, the developers have published plenty of information about the new game in the shape of multiple blog/forum posts, several images and videos, as well as releasing a free playable Company of Heroes 3 pre-alpha release (single player) worldwide. Company of Heroes 3 is a strategy war game set in the Mediterranean area in the summer of 1943. This coincides with the Allies Operation Husky, an invasion of and northwards thrust through Italy. Your role as the commander with mouse and keyboard will be familiar in some ways - using the core tactical Company of Heroes 1 gameplay methods - but things have been changed up with a couple of important changes, as well as expansions to multiple game aspects – maps, factions, graphical fidelity, and more.

The first major change you will face is the 'Dynamic Campaign Map', which Relic explains as a "non-linear, decision-filled dynamic campaign map," providing more choice, diverse campaign experiences, and unpredictable missions – as you make the major strategic choices to shape your campaign – and this will be increasingly important as you advance. Secondly, Relic is introducing a 'full tactical pause' feature, as players of Sega Total War series games will be familiar with. This should let players step back and strategize better in the heated battles of their single player campaigns.

Single player, single and co-op player skirmishes, and competitive multiplayer modes are planned – and more modes are promised for future reveals. If you want to read more, head on over to the Game Overview blog post. Relic / Sega also promise plenty of updates between now and release via the Steam store page for the game.

To play the free pre-alpha game release (open for the next three weeks) you have to sign-up to join the COH-Development Program, and then you will be able to link your account and grab the demo release via Steam. The same account will give you access to design documents, art drops, discussions with the devs, and more. Incidentally, the previous Company of Heroes games are currently on sale at Steam, with pretty big discounts.