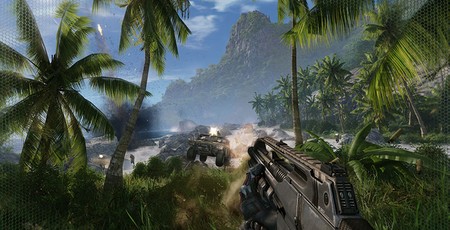 Crytek updated Crysis Remastered on Friday with a free update meaning that Nvidia's DLSS would be available on appropriate PC systems. It trumpeted the release on its Twitter feed, and in a blog post, teasing gamers with the promise of "dramatically improved performance, making Crysis Remastered look and play even better".

In case you need a refresher, Nvidia DLSS tech Deep Learning and AI enhanced rendering to produce sharp stable moving imagery from lower res inputs, providing a rendering performance boost at a quality beyond simpler game resolution scaling options can provide. According to Crytek's own testing DLSS in Crysis Remastered could boost your frame rates by up to 40 per cent, with a compatible graphics card. As well as the DLSS update, Crytek implemented "numerous bug fixes and general enhancements". In its blog post it called out the addition of original controls, multithread optimisations, and the addition of the Ascension level, as reasons to be cheerful about this update.

All the above sounds well and good but this weekend Crytek had to quickly patch its patch. On Sunday the developer Tweeted that it had made two major changes via a hotfix, as follows:

If you are an Xbox or PlayStation gamer looking on in envy, Crytek promises some "amazing additions coming very soon." I'm not going to predict these console tweaks but they aren't, of course, going to be anything to do with DLSS-type technology unless AMD has a big surprise for us too.