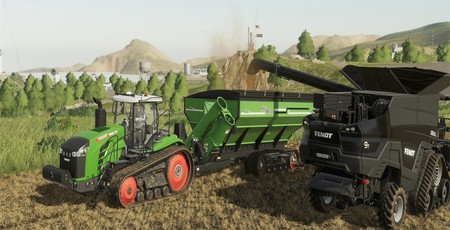 Giants Software has announced that it is leaping into the world of competitive virtual farming with both feet and a tractor, following up its 2018 Farming Simulator Championship with a new league boasting a €250,000 prize pool.

One of a range of surprisingly-popular job simulator titles, Farming Simulator does exactly what it says on the tin: Players are given the job of running a working farm, with all the hardware that entails, and while some may have visions of a life of simulated bucolic peace it turns out that there's a competitive side to the concept - and it's one developer Giants Software exploited in 2018 with its first-ever Farming Simulator Championship.

A year later, and the company thinks the concept has legs: It has announced that it is bringing competitive farming back for a second go-around, this time as a full Farming Simulator League with an impressive €250,000 prize pool.

'"We have a unique opportunity: competitive farming is something people enjoy for years now, but it hasn’t been done in esports so far,' explains Giants' chief executive and esports division manager Christian Ammann. 'We have lots of esports enthusiasts in our company who can’t wait to show the world that farming can indeed be fun and competitive at the same time. We believe we found the right mix of real farming and fun to play game elements to ensure everyone will find it entertaining.'

The league will see ten tournaments, all played using the company's latest Farming Simulator 19 title, take place across Europe; from these, the best teams will go head-to-head for a jackpot pool of €100,000, while the remaining €150,000 in the budget will be provided to winners of individual tournaments. Each tournament will, Giants has promised, 'stand true to its roots in farming and combine real field work like harvesting with fun and challenging game elements' and include a new 3v3 game mode.

Giants Software has not yet announced a launch date for the first tournament.

Surgeon Simulator developer Bossa Studios has announced its newest title, I am Bread.