HTC has announced the launch of an internal games studio, dubbed Vive Studios, in an effort to reduce its reliance on third parties for the success of its virtual reality platform.

Announced late last night, HTC's Vive Studios is set to be responsible for both developing in-house and publishing third-party software designed around the company's virtual reality headset. This, it must be noted, represents a shift from the company's previous position of relying upon launch partner Valve and its Steam VR platform for content.

'We're excited to formally unveil Vive Studios as a new pillar in HTC's initiative to drive persistent growth for VR,' claimed Joel Breton, vice president of content at HTC Vive, of the new division. 'Vive Studios' aim is to nurture and discover development talent and help create content that will continually push the boundaries of the kinds of experiences VR can deliver. The VR ecosystem needs a persistent flow of exciting experiences and AAA content that can help grow our audience.'

The company's plan is to run Vive Studios in a similar manner to console publishing houses: It will produce first-party content developed through internal talent as well as fund and publish VR content from third parties, potentially in return for timed or complete exclusivity agreements that would keep the software from the clutches of rival Oculus VR. HTC is not just concentrating on games, either, with Vive Studios to look at publishing everything from educational materials to tools aimed at markets from design to real estate.

Vive Studios' first product, though, is unsurprisingly a game, developed by 2 Bears Studios, now an in-house team made up of former staffers from Microsoft Games Studios, Rockstar, and Midway. 'Arcade Saga delivers exciting and deep VR game play painted with strokes from classic arcade games that people will instantly remember,' claimed J. Epps, creative director at 2 Bears Studios, of his group's creation. 'By combining an homage to familiar games with our backstory putting players in the role of a CPU fighting humans, Arcade Saga is the VR equivalent of not just walking through an arcade but getting inside the game.'

The game is available to HTC Vive owners now via Steam, priced at £22.99. It is also being sold through HTC's own Viveport distribution channel, which is currently a Chinese exclusive. A promotional video for the game is reproduced below. 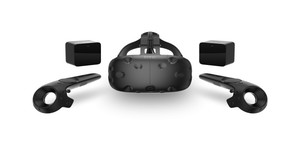 Builds on top of Vulkan.