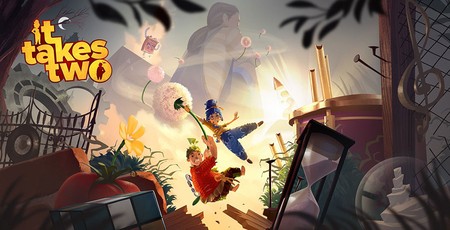 It Takes Two was released on Friday and this title might be the surprise PC gaming hit of 2021. This charming action-adventure puzzling game from Hazelight champions co-op gameplay, has garnered excellent reviews and sits atop the Steam global top sellers list. It is priced at £34.99 in the UK.

It might not surprise readers to hear that It Takes Two is from the same creators as other recent duo-themed titles A Way Out and Brothers: A Tale of Two Sons. The story this time round is as follows:

"Magically turned into dolls by their daughter Rose, Cody and May are challenged by a cheesy self-help book on love – Dr. Hakim – to fix their broken relationship. Innovative gameplay, emotional storytelling, and laugh-out-loud moments merge in this genre-bending platform adventure made exclusively for co-op."

So how do you find a partner to play with, as it sounds pretty essential rather than a choice? The developers have implemented online co-op and matchmaking, you can team up with a friend who won't need to shell-out for the game thanks to the 'Friend's Pass' system (needs to be on same gaming platform), or you can even couch-co-op thanks to the split screen mode the game provides as an option. The game has been very warmly welcomed across all the platforms where it has become available. On PC, for example it has a Metacritic score of 89, and a user score of 9.3. The celebratory reviews and end-user buzz has made this game into a big hit already. As per our headline the game has quickly grabbed the #1 spot in the Steam global top seller list, an enviable position to be sure. While we are on the topic of reviews and Steam, on this platform it has 'overwhelmingly positive' reviews. It Takes Two was released for PlayStation 5, PlayStation 4, Xbox Series X/S, Xbox One, and PC via Steam and EA's Origin on Friday. If you buy it on the older gen consoles you will be able to upgrade to newer gen for free at a later date.