Rockstar Studios has confirmed a PC version of LA Noire is in the works, announcing a spate of extra features - though without setting a release date.

'The PC version of L.A. Noire was developed by Rockstar Leeds,' says the official release. 'It will run on a wide range of PCs and feature customization, including keyboard remapping and gamepad functionality to both optimize and customize the performance and user experience.'

'Along with increased fidelity and improved graphical enhancements, the PC version will feature 3D support for an even greater sense of interaction and immersion within a painstakingly detailed 1940s Los Angeles.'

Rockstar describes LA Noire as 'unique blend of story, action and crime solving'. We describe it as '[lacking] enough actual game underneath the lavish setting and interactive movies to elevate [it] to the heights of GTA.'

Read our LA Noire Xbox 360 review for more info, check the video below and then let us know your thoughts in the forums. 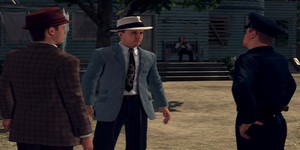