Valve has officially opened orders its Steam Controller gamepad, designed for use with any and all PC games, ahead of a simultaneous launch alongside the Steam Link micro-console.

Previously locked in development hell and undergoing numerous revisions - including the loss of an innovative central display screen - the Steam Controller features twin concave touch-pads in place of the usual thumb-sticks common to console controls. Using these, Valve has long claimed, it's possible to play not just controller-friendly titles but also games designed for keyboard and mouse use.

Triggers at the upper edge of the controller are firearm-style two-stage: a first stage provides analogue input, while a second stage provides a digital click. Powered by AA batteries, the controller is claimed to offer a five metre range and 80 hours of wireless play. The device is launching later this year, with a 'limited quantity' shipping on the 16th of October ahead of the official release.

The release of the Steam Controller is due to occur alongside the Steam Link micro-console, designed to provide a low-power, low-cost termination device for the Steam In-Home Streaming feature. The controller is priced at £39.99, as is the Steam Link; a two-pack saves absolutely no money at all, bundling both devices for £79.98.

The Steam Controller and Steam Link are available to pre-order now via, unsurprisingly, Steam, while the benefits of the controller are demonstrated in the promotional video reproduced below. 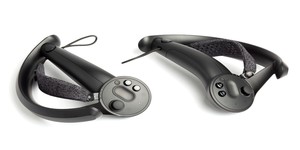