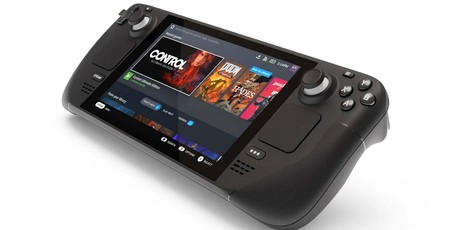 Valve has unveiled the Steam Deck handheld gaming PC. The new device, which Valve boasts to be "the most gaming power you have ever held," has a Nintendo Switch-alike form factor, but boasts (mainly) familiar PC-style specs, while running SteamOS 3.0 (Linux) so you will be able to play most of your Steam library without a hitch.

Let us start by looking at the key internal specs. The processor in this handheld is a previously unseen 4-15W AMD APU, combining a 4C/8T Zen 2 CPU with eight RDNA 2 compute units (512SPs). 16 GB of LPDDR5 RAM comes as standard, but there are three Steam Deck models differentiated by storage type/capacity – all come with fast microSD card expandability. While we are on the topic of storage, I might as well outline the pricing, which is tied to this spec. The base 64GB eMMC model will retail at US$399, the 256 and 512GB NVMe SSD models cost $529, and $649 respectively. If there is any obvious weak point in a handheld/portable, that by its nature features compromises, it is that for playing locally stored Steam games, the storage capacities are low / with considerable expense to spec-up.

Another key spec for any portable is the screen. The Steam Deck is built around a 7-inch IPS touch screen with 1280 x 800 pixels. The screen can go as bright as 400nits, but not refresh any faster than 60Hz. I don't know if it will support AMD tech light FreeSync, but games should be able to be accelerated with FSR where it is implemented. Gaming on this 800p screen seems to be a good compromise between image sharpness and battery usage. The device is expected to run for 2 to 8 hours of gameplay time, aiming at 30fps performance will get you nearer to the longer duration. Valve's Steam Deck seems to have plenty of control options built-in. As well as the aforementioned touch screen you have lots of buttons (front, shoulder, back), as well as twin thumb sticks, and twin touch pads – which appear to use similar tech to the old Steam Controller with haptic feedback and pressure sensitivity. There aren't many ports though – just a USB-C and microSD slot. Thankfully that USB-C is very flexible, supporting data, video, power, and Valve has a dock ready, bristling with handy ports for big screen gaming and productivity, but we just don't know its pricing yet. For the full tech specs of the Steam Deck please visit the official specs page.

Initial availability is from December, but pre-orders open soon. Regions earmarked for the first batch of Steam Decks are; the US, EU, UK, and Canada. For me, perhaps Valve is a little behind the times, as games streaming services have started to get their act together enough to make general purpose tablets and smartphones increasingly viable for semi-serious gaming on smaller screens. Are any Bit-Tech readers interested enough to consider buying a Steam Deck?