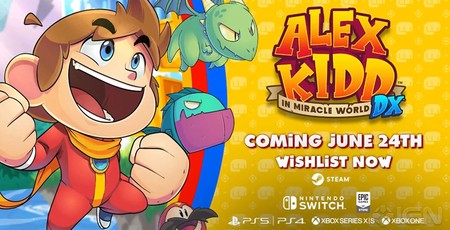 Classic platformer hero Alex Kidd is heading to PCs and modern games consoles this summer. Sega has thoroughly revamped the original 1986 title with "striking new art and tighter, more fluid controls," but if all the new stuff is too much for you, you can always switch to 'Classic Mode' for a near-authentic Master System original game experience. Alex Kidd in Miracle World DX will have you smashing rocks, collecting coins, and tackling bosses once again. The enhanced remake includes all the original levels as well as brand-new levels which expand the game lore. Add to this a generous ladling of new animations, graphical detail and gameplay improvements – as befits a 2021 platformer game.

Sega says that it has included all the original classic boss fights in this remake as well as "legendary rock, paper scissors battles with Boss Rush Mode". There are also alternative boss fights with new and improved fight mechanics with more intuitive combat, according to Sega. The developers haven't neglected the chance to upgrade the audio, providing reimagined music tracks as well as remastered tracks from the original classic game.

As mentioned in the intro, if all the modernity is/becomes too much for you, you can easily switch to Classic Mode. Here you can experience the original Master System game, with boss fights, dialogue, levels and functions claimed to be identical to the original. Checking the comparison below, there is something to be said for the cartoony simplicity and vibrancy of the original graphics assets. PC recommended specs are predictably low. You will just need Windows 7 or newer, with 4GB of RAM, and 'any' processor, with Intel HD graphics 4000 or newer, for 720p gameplay.

Alex Kidd in Miracle World DX arrives on PC Steam, PlayStation 4, PS5, Xbox One, and Xbox Series X/S on 24th June. I don't have UK pricing, but it will cost US$20 state side.