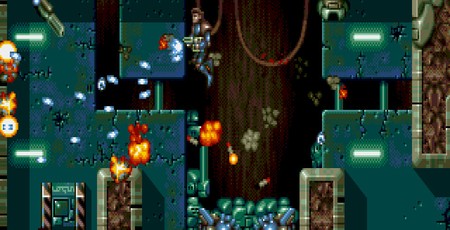 DICE co-founder Fredrik Liljegren has announced that Hardcore, an unreleased platformer from the company's 16-bit era, is heading to modern platforms in partnership with developer Strictly Limited - and it's using original Sega hardware to do so.

First unveiled by developer Digital Illusions, the company that would later become DICE, in 1994 with the promise it was 99 percent complete, Hardcore - a working title - was a run-and-gun platformer planned for launch on the Sega Mega Drive, Mega CD, and Commodore Amiga, three of the four big-hitters of the 16-bit console era. Its launch, however, never came: Publisher Psygnosis, which would later become Sony's Studio Liverpool, pulled out at the last minute over concerns that the impending launch of the PlayStation would immediately kill last-gen sales.

Now, more than two decades after the game disappeared, DICE's long-lost title is heading to consoles courtesy developer Strictly Limited Games, itself formed by DICE co-founder Fredrik Liljegren giving it a direct line back to the original.

Part of what the company describes as one of 'our upcoming adventures in the field of game-archaeology,' suggesting that more unreleased titles could follow, Hardcore's cancellation is described by the company as 'a shock for everyone involved, especially for the developers who were committed to their project and working very hard. For the following two decades, the game was considered to be lost forever.

'For many years, Hardcore was just a myth. Except for a few people, no one has ever seen or played this gem. But thanks to friends and our wonderful "A-Team", the original data has finally been recovered. So after more than 20 years of deep sleep, Hardcore (working title) will finally be published in 2019!'

The game, a classical run-and-gun platformer in the 16-bit style, is being developed on original Mega Drive hardware, the team have revealed, and will then be ported to Sony's PlayStation 4 and PlayStation Vita consoles. Sony's ownership of Psygnosis, however, means that it's unlikely to be released on alternative platforms, leaving Xbox, Switch, and PC gamers out in the cold.

'I know the care, love, sweat and hard work that went into creating Hardcore it in the first place by all involved parties,' says Liljegren of the project. 'Thus, I think it is fantastic that this product finally gets to see the light of day and for people to be able to play it finally.'

More information on the game, including a teaser video, is available from the official website.