Worst game ever played for charity

The first question on your mind has got to be; what is the worst game ever? Pro Cycling Manager 2007? Dirty Dancing: The Game? Train Cab Simulator? Nope.

The worst game ever is...Penn and Teller's Smoke and Mirrors. Although not actually released, it was an old Sega CD non-game in the style of Takeshi's Challenge. The game was essentially a bundle of mini-games which were supposed to be used by gamers to trick their friends, with the exception of the Desert Bus mini-game which was a trick on the gamer.

The game involved driving a tour bus from Tuscon, Arizona to Las Vegas, Nevada. In real time. At a maximum speed of 45 MPH. For one point. There's no scenery to give the player anything to look at - only a bug which hits the window on the return journey (which nets another one point) and the bus constantly glides to the right, so you can't just tape a button down. The whole journey takes eight hours each way and there's no save option. At night you have only headlights to guide you and leaving the road means you have to be towed back to the start - also in real time.

So, yeah, it was pretty bad. Torturous even.

As part of a charity event though, the team at LoadingReadyRun has signed themselves up for the torture. Fans can donate or sponsor the team and over $1000 dollars has already been raised on the condition that the team does the journey back and forth for a constant 64 Hours.

If you think that's bad then you should have seen the time I discovered Morrowind. I didn't come out of my room for a week and almost missed the hand in date for my dissertation. That's hardcore.

There's gameplay footage if you want to check out the real mundane reality, otherwise just head to the forums and let us know what you think is the second worst game ever. 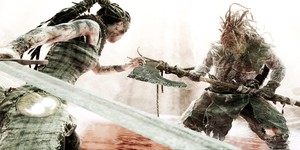 The full name is actually "Penny Arcade Adventures: On the Rain-Slick Precipice of Darkness", but we couldn't fit it in the headline. No matter. The real issue is whether or not Tycho and Gabe can make a game worth playing. We take the Xbox 360 version out for a spin...

Bizarre Creations, the developer behind the PGR series and Geometry Wars, is raising money for charity again. Go! Donate!