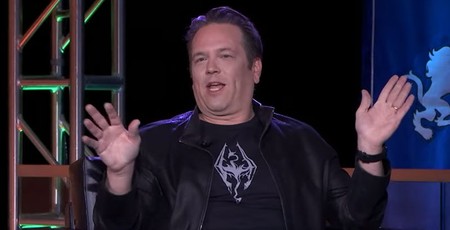 Earlier this week Microsoft's ZeniMax acquisition completed, shortly after it was passed by regulators like the FCC in the US, and the EC on this side of the Atlantic. Microsoft's $7.5 billion investment bolstered its games studios by adding; Bethesda Game Studios, Id Software, ZeniMax Online Studios, Arkane, Machine Games, Tango Gameworks, Alpha Dog, and Roundhouse Studios to its already considerable developer roster.

Naturally, Microsoft intends to make the most of upcoming IPs from these celebrated studios not just by selling their games on all platforms willy-nilly, but to use some degree of future output to promote PC and Xbox gaming – or more precisely, "platforms  where Game Pass exists".

In a video discussion about the successful acquisition Xbox chief Phil Spencer talked about various aspects of the deal including the thorny topic of platform exclusivity. "If you're an Xbox customer, the thing I want you to know is this about delivering great exclusive games for you that ship on platforms where Game Pass exists," asserted Spencer. "The creative capability we will be able to bring to market for Xbox customers is gonna be the best it's ever been for Xbox."

The Game Pass centric transition is going to take some time. For example titles like Deathloop and GhostWire: Tokyo are already signed up to be PS5 exclusives, at least for an initial period. Microsoft is of course going to fulfil any contractual obligations that stand. Furthermore, it will fully support existing games on other platforms. It even envisions continuing legacy series on multiple platforms.

Going forward, it sounds like Microsoft will push ahead with more and more Game Pass exclusives though. Working on a "case by case basis" it will consider future Bethesda titles on non-Xbox or PC platforms. In related news 20 Bethesda games will become available to Xbox Game Pass subscribers today, with 12 of those destined for the service being completely new to the platform.