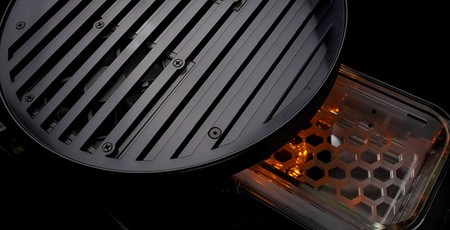 KFC has overnight become a power in PC gaming. The iconic poultry-based fast food brand has teamed up with Cooler Master to create the KFConsole which the firm had previously teased (it wasn't a joke) as a PC hammer to beat down the next gen consoles from Microsoft and Sony.

While the appearance of the KFConsole might tickle your funny bone – it is built into a traditional takeaway chicken bucket shaped chassis and is fitted with a drawer designed to keep approx two Colonel's secret recipe drumsticks nice and warm – the internals are not to be sniffed at. The makers trumpet this machine's PC gaming capabilities for 4K, VR-ready, 240fps, and raytraced games.

In addition to the heavily customised Cooler Master NC100 chassis the KFConsole is a PC which wields the following impressive components:

Returning to the KFConsole design, Cooler Master says that the modified NC100 was built by "our expert Mod team lead by the legendary Swedish craftsman Timpelay". It is quite a mod, as the original NC100 is a much more traditional rectangular shape and of course completely omits a 'chicken chamber'. With the price of this PC concoction likely to be edging towards US$3,000 (The NUC alone accounting for half that sum) I personally wouldn't use the specially designed retractable tray to keep fast food warm.

Official pricing and availability are yet to be announced.