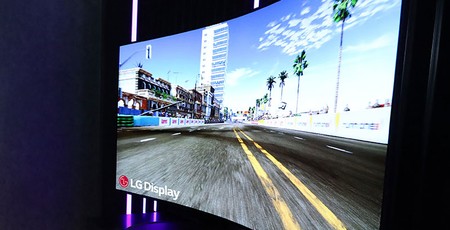 LG Display is teasing a high tech new gaming monitor that it will be showcasing at CES 2021. The new 48-inch monitor will leverage several cool technologies such as Bendable OLED, Cinematic Sound OLED, plus VRR to create a virtual crowd pleasing and aspirational design.

In a press release LG Display says that its new maximised tech monitor is "the world's first 48-inch Bendable Cinematic Sound OLED (CSO)," and according to one of its top execs it "offers the very best gaing environment to gamers". The suggested use of this 48-inch object of desire is – use it as a flat screen to enjoy movies and TV shows, then engage the curve with a press or a button (up to 1000R) to enjoy highly immersive gaming.

We don't have that many specs for the new 48-incher, hopefully features like resolution, colour gamut and accuracy will be fully revealed next week. However, we do know that this monitor has a 0.1ms response time, 40 to 120Hz refresh rate with VRR, an impressive contrast ratio, low blue light, and is flicker free. Another key attraction of this 48-inch bendable display is expected to be its audio. LG has slimmed down its screen exciter tech from 9mm to 0.6mm and made it flexible to work with this bendable monitor, delivering what it calls CSO. Previously we have seen smartphones using similar tech where the screen vibrates to act like a speaker, and help realise the all-screen smartphone dream. In this large screen implementation LG hints that the audio emissive display will mean sounds can come from the various objects and people on screen to provide a realistic sound landscape.

Whether this is a 'concept monitor' or something that will be marketed to enthusiasts remains to be seen and we will surely find out a lot more about it, perhaps even pricing, next week at CES 2021.