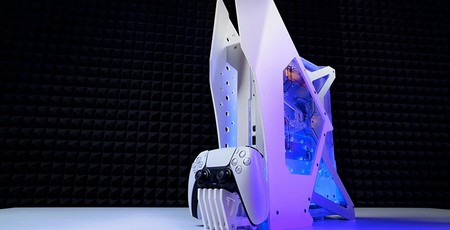 Custom PC designer Nhenhophach has built a rather fetching water-cooled PlayStation 5. The process, partly documented on YouTube, took two months and involved the deconstruction of the original PS5 design then the creation of custom cooling plates and parts so that a custom water cooling loop could be implemented. Pleasingly the water cooled PS5 is somewhat smaller than the original while retaining its folded wings aesthetic and adding the option for eye-popping RGB lighting effects enhanced by the transparent inner structure. Previously, Sony engineer Yasuhiro Otori has explained that the chunky air cooling setup is a major contributor to the console’s size. Meanwhile, the modder seems pleased with his creation's thermal performance (thermal test video section from 8mins 30s onwards).

As per the story headline, Nhenhophach states that he intends to commercialise his PS5 liquid cooling works in some way. Such implementations are being worked upon it is claimed. Another interesting development is that the modder is working to integrate this water cooled PS5 into a PC build somehow. Further details are promised for upcoming videos. People involved in complementary businesses which could help commercialise a liquid cooled PS5 are encouraged to get in touch with Nhenhophach.

So far Sony hasn't released any custom colour or alternate finished versions of the PS5, and it hasn't committed to doing so. However, the Video Games Chronicle says Sony is working on DualSense controllers in colours other than black and white.