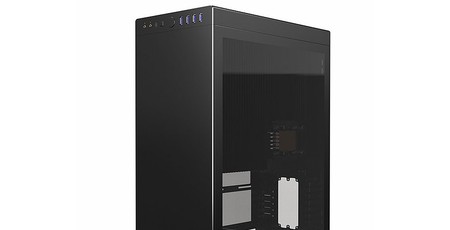 Custom PC systems maker MonsterLabo, which specialises in silent/fanless solutions has released a video showcasing its latest design – The Beast – playing the demanding Microsoft Flight Simulator 2020. So far – so ordinary, but The Beast comes packing an AMD Ryzen 3800X and an Nvidia GeForce RTX 3080 running with a dual passive-only cooling system which keeps the CPU to a stable 75°C, and GPU at a stable 65°C, while tackling Microsoft's popular sim at 1440p ultra-wide.

You can see above that The Beast doesn't thermally throttle with the Ryzen 3800X CPU reaching a stable 75°C after several minutes of gaming, and the GeForce RTX 3080 GPU settling at about 65°C. MSFS 2020 is well known as a demanding title but the massive passive cooling system keeps it all running smoothly as well as the computational hardware can usually manage at this resolution (3440×1440) and ultra settings. The Beast is a fanless ATX case with the following key components:

According to MonsterLabo, The Best can cool up to 400W completely passively (150W CPU and 250W GPU) but the optional twin case fans can up the thermal load handling capability to 600W while still claiming to be 'silent'.

Other features of this 450 x 380 x 210mm ATX case are the compatibility with a wide range of motherboards – from mini-ITX to ATX – as well as being capacious enough for graphics cards up to 290mm long after the removal of factory cooling. Buyers can mount up to 4x 3.5-inch HDDs, or 8x 2.5-inch SSDs. Construction is from 6mm aluminium, with side panels from your choice of tempered glass or aluminium. On the front you have easy access to the power button, audio & micro, 1x USB C, 2x USB 2.0, 2x USB 3.1 Gen.2. The Beast is only up for pre-order right now, and it costs from €750. MonsterLabo says it has 20 units remaining for those that order in time to get the first batch in the current quarter. Otherwise, you will have to wait until Q3 this year. If you are interested in pre-ordering I would double-check those detailswith the seller as they seem a little out of date.