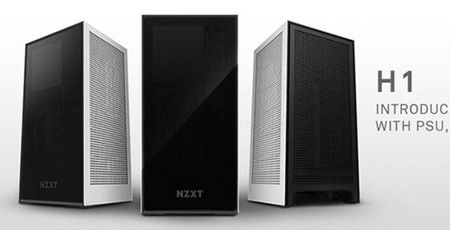 In the wake of various social media discussions about NZXT H1 computer cases, smoke, and fires this weekend NZXT has responded with an official blog post on the topic. NZXT admits there is an issue with these compact Xbox Series X inspired cases but says that it knows of fewer than 10 users who have reported safety problems. However, the problem is a serious one, as it is in NZXT's own words, "a potential fire hazard".

Checking through various Reddit posts you can see complaints from owners of the NZXT H1 that systems built into these cases can emit smoke or even flames when powered up. Just because a system doesn't exhibit these issues on first power up doesn't indicate to me that the system is therefore verified to be safe.

NZXT engineers have identified the source of the problem as being "two screws that attach the PCIe Riser assembly to the chassis". It says that these screws can cause an electrical short in a PCB. Thus NZXT has readied a "repair kit" which sounds like it contains just two new screws and an instructions sheet. Taking the above statements together it sounds like the original supplied screws were so long they would push through the supports and interfere with a PCB below when fully tightened. This would partly explain why some people and not others were affected by the issue.

If you own an NZXT H1 it is recommended that you stop using the system that it contains until you receive and apply the fix kit. To get the official repair kit you are expected to contact NZXT support via a dedicated email address, and they will reply asking for your name, address, order number, product serial number, and third party receipt. That sounds rather long winded to get two shorter new screws... Perhaps it would be helpful for NZXT to publish the screw specs and repair sheet so people can avoid the wait for the 'repair kit'. If any Bit-Tech readers own an NZXT H1 case it would be particularly interesting for you to comment on this news and any thoughts you have on the PCIe Riser assembly attachment screws.