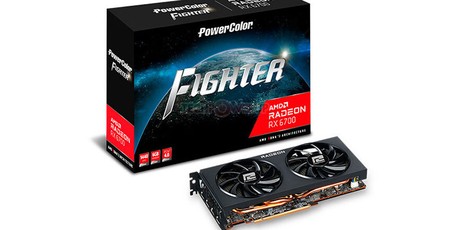 PowerColor has apparently sent out press materials rather prematurely to a number of tech websites. The AMD exclusive partner, most famous for its devilish GPU concoctions, is apparently lining up a new product based on the as yet unannounced Radeon RX 6700 (non-XT) GPU. This graphics card will join the new Fighter family which was established with the launch of the RX 6700 XT just last week. Both TechPowerUp and VideoCardz appear to have received these images without PowerColor holding them to any NDA. The clearest and most informative image for our purposes is reproduced above, showing the PowerColor Radeon RX 6700 Fighter packaging with some important specs call-outs present.

Reading from bottom left to right you can see that despite the reduced specs, most notably a halved VRAM quota, the Radeon RX 6700 is still being promoted as a 1400p gaming graphics card by AMD and partners. Secondly, you can see the RX 6700, or at least this SKU, comes with just 6GB of GDDR6. Strikingly, this is a downgrade compared to the previous gen RX 5700 (8GB). Lastly, PowerColor marks this as a PCIe 4.0 interface ready GPU. Winding back to the topic of 1440p gaming. It is expected that the RX 6700 will pack 36CUs, a small step down from its RX 6700 XT brother (40 CUs). However, the memory deficit is very large, and of course this is more important as we bump up gaming and texture resolutions, as one would naturally wish to do.

From previous leaks it doesn't look like the RX 6700 is going to be a 6GB only SKU, there have been sightings of Asus branded cards going through regulatory systems which come packing 12GB. So it looks like AMD and partners are going for a two pronged RX 6700 attack on the market to more fully cover user wants / needs.

With PowerColor accidentally mailing out these images it looks like launch / release will be imminent. The next concerns are going to be real-world performance, as well as availability and pricing, of course.