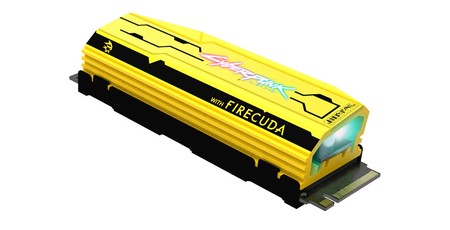 Seagate first launched its FireCuda 520 SSD, aimed at gamers, back in November 2019. These are M.2 2280 form factor drives that were one of the first to market boasting a PCIe Gen 4 interface, and were thus a great option for 3rd Gen Ryzen platform buyers at the time, looking for the ultimate storage performance. Phison has since released the E18 controller for speeds breaking the 7,000MB/s barrier, but the Seagate FireCuda 520 is not to be sniffed at. Perhaps Seagate has a couple of thousand of these drives gathering dust on shelves, due to its premium pricing, and has now come up with a wheeze to sell more with a bit of gamer focussed upcycling, as it has introduced the FireCuda 520 Cyberpunk 2077 Limited Edition 1TB.

I've checked through the specs and the only differences between the original FireCuda 520 and the Cyberpunk 2077 edition are the cosmetics, particularly the heatsink and lighting, and the fact that the new version is 1TB only, while the regular version is also sold in 2TB and 500GB capacities. So, the main attraction of the FireCuda 520 Cyberpunk 2077 SSD is the heatsink which as you can see is quite a visual hit. In addition to its size and colour scheme, the heatsink has an RGB LED backlit Cyberpunk logo with full lighting and pattern control via a 5v addressable RGB connection cable (provided). Seagate requests that users do not remove the factory installed heatsink "as it can damage the device".

If you are looking at the original FireCuda 520 1TB the MSRP is US$221. I have found Taiwanese electronics retailers selling the fancy new Cyberpunk 2077 limited edition for the equivalent of US$240, which isn't really much of a premium considering the aRGB lighting and heatsink that have been added. I'm not sure about the regional rollout of this product, but there will only be 2,077 made available worldwide.