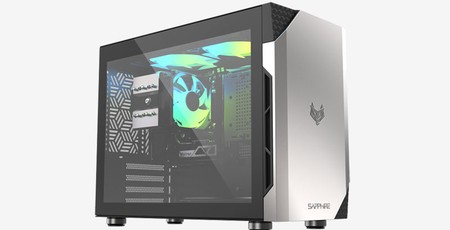 We have seen several other PCs, components and accessories makers widen their portfolios in recent years and months – sometimes significantly. Examples I can think of without scouring Bit-Tech news include NZXT's move into pre-built systems, MSI's addition of PCIe SSDs to its portfolio, and G-Skill's move into PC gaming peripherals. News of a similar nature has come to light via Twitter hardware leaker momomo_us – Sapphire has published product pages for a PC case and CPU cooler on its Chinese language site. Hopefully this just means that China is seeing / getting these products first and not they will be East-Asia exclusive. The new Sapphire Nitro M01 computer case is a compact model for Micro ATX and Mini ITX motherboards. It measures 392 x 185 x 303mm, and weighs 5.3kg. Other key features of the case are its room for twin 120mm fans up top, a 90mm rear fan, and twin 120mm fans in the bottom. Other max compatibility figures are the 155mm CPU cooler height, 335mm GPU length, and you have a choice of ATX or SFX PSUs.

Sapphire's design is not too fussy, with a silver front sporting the company logo centrally, framed by black equilateral triangles top left and bottom right. An expansive glass window is featured on the left side. Sapphire promises some dazzling RGB lighting, and I can see those front black triangles are one area where RGB LEDs are employed to shine out – perhaps some supplied fans are RGB too. Lastly, across the top, from left to right, you have access to the power button, LED button, 2x USB 3.0, a headphone, and a mic jack.

Sapphire's CPU cooler looks quite a stylish and substantial device. Dubbed the Sapphire Nitro LTC CPU Cooler, it has the following key features, as per Google Translate: The Nitro LTC measures 92.5 x 105 x 134mm and offers 35mm RAM module clearance. It appears to exclusively support AMD AM4 socketed CPUs at this time, and is capable of cooling CPUs with up to 100W TDP. In addition to the heatpipes and aluminium heatsink there is a 92mm fan moving the air, running at PWM speeds of between 450 and 4,500 RPM. We don't have any noise data for now.

Both the Sapphire Nitro M01 computer case and Sapphire Nitro LTC CPU Cooler are listed without pricing and availability info. Hopefully they will go official in the west soon, alongside this important info.