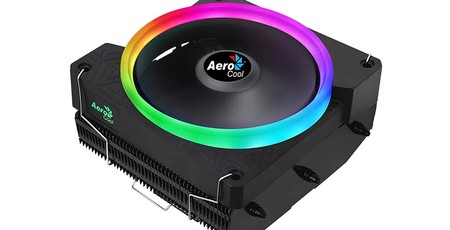 Aerocool has added a new CPU air cooler to its stables. The new cooler is called the Cylon 3H and is a top flow design, powered by a 120mm fan surrounded by an aRGB ring, and it measures 98mm tall. Under the fan are an array of black coated aluminium fins, threaded with triple heatpipes which permeate the CPU cooling block for direct contact with the processor IHS.

The new Aerocool Cylon 3H aRGB CPU cooler measures 126 x 138 x 98mm and is said to be capable of cooling CPUs up to 125W. Aerocool's design is quite fetching with the dense black mass of the finned cooling block crowned centrally by the aRGB fan ring. To twiddle with the aRGB settings you will likely be happy to hear that the Cylon 3H is compatible with a host of aRGB motherboards (Asus Aura Sync, MSI Mystic Light Sync, and Gigabyte RGB Fusion), as well as lighting hubs like Aerocool's H66F. A 3-Pin XWD connector is provided. In proximity to the CPU are a trio of 6mm copper heatpipes which have been ground down to form a perfectly flat surface for maximum contact with the IHS. These three heatpipes thread through the large finned aluminium block with black coating for heat absorption. Last but not least we have the PWM high pressure 120mm fan for powerful airflow and low noise. The fan has a hydraulic bearing, runs at 600-1800 rpm, for 24.1-60.8 CFM air flow, and 13.3-24.3 dBA noise levels. Its MTBF is 60,000 hours (6.8 years). The Cylon 3H uses approx 6.8W in operation. Aerocool's Cylon 3H aRGB CPU cooler is compatible with a wide range of modern AMD and Intel motherboards with fittings supplied for the following sockets:

Aerocool touts the affordability of the Cylon 3H but I don't have pricing at the time of writing. As an indication, the previous revision, the Cylon 3, is listed on Amazon UK for £29, discounted from £38.