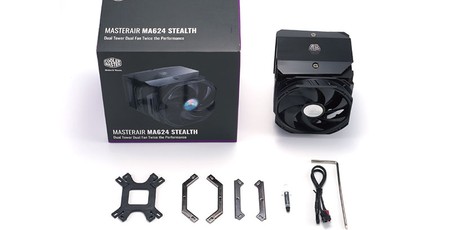 A beefy new Cooler Master CPU cooler has appeared in the online store of a Hong Kong retailer Ramboxs Technology Ltd (via Momomo_us). The previously unannounced Cooler Master MasterAir MA624 Stealth had so far lived up to its name, but having been decloaked we can see this all-black CPU cooler is perhaps the firm's biggest air cooler yet – bigger than the 2019 vintage the MasterAir MA620M in two out of three dimensions.

Ramboxs provides a nicely detailed listing in English with official looking Cooler Master PR slides pasted in. It includes availability and pricing too. Perhaps the most attention grabbing thing about the MasterAir MA624 Stealth is its sheer size. For clarity and quick reference I've put together an set of essential specs bullet points below:

Users have a number of options with the three fans that are provided. Since you've bought them you might want to use them all and you will use a 140mm in the middle, and another at the end. This is how the cooler is supplied, with the 140mm fans pre-installed, and as pictured in the main image drectly above. The third 120mm fan can be added to push in air from the area over that typically used by your RAM sticks and its smaller diameter means that it provides 70mm memory module clearance in this mode. For those interested in the greatest of stealth you can remove the 140mm fan at the other end (as supplied) leaving just the central 140mm fan to actively cool your CPU.

Even though it is bigger than the MasterAir MA620M (which is 135 × 125 × 165mm) in two dimensions the new MasterAir MA624 Stealth provides a better CPU cooler maximum compatibility figure of 160mm (height).

The Hong Kong-based retailer says that the new CPU cooler is available now and it is priced at HKD$785, which is approx £75 but I think it would need VAT adding on to that sum.