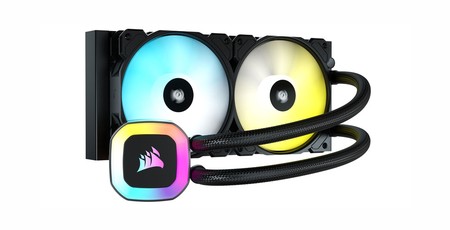 Corsair has announced a trio of new AiO CPU coolers with immediate availability. The names of the Corsair H55 RGB, H100 RGB, and H150 RGB Coolers might seem familiar, as they build upon the likes of the H55, which initially launched in 2012, but update the designs with the latest Corsair technology, in particular the Corsair SP120 RGB Elite fans with AirGuide technology. The new coolers will deliver low-noise performance cooling with an abundance of vivid, motherboard-controlled RGB lighting at an attractive price, says Corsair. If you have any experience with Corsair AiOs, you won't be surprised that the H50 comes with a 120mm radiator attached, the '100' a 240mm radiator, and the '150' with a 360mm radiator. Pick the one that suits your build and cooling demands. Corsair says that its new SP120 RGB Elite fans, a major component of these new designs, runs at up to 1,500 RPM, and the AirGuide tech's advantage is that it concentrates the airflow and is claimed to offer "improved low-noise performance". Other key components of this closed loop cooling family include the "thermally optimised copper cold plate, and low-noise pump".

The introduction of RGB is a major thing with this new range, and Corsair says that these coolers join up with your motherboard's +5V addressable RGB system for cool syncing effects. The pump block features 13 LEDs, and each fan in your radiator has eight LEDs. It confirms support for the big name aRGB standards such as Asus Aura Sync, MSI Mystic Light, and Gigabyte RGB Fusion.

Corsair says these coolers are easy to fit with modular, tool-free mounting bracket for quick  installation on all modern CPU sockets, including LGA 1200,115X, 2066, and AM4. It even includes pre-applied thermal compound, should you wish to use it.

The Corsair H55 RGB, H100 RGB, and H150 RGB AiO CPU coolers are all said to be available now, from your usual tech retailer or Corsair direct, and buyers get a three-year warranty. Availability and pricing will of course vary depending on your location. The official product pages were yet to go live at the time of writing, so I couldn't check pricing.