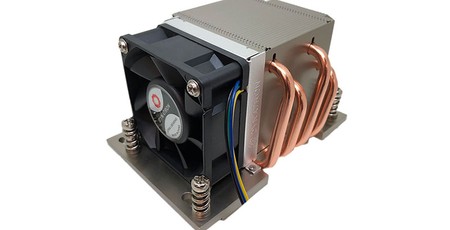 A new CPU air cooler from US-based Dynatron has appeared in the firm's product pages. The new Dynatron A38 CPU cooler is aimed at AMD Threadripper and Epyc processor users, and designed to fit into the 2U Server form factor, so is quite a specialized design, but it might be interesting for some PC custom builders nonetheless.

The Dynatron A38 CPU air cooler is designed to cool up to 280W processors from the AMD Threadripper and Epyc processor stables installed in SP3/TR4/sTRX4 sockets. It is moderately weighty at 450g, measures 119 x 79 x 65mm, and uses an aluminium finned heatsink with a quartet of embedded heatpipes – all of which are ho-hum specs. However, this low-ish profile chunk is pretty exceptional in the fan that comes equipped with it.

Dynatron has equipped its A38 with a 60mm fan (25mm depth), which helps keep the Z-height low. These smaller fans are out of favour with PC builders as they typically make more noise to push a certain volume of air, but Dynatron hasn't held back with this unit's RPM to mitigate this.

The own-branded fan (made in China) is a dual ball bearing type, said to have excellent durability but, depending upon your CPU stress, can ramp up to 11,000 RPM. This extraordinary speed generates 58.31 CFM air flow, but generates a librarian-unfriendly 59.8dBA. According to the American Academy of Audiology 60dBA is a 'moderate' sound level, on a par with normal conversation, or a dishwasher doing its stuff.

Dynatron's A38 CPU air cooler comes with Shin-Etsu X23-7762 thermal compound pre-applied, and uses a simple screw-based mounting system for the sockets mentioned above, but can consume up to 18W at full pelt. Dynatron hasn't revealed pricing.