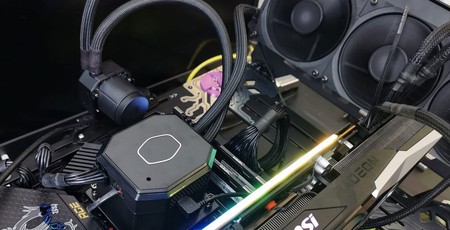 There is hope that Intel will launch some highly compelling desktop CPUs before 2021 is out – namely the Alder Lake-S 12th generation Core processors. As well as delivering one of the biggest changes to its consumer CPU architecture for years with the hybrid cores, and a move to 10nm SuperFin, this change will bring in tow a new socket and repositioned mounting holes according to a new leak. Moving back to positives, the introduction of ADL-S with the Intel 600 Series chipset is signalled to bring lots of new features such as; PCIe Gen5 support, Thunderbolt 4, Wi-Fi 6e, and DDR4/DDR5 support.

Igor's Lab has published a report including diagrams of a new boxed cooler from Intel, and an updated Cooler Master Cryo Cooler made in close collaboration with Intel. The upcoming new socket has both a different Z-stack total height (including the installed CPU) which is reduced by about 1mm, and a new mounting hole arrangement, according to Igor. We already knew the socket will change from being square to rectangular.

It is thought that the symmetrically designed Intel boxed cooler will only be provided with solutions of 65W TDP or lower. Higher power CPU buyers will likely have to budget extra for a CPU cooler, and perhaps the top-end products will include the new Cooler Master MasterLiquid ML360 Sub-Zero as an option.  This bulky solution uses peltier tech and sucks up as much power to do its cooling as the processor consumes to crunch data. Igor refers to this cooler variously as "a complete failure… an ecologically questionable toy… and a nice marketing stunt," which could easily be made redundant with "any normal AiO compact water cooler". So, what of the compatibility of your existing CPU cooler should you decide to move along to ADL-S? We have already seen confirmation from Noctua, as far back as January, reassuring a user on social media that his NH-U12A should be usable on an Alder Lake-S LGA1700 system "via an upgrade kit". The larger rectangular ADL-S heatspreader still fits comfortably under the square cooling block of this cooler, and thus many others, one would expect.

Whether your current cooler maker will provide free, paid, or any mounting upgrades at all, will vary by the brand / age of the product.