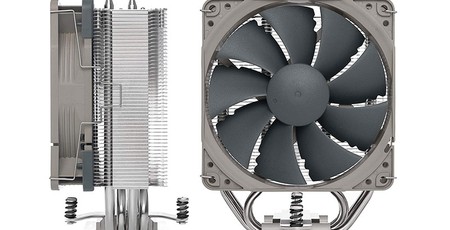 Noctua has launched the first CPU cooler to join its redux line of reduced price parts. The Noctua NH-U12 redux is, naturally, based upon the tried and tested Noctua NH-U12, which has been around for nearly a decade. So, what has been cut to create the more affordable alternative? Read on and find out. The major changes implemented by Noctua to trim the NH-U12's build cost are as follows:

A full spec rundown comparison between the NH-U12A, NH-U12S and NH-U12S redux is provided in the table below. As with any affordable line of products buyers will weigh the costs and advantages between the cheaper and more expensive versions. The price difference is actually quite small especially when taken as part of an overall build cost, just €10, as shown in the table above. At this time buyers will have to judge this decision from the spec, as we don't have a review unit, and neither have I spotted any reviews elsewhere. For further comparison though, you can take a look through Noctua's specially prepared video, below.

Noctua's NH-U12 redux, and the optional second fan kit, is available now via the firm's Amazon outlets in various countries.